Laptop design doesn’t have to be boring. Although often laptops look exactly as we expect them to look like, there is a number of design solutions and approaches which are completely different — unusual, creative, beautiful and damn useful. In fact, over the last years designers came up with a number of interesting concepts which have somehow stuck between the prototyping stage and the production stage. Nevertheless, much is possible. And this post is supposed to prove this point.

Laptop design doesn’t have to be boring. Although often laptops look exactly as we expect them to look like, there is a number of design solutions and approaches which are completely different — unusual, creative, beautiful and damn useful. In fact, over the last years designers came up with a number of interesting concepts which have somehow stuck between the prototyping stage and the production stage. Nevertheless, much is possible. And this post is supposed to prove this point.

Below we present innovative laptop designs and laptop concepts. Many of the products listed below are prototypes and aren’t available yet, and it’s unknown whether they’ll be released over the next years. However, they give us an idea of what we should expect from laptops over the years to come.

You might want to take a look at our posts

The Siafu concept notebook, designed for the blind by Jonathan Lucas, omits a display altogether. Images from applications and Web sites are converted into corresponding 3-D shapes on Siafu’s surface.”

Cario notebook from Anna Lopez can be carried around by its handle, positioned like an easel or placed on a car’s steering wheel. When the car’s not in motion, the Cario can project maps, video conferences and more onto the windshield.

Being portable, MacTab is the complement to MyBook in the high-end. The thin wireless keyboard is used as a protection cover for transportation. On the back of the computer a hinge allows it to be put in a vertical position so you can use it on your desk.

Dialogue is going to release the Flybook V33i series with a laptop screen which can be moved across its axis. A nice alternative to a static laptop screen we’ve seen over the last years.

The Vaio Zoom notebook takes everything we know about holographic technology and squeezes it inside a thin glass form factor. When off, the screen is completely transparent and the keyboard goes opaque. Turn it on and the touchscreen holographic festivities begin. Even the mouse buttons are holographic! [via Gizmodo] 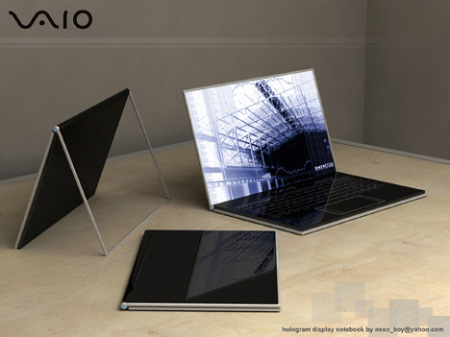 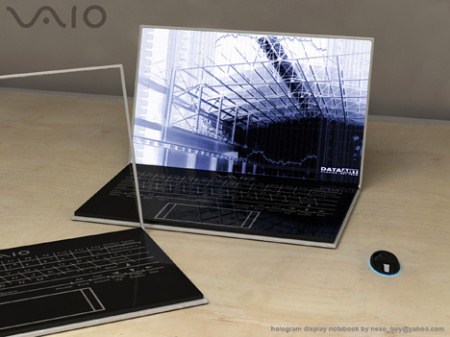 Use the pedal to turn digital sheet music or just touch the screen. It also throws in some computer functions by allowing on the fly scoring, note taking, and collaborative writing. When you need a real computer, a keyboard slides out from underneath the screen and use the foot pedal as a stereo to enjoy the music you just played. Designed by Sungho Lee.

Felix Schmidberger’s Compenion laptop has a OLED touch screen. The computer itself has an OLED touchscreen, where you can directly work on, much like with a umpc or pda. The whole screen is a slider, as it can be moved forward to reveal a second OLED touchscreen underneath, where you can have a keyboard or working controls, similar to a setup with 2 monitors.

Purity Notebook: right now the in thing with notebook computers are clean lines, and minimal design features. The Purity Notebook takes that to the extreme but manages to throw in a few of its own unique touches like the high lacquer finish.

MacBook 0801 is a laptop concept by Isamu Sanada. The keyboard is transparent and ultra-thin.

Laptop Made Of Wood. Yes, that’s right, wood. Nevermind the weight and horrible heat insulation characteristics of the material, it’s supposed to look refined and sexy, at which it does.”

Sung-kyu Nam’s DesCom laptop integrates into the desktop surface. And what do you have to do once the laptop is dead or should be repaired? 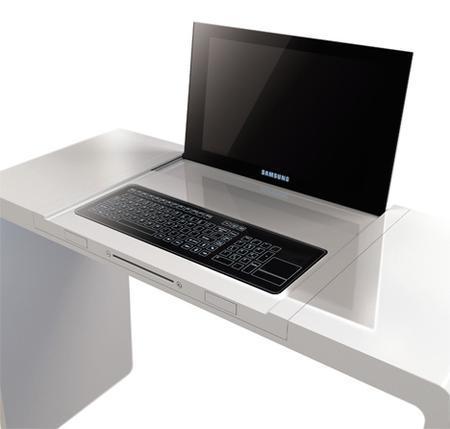 Lenovo/IBM’s Thinkpad is coming back, in a new outfit: Thinkpad reserve edition. The laptop’s components are separated; dual-monitor can be placed on the surface allowing multiple people to observe what’s happening on it.

Satellite Navigation Laptop is Nikita Golovlev’s concept for travelers. Using an e-ink display, the ‘Traveller’ is a GPS enabled navigation system for pedestrians. The design incorporates an internal drive for storing any photos you take along the way and will tag the with GPS data, so you know just where you took them.

Solar-power laptop is supposed to save you the trouble of charging batteries by plugging them in. The notebook is powered with the help of powerful batteries that are recharged by wide Solar Panel attached to the computer (currently offline).

Haier has announced a laptop/tablet PC which folds down into a tablet, replete with handwriting recognition and has a 8.6-inch widescreen tablet display. Price: $4,790.

This laptop has a folding multi display which is supposed to be used as a server. Expected to be available in 2008.

For its annual design issue, The New York Times wanted to include a futuristic laptop for teenagers. The project’s main thrust was to re-think the future of education and then construct a laptop that would best deliver that vision. The end result is The Gelfrog, a dynamic, portable device concept that enables new educational experiences without sacrificing the need for individuality.

myBook might be the lightest portable Mac ever. Small, light and semi-rugged, It roots deeply in Alan Kay Dynabook’s dream. The touch-sensitive screen is readable in bright daylight thanks to the use of a new transflective generation of LCD screen. The screen rotates 180°. In that position, keyboard and trackpad are inoperative and the screen goes in portrait mode.

That’s such a simple design, but so useful and nice. This Mac-handle is constructed of aircraft aluminum, so it will make sure the laptop doesn’t fall down when you carry it around. Price: $49.99.

No, that’s not a new concept, but it looks incredible. From Apple Powerbook 180 with Mac OS 8 to iBook g3 with OS X 10.4. “This is an actual photo. Every screen is showing exactly whats behind it - relative to the camera, which was on a tripod. The most difficult task was to convince the old powerbook 180 to show a simple jpeg. Netscape Navigator 3 did it.”