Alexander Makarov is a professional Web developer in Russia. He is also the person behind RMCreative, a Russian blog dedicated to Web developers, designers and … More about Alexander ↬

Quick summary ↬ Everyone wants to be more productive, make fewer mistakes and write good code. Of course, that all depends on you, but in most cases integrated development environments (IDEs) can help you achieve those goals more easily. Unfortunately, choosing the right IDE is very difficult because a lot needs to be considered. And the website of almost every IDE tells us it is the best one.

Everyone wants to be more productive, make fewer mistakes and write good code. Of course, that all depends on you, but in most cases integrated development environments (IDEs) can help you achieve those goals more easily. Unfortunately, choosing the right IDE is very difficult because a lot needs to be considered. And the website of almost every IDE tells us it is the best one.

In this post, we’ll take a close look at the most popular PHP IDEs, exploring their functions, comparing them in a table and drawing some conclusions. Hopefully, you’ll get an idea of what each PHP IDE has to offer and which one best fits your needs. 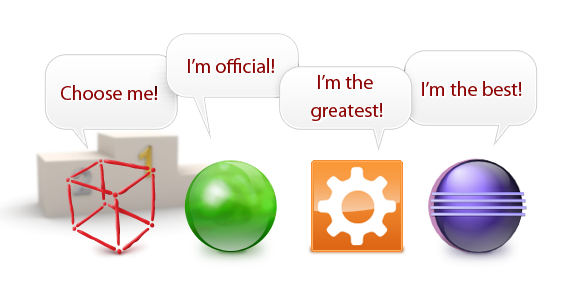 For a long time, I worked in PHP only for fun. I’ve developed Java Web applications with Eclipse and IntelliJ IDEA. These are a great Java IDEs. Not surprisingly, I wanted something similar for PHP. The following are some of the features that I found needed to be considered. 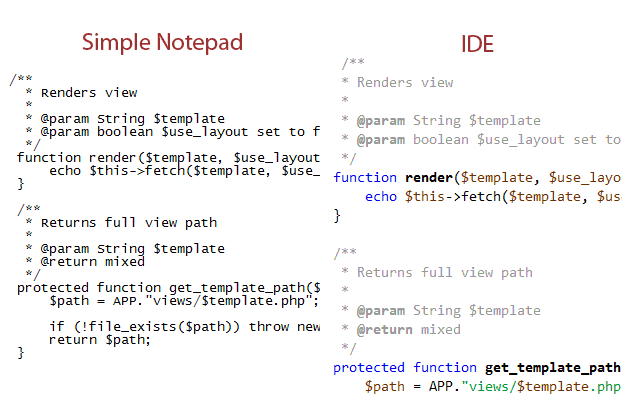 Automatic code suggestions can help the developer avoid having to type so much. If it supports custom classes and phpDoc, it can even save you from having to read project documentation.

Good code completion can also prevent typos. For example, if typing $cotroller-> does not show you any suggestions, you’ll know something is wrong. Uh oh… it should be $controller!

Poor code completion can slow you down if too many variants are shown or your class methods are not picked up.

It is also good to have file name completion in HTML src=” and PHP include and require.

One of the most boring things is trying to find where a certain variable has been defined or used. Some good IDEs can help with “GoTo” actions, like go to definition.

Another important feature is search. Searching should not take a long time, even with large projects. Even better is if the IDE lets you move quickly to the next occurrence of a search phrase, like Firefox does with its Quick Find feature.

On-the-fly syntax checking can prevent various typos and common programming mistakes. In the example below, the IDE indicates that you may have used = instead of ==:

The more the IDE detects, the better – except false positives, of course.

Refactoring is basically a set of techniques for turning weak code into solid code. Its implementation in PHP IDEs is very weak compared to that of compiled-language IDEs, such as Java and C, but it’s still very useful.

In addition to basic refactoring, some IDEs can generate code for class constructors, getters/setters and even stub methods for a parent class. 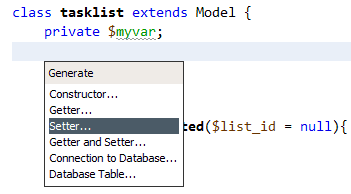 Debugging is not so critical in PHP because you can add echos or use something like FirePHP without even having to recompile your code. But for complex applications in which you need to add echo after each line to see what’s going on, debugging can save you hours.

If the IDE is good enough, it provides you with step-by-step debugging and lets you see the current values of variables in scope.

Versioning is extremely useful for both team and one-person development. It shows what changes have been made to a file, when they were made and by whom. A good IDE allows you to visually compare revisions, copy changes from one version to another, revert to previous states and merge changes made by different team members.

When performing common checks and commits, integrating a versioning system such as CVS, SVN, git or Mercurial in your IDE is usually much better than running a separate application.

Using PHP alone is very rare. CSS and JavaScript are almost always somewhere in your application. So, good code completion, highlighting, navigation and perhaps some refactoring would be just as beneficial for the other languages and technologies you use in conjunction with PHP. 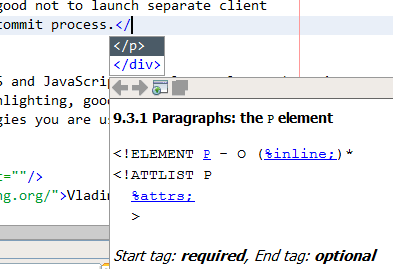 How To Choose A Good One?

Every IDE provides a lot of features. Some of those features are very useful, some are not. Here are some guidelines to follow to narrow down the one for you: 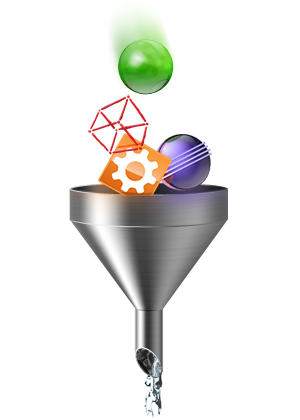 Along with Vladimir Statsenko, who helped with the section on Aptana, I’ve prepared this comparison table.

Eclipse-based IDEs PDT, Zend Studio 6, Aptana PHP and Aptana Studio Pro are built on the Eclipse platform. That means you can use any of the thousands of Eclipse plug-ins out there. If a feature you need is not integrated in the IDE itself, it is most likely available as a third party plug-in.

Eclipse PHP IDEs were the first freeware IDEs with true IDE capabilities, such as complex code completion, code navigation, projects support, etc. Most of them are still free and very powerful.

NetBeans NetBeans is the new bright kid on the block, but not built on the Eclipse platform. It has most of the features of other IDEs and yet more still. And it’s free, too.

Development of this IDE is very public, open and rapid. Following the development blog and testing new builds as they come out is very interesting, even if there is already a stable version available (v6.5).

What Was Not Covered

There are plenty of powerful notepads such as PSPad, Notepad++, TextMate, vim and Emacs. Some are very similar to IDEs and even better if you want a good text editor but not the full IDE experience. Reviewing all of the good IDEs out there would not be possible (there are so many), so only the major players are compared here.

Here is the list of PHP IDEs we included in our review:

We thought it would be interesting to allow our readers to edit the table, which is hosted on Google Docs. Feel free to add your favorite IDE if it’s not there, or note some features on the ones that are.

The full table at Google Docs (not editable snapshot)

* Codelobster and Nusphere PhpED were filled in by Russian community members.

Still not using IDE? You may be wasting time. Try it. You’ll see the difference.

Both PDT and NetBeans are good. If you need a lot of plug-ins, Eclipse is the better choice. If editing tools and code completion are more important to you, then pick NetBeans. NetBeans is a bit more responsive, too.

If you are mostly editing HTML and CSS, try Notepad++, vim, TextMate or Emacs. They all have very good HTML editing capabilities and can be configured for simple code completion. And they are faster and lighter than fully featured IDEs.

If you are editing complex JavaScript, try Aptana, which is amazing for JavaScript, or the Spket plug-in for Eclipse, which has nearly the same features.

And remember, IDEs are not meant to change the way you think. They simply speed up the development process.

Strange as it may sound, commercial PHP IDEs such as Zend Studio and Aptana Studio Pro do not have significantly more advantages than free alternatives such as PDT2.0 and NetBeans, both of which are very good.

With Aptana Studio Pro, you get a good IE JavaScript debugger, SFTP, FTPS and some other less-than-useful features for $99.

Like NetBeans, Zend Studio offers a bit more code completion and error detection than PDT. It also has a very good customizable code formatter, refactoring capabilities (which NetBeans also has) and some wizards for the Zend Framework. It starts at $399.