If you haven’t heard of Twitter by now, you must be living under a rock! It is everywhere, and everyone is using it. To say that the rise of Twitter has been explosive would be an understatement. As a result of this growth, the number of Twitter apps and tools available has become extensive. So, in this post we have filtered them down to a respectable 99.

Twitpay TwitPay is a simple way to send payments via Twitter.

Twuffer Twuffer allows the Twitter user to compose a list of future tweets and schedule their release.

TweetLater This app allows you to post Tweets at a later time and date.

Twitter Alerts Keep track of conversations that mention you, your products, your company and anything else, via hourly email updates.

Your Twitter Karma Twitter needs a decent page for your followers, with the functionality to sort them by type. This Web app does that.

StrawPoll StrawPoll is the coolest way to follow the opinions of people on Twitter. With this app, you can create your own poll.

Twiddict If Twitter goes down and you start to feel withdrawal symptoms, use this service to continue using it. Twiddict makes sure all your tweets end up going to the proper place.

Twitturly Twitturly is a service for tracking what URLs people are talking about, as they talk about them, on Twitter.

twtQpon Enhance your social media marketing by offering discount coupons to the Twitter-sphere!

twtcard Send a greeting card, a surprise message or an invitation on Twitter.

Twittertise Twittertise allows you to advertise on Twitter and track the success of your branded communications with customers.

TwitWall With TwitWall, you can embed your favorite videos and widgets and upload your photos, MP3 music, podcasts, you name it.

UnTweeps Unfollow Tweeps who have not posted tweets recently.

TwitBlocker If you become overwhelmed by a Twitter user’s constant tweets, you can keep them quiet with a single click of a button.

Twitterless Twitterless tells you who stops following you and graphs your follower history over time, displaying the info in a variety of useful views.

Twonvert With Twonvert, you can easily convert your tweets into SMS shorthand language and say more with less characters.

Postica Create a sticky note for your tweets.

TweetStats An app that tracks your number of tweets per hour and per month. It basically creates a graph based on your tweets.

twInfluence Similar to Twitter Grader, twInfluence lets you calculate the indirect influence of you and your followers on Twitter.

tweetVolume Enter keywords or a phrase and see how often it appears on Twitter.

Twist See trends on Twitter; find out what’s hot and what people are saying about it.

TweetRush TweetRush provides estimated statistics on Twitter usage over a period of time.

Tweetwasters Just how much time do you spend on Twitter? Are you wasting time?

Friend or Follow Who are you following who is not following you back?

Twubble Twubble is a Twitter extension that helps you find more friends.

Nearby Tweets Who is tweeting close to you? This app helps you connect with them.

Friend or Follow Who are you following who is not following you back?

Twubble Twubble is a Twitter extension that helps you find more friends.

Nearby Tweets Who is tweeting close to you? This app helps you connect with them.

WhosTalkin WhosTalkin is a tool that allows users to search for conversations on the topics they care about most.

Twitter Search Search Twitter is an excellent search engine that allows you to find out what’s happening in the world beyond your personal timeline.

Twitscoop Input a Twitter username or keywords in the Twitscoop search box to track a conversation, topic or conference.

twitSeeker twitSeeker is an alternate search engine for finding Twitter users and browsing the results in one interface.

Hahlo Hahlo is an excellent and fully featured Twitter client for your iPhone and iPod Touch.

TinyTwitter TinyTwitter works on any Java-enabled device and any Windows Mobile Pocket PC or smartphone.

TwitterBerry TwitterBerry is a mobile client for posting updates to Twitter from your BlackBerry.

twitxr Share pictures and status updates from your mobile.

Twitter2Go Twitter2Go provides a quick and simple way to update your Twitter status.

Tapulous Discover, connect with and send messages to people nearby. Upload photos and update your Twitter account.

Twittelator Twittelator is an all-around great new application for your iPhone.

TwitterFon TwitterFon is a simple, clean, easy to use and super-fast Twitter client for your iPhone and iPod Touch.

iTweet 2 iTweet 2 has built-in auto-refresh, search and hash tags. You can view user bios and locations and also view conversations with the “in reply to” links.

GPS Twit Run GPS Twit on your phone to make it easy for your friends to find you.

Twitter Tools This plug-in integrates your WordPress blog and Twitter account. Pull your tweets into your blog, and create new tweets from blog posts from within WordPress.

SimpleTwitter SimpleTwitter allows you to add Twitter messages to WordPress templates (and not just in the sidebar).

TweetBacks This plug-in imports any tweets that discuss your blog or post. The tweets appear as comments.

MyTwitter MyTwitter allows you to display your Tweets on your WordPress website and update your status on the MyTwitter settings page.

TweetRoll With the TweetRoll widget, you can display the number of your followers and friends.

Twitt-Twoo Twitt-Twoo is a simple little plug-in that allows you to update your Twitter status right from your blog’s sidebar. 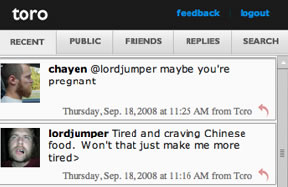 twhirl Most of the features available on the Twitter website are accessible through twhirl, with usability enhancements. 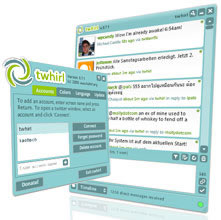 Tweetr Tweetr is a Twitter client that allows you to send and receive Twitter messages, but with some added cool features: support for taking photos with your webcam and sending files (up to 10 MB). 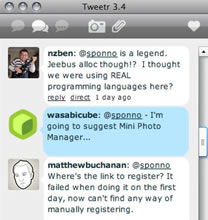 TweetDeck TweetDeck aims to improve the existing functionality of Twitter by taking the abundance of Twitter feeds and breaking it down into more manageable bite-sized pieces.

DestroyTwitter DestroyTwitter is a series of canvases that constantly update to keep tweets current and up to date using notifications that appear as soon as a new tweet is posted. 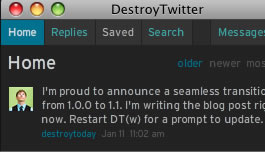 TwitterLocal TwitterLocal is an Adobe AIR-based app that allows you to filter tweets by location. 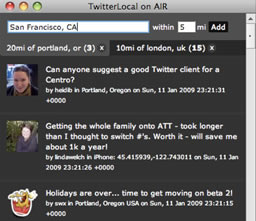 Spaz Spaz is a well-designed and well-developed Twitter client. 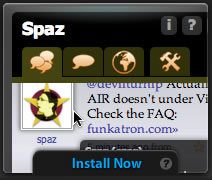 Twitch Some features of Twitch are TwitPic integration, URL shortening, the ability to combine friends and replies, reply-highlighting hash-tag support and more.

TwitBin TwitBin is a Firefox extension that allows you to keep up with all of your Twitter conversations directly from your browser’s sidebar. Send and receive messages, share links and more.

TwitterFox This extension adds a tiny icon to the status bar that notifies you when your friends have updated their Twitter status. It also has a small text input field to allow you to update your own status.

TwitterEyes TwitterEyes keeps track of your character count as you compose tweets and replaces characters if you need extra room.

Finally, Worth A Look

Is Twitter Down? Is Twitter down just for me or for everyone? This great app gives you a simple answer: yes or no.

twistori An interesting Twitter experiment: click on a keyword on the left, and see what tweets are currently being published that contain that word. 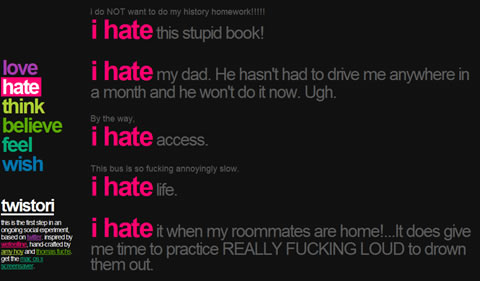 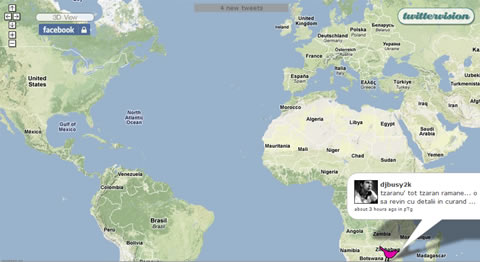 twittearth Similar to Twittervision (above) but with a sleeker interface. 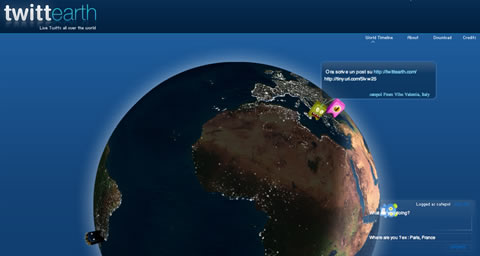