In January we commissioned Ilya Birman, a Russian designer with passion for typography, to adapt his typography keyboard layout (which has become a common typographer’s tool in Russia) to create a version for English-speaking designers, artists and, of course, typographers across the globe.

The main idea was to provide the web design community with a handy tool that would let designers enter characters that are usually unavailable on a keyboard easier and quicker. If you already tried to enter such words like naïve or résumé or used special symbols (trademark symbol ™) or pay attention to punctuation (en-dash, em-dash, hyphen etc.) and diacritics (accents, cedillas, etc.), you probably know what we mean.

We asked our Twitter followers to participate in our beta-testing. And after we received a lot of positive feedback, we implemented some of your suggestions in the final version.

In this post we release the Typography Keyboard Layout

– a simple, yet useful tool that lets you enter characters that are usually unavailable on a keyboard with ease. Hopefully it will help you to achieve better typography in your designs.

Good designers, undoubtedly, know that quotation marks look like “this” and not like “this.” The latter are typewriter legacy and today are to be used solely in programming. Good designers also know, that dash is not the same as hyphen. The most common use for hyphens in English is (surprisingly enough) hyphenation; dashes are used in ranges (2006–2009) or — and this is an example — as an alternative to parentheses. Good designers never use letter ‘x’ instead of multiplication sign in 1920×1440, and they never put © instead of © under their work. Oh, and they also do good designs. So, now life is going to be a little bit easier. No more will you need to open Character Palette or try to recover that Alt+0163 combination from your memory. 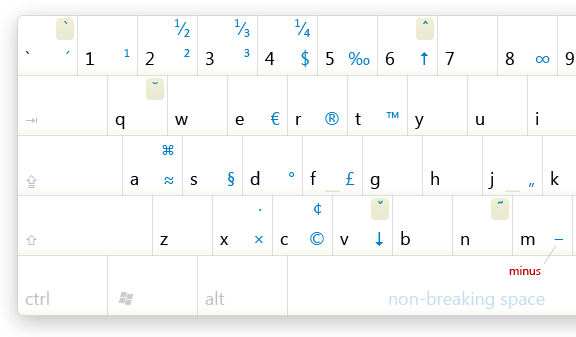 This thing is a regular keyboard layout, except that with Alt key on Mac or Alt Gr key on Windows it lets you type all these nice characters seamlessly. 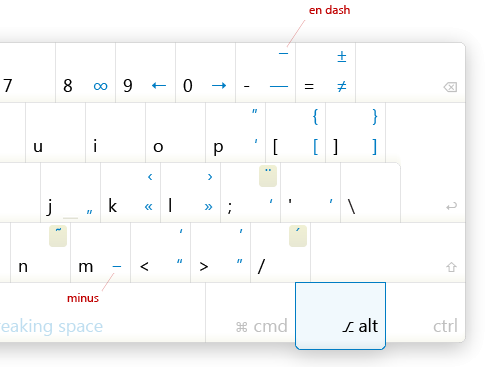 The layout also supports many kinds of diacritics, so you can type words like naïve or café and have fun. On the picture above (see full image for Mac or full image for Windows) the diacritical keys are printed on a beige background, e.g. acute is on / and diaeresis is on : .

. The best way to understand how it works is to play with it. But please note that many applications do not support combining diacritics, so whether you can use them or not is more or less question of your luck :-)

Get it for free!