Louis Lazaris is a freelance web developer and author based in Toronto, Canada. He blogs about front-end code on Impressive Webs and curates Web Tools Weekly, a … More about Louis Lazaris …

Without the CSS float property, table-less layouts would be, at worst, impossible, and, at best, unmaintainable. Floats will continue to be prominent in CSS layouts, even as CSS3 begins to gain prominence.

Years ago, when developers first started to make the transition to HTML layouts without tables, one CSS property that suddenly took on a very important role was the float property. The reason that the float property became so common was that, by default, block-level elements will not line up beside one another in a column-based format. Since columns are necessary in virtually every CSS layout, this property started to get used — and even overused — prolifically.

What Is A CSS Float Property?

The CSS float property allows a developer to incorporate table-like columns in an HTML layout without the use of tables.

If it were not for the CSS float property, CSS layouts would not be possible except using absolute and relative positioning — which would be messy and would make the layout unmaintainable.

In this article, we'll discuss exactly what the float property is and how it affects elements in particular contexts. We'll also take a look at some of the differences that can occur in connection with this property in the most commonly-used browsers. Finally, we'll showcase a few practical uses for the CSS float property. This should provide a well-rounded and thorough discussion of this property and its impact on CSS development.

The purpose of the CSS float property is, generally speaking, to push a block-level element to the left or right, taking it out of the flow in relation to other block elements. This allows naturally-flowing content to wrap around the floated element. This concept is similar to what you see every day in print literature, where photos and other graphic elements are aligned to one side while other content (usually text) flows naturally around the left- or right-aligned element.

The photo above shows the "Readers' sites" section of late , which displayd 3 readers' photos each aligned left in their respective columns with text wrapping around the aligned images. That is the basic idea behind the float property in CSS layouts, and demonstrates one of the ways it has been used in table-less design. The effectiveness of using floats in multi-columned layouts was explained by Douglas Bowman in 2004 in his classic presentation No More Tables:

Bowman explained the principles behind table-less design, using Microsoft's old site as a case study. Floats were used prominently in his mock overhaul of the Microsoft layout.

The float CSS property can accept one of 4 values: left, right, none, and inherit. It is declared as shown in the code below.

The most commonly-used values are left and right. A value of none is the default, or initial float value for any element in an HTML page. The value inherit, which can be applied to nearly any CSS property, does not work in Internet Explorer versions up to and including 7.

The float property does not require the application of any other property on a CSS element for float to function correctly, however, float will work more effectively under specific circumstances.

Generally, a floated element should have an explicitly set width (unless it is a replaced element, like an image). This ensures that the float behaves as expected and helps to avoid issues in certain browsers.

Following is a list of exact behaviours of floated elements according to CSS2 Specifications:

One of the most common uses for the float property is to float an image with text wrapping it. Here is an example: 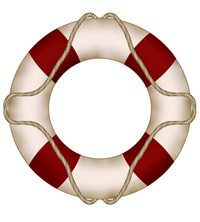 The CSS applied to the image in the box above is as follows:

The only property required to make this effect work is the float property. The other properties (margin and border) are there for aesthetic reasons. The other elements inside the box (the <p> tags with text inside them) do not need any styles applied to them.

This box is floated left

This <p> element has a different background color to show that it spans the width of its parent, ignoring the floated element. This inline text, however, wraps around the floated box.

Layout issues with floats are commonly fixed using the CSS clear property, which lets you “clear” floated elements from the left or right side, or both sides, of an element.

Let’s take a look at an example that commonly occurs — a footer wrapping to the right side of a 2-column layout:

If you view this page in IE6 or IE7, you won’t see any problems. The left and right columns are in place, and the footer is nicely tucked underneath. But in Firefox, Opera, Safari, and Chrome, you’ll see the footer jump up beside the left column. This is caused by the float applied to the columns. This is the correct behaviour, even though it is a more problematic one. To resolve this issue, we use the aforementioned clear property, applied to the footer:

The result is shown below:

One of the most common symptoms of float-heavy layouts is the “collapsing parent”. This is demonstrated in the example below:

Notice that the bottom of the floated image appears outside its parent. The parent does not fully expand to hold the floated image. This is caused by what we discussed earlier: the floated element is out of the flow in relation to other block elements, so all block elements will render as if the floated element is not even there. This is not a CSS bug; it’s in line with CSS specifications. All browsers render the same in this example. It should be pointed out that, in this example, adding a width to the container prevents the issue from occurring in IE, so this would normally be something you would have to resolve in Firefox, Opera, Safari, or Chrome.

The easiest way to fix this problem is to float the containing parent element:

Now the container expands to fit all the child elements. But unfortunately this fix will only work in a limited number of circumstances, since floating the parent may have undesirable effects on your layout.

This is an outdated method, but is an easy option. Simply add an extra element at the bottom of the container and “clear” it. Here’s how the HTML would look after this method is implemented:

And the resulting CSS applied to the new element:

You could also do this by means of a <br /> tag with an inline style. In any case, you will have the desired result: the parent container will expand to enclose all of its children. But this method is not recommended since it adds nonsemantic code to your markup.

Solution 3: The :after Pseudo-Element

The :after pseudo-element adds an element to the rendered HTML page. This method has been used quite extensively to resolve float-clearing issues. Here is how the CSS looks:

The CSS class “clearfix” is applied to any container that has floating children and does not expand to enclose them.

But this method does not work in Internet Explorer up to version 7, so an IE-only style needs to be set with one of the following rules:

Depending on the type of issue you’re dealing with, one of the above two solutions will resolve the issue in Internet Explorer. It should be noted that the zoom property is a non-standard Microsoft proprietary property, and will cause your CSS to become invalid.

So, because the :after pseudo-element solution does not work in IE6/7, is a little bit bloated code-wise, and requires additional invalid IE-only styles, this solution is not the best method, but is probably the best we’ve considered so far.

By far the best, and easiest solution to resolve the collapsing parent issue is to add overflow: hidden or overflow: auto to the parent element. It’s clean, easy to maintain, works in almost all browsers, and does not add extra markup.

In IE6, the height property is incorrectly treated as min-height, so this forces the container to enclose its children. The overflow property is then set back to “visible”, to ensure the content is not hidden or scrolled.

The only drawback to using the overflow method (in any browser) is the possibility that the containing element will have scrollbars or hide content. If there are any elements with negative margins or absolute positioning inside the parent, they will be obscured if they go beyond the parent’s borders, so this method should be used carefully. It should also be noted that if the containing element has to have a specified height, or min-height, then you would definitely not be able to use the overflow method.

So, there really is no simple, cross-browser solution to the collapsing parent issue. But almost any float clearing issue can be resolved with one of the above methods.

Over the years, there have been numerous articles published online that discuss common bugs in connection with floats in CSS layouts. All of these, not surprisingly, deal with problems specific to Internet Explorer. Below, you’ll find a list of links to a number of articles that discuss float-related issues in-depth:

Changing the Float Property with JavaScript

To change a CSS value in JavaScript, you would access the style object, converting the intended CSS property to “camel case”. For example, the CSS property “margin-left” becomes marginLeft; the property background-color becomes backgroundColor, and so on. But with the float property, it’s different, because float is already a reserved word in JavaScript. So, the following would be incorrect:

Instead, you would use one of the following:

Floats can be used to resolve a number of design challenges in CSS layouts. Some examples are discussed here.

Roger Johansson of 456 Berea Street outlines an 8-step tutorial to create a simple, cross-browser, 2-column, horizontally centered layout. The float property is integral to the chemistry of this layout.

“The layout consists of a header, a horizontal navigation bar, a main content column, a sidebar, and a footer. It is also horizontally centered in the browser window. A pretty basic layout, and not at all difficult to create with CSS once you know how to deal with the inevitable Internet Explorer bugs.”