Aquil Akhter is a web graphic designer and has been working in this field for 8 years. He also runs the blog webdesigncore.com, which focuses on free web … More about Aquil ↬

In the past, we’ve published a collection of Beautiful Photoshop Illustrations By Artists Around The World, and this is the latest post that will showcase the power of Adobe Illustrator. We present here hundreds of brilliant illustrations by artists from around the world that will surely mesmerize you and stir your imagination. Have a look, and feel the power of Illustrator!

We recognize that there are many more highly-talented illustrators that may not be mentioned here. We can't cover them all, but with your help we can try to showcase them in future posts. Please feel free to comment on this article and mention the name of your favorite artist.

Tom Whalen lives in McAdoo, a town in northeastern Pennsylvania, USA. He is a gifted and zealous designer come illustrator and he has skillfully amalgamated his passion in his idiosyncratically-designed posters.

Raiders of the lost ark poster

Christopher Lee is a multi-disciplinary designer and illustrator of sorts, born in Sacramento, California. He is a graduate from Sacramento State University and his formal education is in graphic design. His entire life, however, has revolved around drawing since he was old enough to hold a pencil.

The Birdman from Gargantua

Julian Dorado is an Argentina based illustrator and graphic designer who creates unique characters, cute animals, wild monsters, and various other font-inspired characters.

Chris Leavens was born and raised in Pennsylvania. He breezed through school and spent a good deal of time doodling, drawing robots, spaceships, and bizarre creatures. Currently, Chris is focusing on creating vector art using Adobe Illustrator. He produces most of his artwork — from start to finish — entirely in Illustrator, including textural elements. His work incorporates absurdity, anthropomorphisms, and a healthy dose of humor.

At the Break of Day

Advice from a Caterpillar

Zutto is a Russian-based digital illustrator, artist and character designer, with a very unique style. Her illustrations are dreamy and full of vibrant colors and fantasy characters.

Hey, don’t be so evil

Matthew Skiff is a vector illustrator living in Colorado. He is a well-known and trained graphic designer who has the ability to combine his graphic and illustration skills to create wonderful artwork. He makes illustrations for bands and creates professional t-shirt designs.

I Wrestled A Bear Once

Yiying Lu is one of the most promising designers of Sydney, Australia. She was born in Shanghai, China, and is a confident artist with many attractive designs and illustrations in her portfolio. She runs her own design studio & teaches design at the University of Technology, Sydney. Her dream job is to furnish visual refreshment to the current Google logo.

Yukio Miyamoto has been using and abusing Adobe Illustrator since the beginning of time (well, since the late ‘80s at least). His artwork is showcased and sampled in a number of design books and he has trained thousands of people in all areas of graphics for both Mac and Windows. You won’t believe your eyes when you see Yukio’s work.

Nick La is a freelance illustrator and web designer from Toronto. He is a well-known designer who has founded a number of projects including N.Design Studio, the popular blog Web Designer Wall, Design Jobs on the Wall, and Best Web Gallery. He has recently launched a new website called IconDock that’s completely dedicated to icons.

Helen Huang is an illustrator born and raised in China and currently living in Los Angeles. She has a passion for illustration and is currently working as a full-time designer for an interactive ad agency.

Micheal Heald is a passionate designer and diverse creative professional from the UK. His true passion and innovative outlet is his award-winning design studio Fully Illustrated where he offers creative services that include designing, branding, illustration, and 3-D motion graphics.

Susanne Paschke is a German freelance designer and illustrator. Her passion is to accept the challenge of making something emotional out of digital vectors. She uses path tools and simple color selections to create photo-realistic illustrations.

Jonathan Ball is an illustrator and designer from Cardiff, UK who has immersed himself in a number of creative fields. He is well-known for creating idiosyncratic and skillful artwork that’s regularly infused with original characters.

Ryan Putnam is an illustrative designer living in Colorado Springs, Colorado. He runs Vectips, a blog dedicated to vector illustrations and he does client work under Rype Arts. He is an outstanding illustrator who has been drawing and doodling his whole life and received a graduation degree in fine arts with a concentration on graphic design from Colorado State University.

Rubens Cantuni is an Italian designer with a degree in industrial design currently working as an art director and supplementing his income with freelance illustration. He is truly passionate about his creative work and wants to make a full-time living from illustration in the future.

Economy is a robbery

Sascha Preuß is a German Illustrator who is working as a freelance Illustrator under the name Bubblefriends. He is known for creating cute characters and colorful vector illustrations.

Halim Ghodbane is an amazing illustrator based in Algeria. You won’t believe your eyes when you see his work.

Rod Hunt is a London-based Illustrator and artist who has built a reputation for retro-tinged Illustrations and detailed character-filled landscapes for UK and international clients spanning publishing, design, advertising, and new media, and covering everything from book covers to advertising campaigns, theme park maps, and even the odd large-scale installation too! Rod is also the artist behind the best selling Top Gear book “Where’s Stig?” published by BBC Books.

This kind of artwork is often created using Illustrator’s Gradient Mesh Tool, though not always. You’ll see that some of the artists create artwork with a fantastic level of detail, using many flat shapes. Illustrator is the most popular program for creating Hyperreal Vector art. Artists also use Flash and other vector programs as well.

Cristiano Siqueira Chistiano is an accomplished illustrator from Brazil. He has multiple vector stylistic influences. He has some works in vexel styles, cartoon styles, realistic styles, hyperrealistic styles, and various mixtures of these. The work depicted below has a great deal of realism, but also brings in a feeling of fantasy. Here is a link to an Interview with Cristiano Siqueira, in case you want to learn more about the artist. 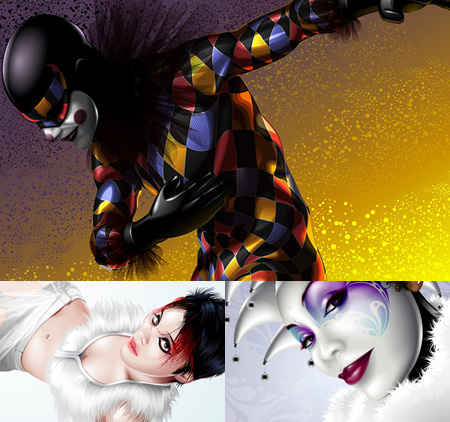 Giulia Balladore This illustrator is from Italy. Here is a link to an Interview with Giulia Balladore, in case you want to learn more about the artist. In this interview the artist’s style is described, “my work has a huge hyper-realistic and fashion influence; chiefly I like to focus the human nature in each of my illustrations.” 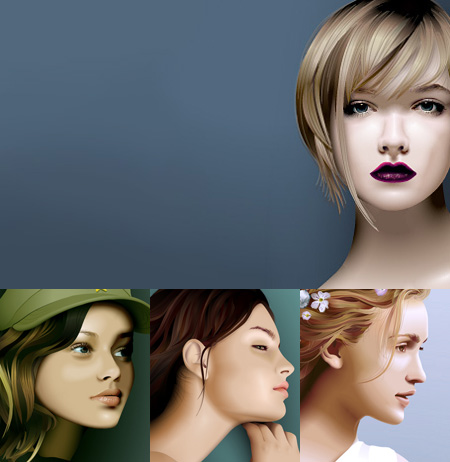 Oleg Rogoznev This is a Russian artist with a really impressive craft when it comes to design of realistic vector images. His work takes on hyperreal qualities by focusing on extreme detail (see “The Flower” below, at the left hand side). In the “Still life” (below right) he uses subjective lighting. In the “Large eye” he captures realistic detail, while allowing some of hair and skin elements to show through as simplified vectors. You can visit his portfolio for further works. 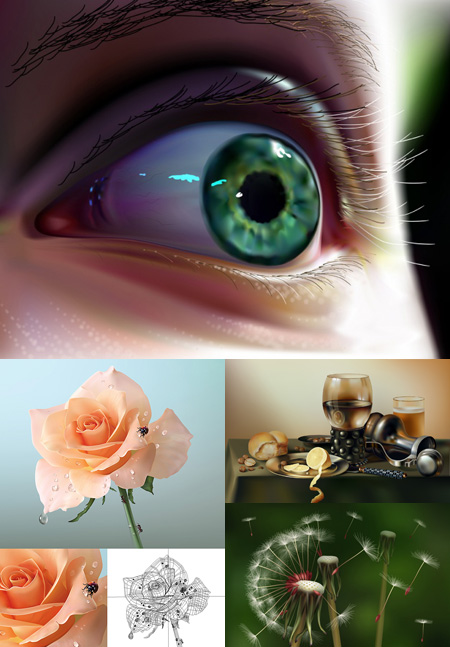 Nuria Herrero This artist currently resides in Spain. She has a portfolio filled mostly with cartoon style realism. Though she also works in Hyperreal style on occasion, as can be seen from the selection of her work below. 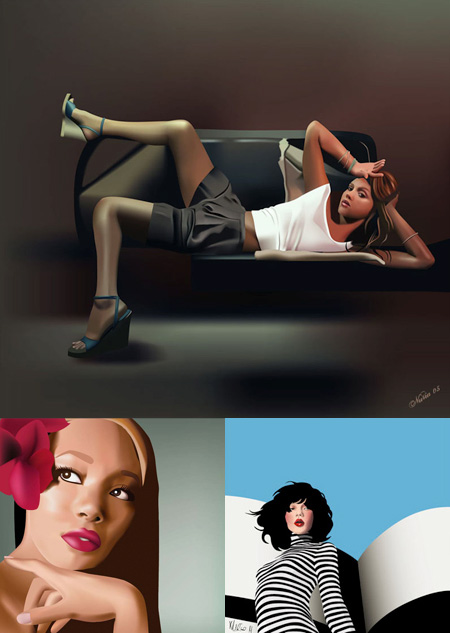 Catherine Preston This artist is from the United Kingdom. She has a small selection of high quality vector portraiture. The top illustration is exemplary for her work. In the bottom illustration notice the choice of details in the image. Leaving out some of the texture in the iris of the eye gives a little bit of flatness to such a realistic image. Apparently, such kinds of artistic choices lead to stylistic effects. 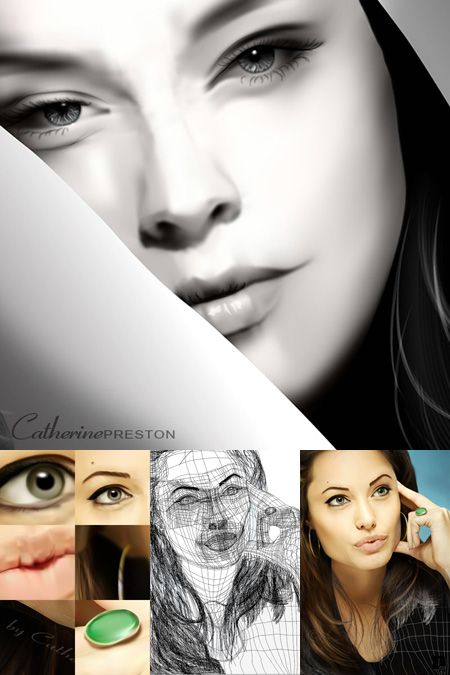 Chris Nielsen Chris is an illustrator from California, USA. He doesn’t use the Gradient Mesh tool. He prefers to create all that exquisite detail with a multitude of flat abstract vector shapes. He defines his style as “Stylized Realism.” In the motorcycle portraits below, he allows some unfilled vector lines to show through the design. They coexist with the shiny chrome details. 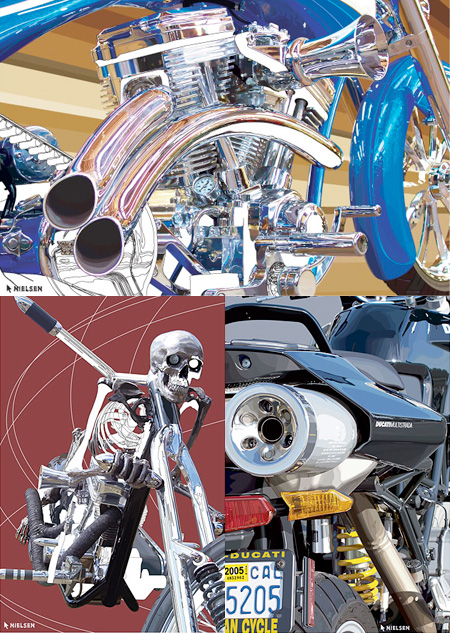 Joseph Ryan Nasipak Joseph is from Ohio, USA. He has used the Gradient Mesh Tool in some illustrations, but also uses blurs to good effect. The artist has the following to say about the top image, “This image was done with solid color fills, gradient fills, gausian blurs and opacity tints. No mesh.” 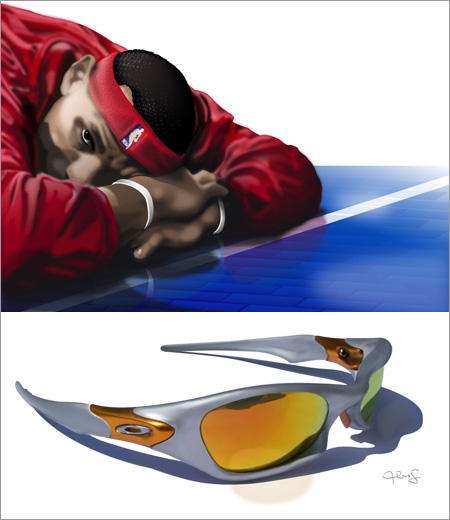 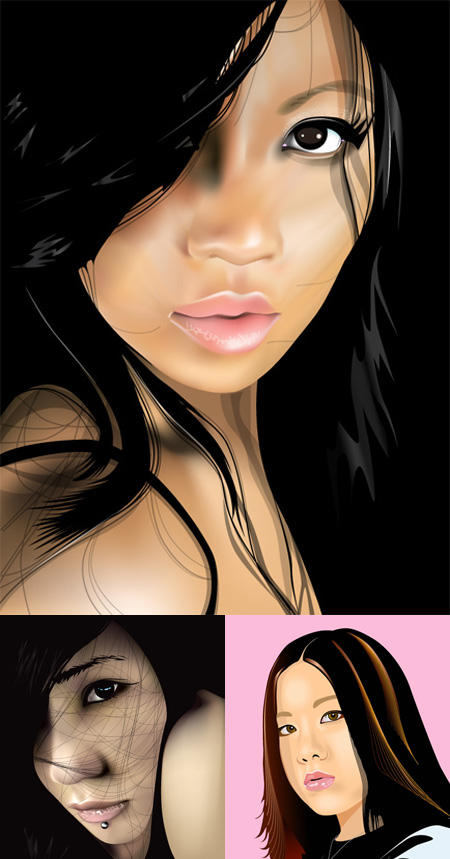 Patrick Kerby This artist is from Ontario, Canada. He has a large photography collection. Vector illustration is more of a hobby for him. He recreated Spiderman from a poster in the large image below using Gradient Meshes in Illustrator. 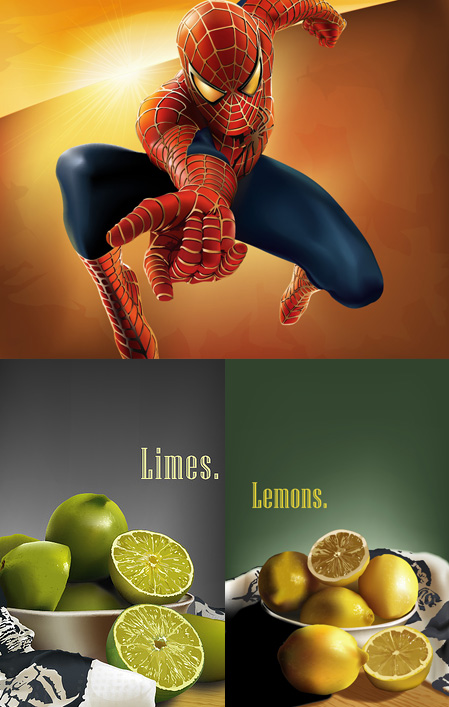 Mark Westberg This artist is from Minnesota, USA. He has an interest in motorcycles, airplanes, and nudes. They are all created in vector, but have an airbrushed painted quality applied to them. Especially the airplane images below. They have a hyperreal detail, while using depth of field, and blur techniques to simulate motion. Look at the blur on the propeller at the bottom right. The artist also creates atmospheric lighting with the sunset backgrounds. The motorcycle is made from flat shapes. If you look at the left rim you can see where some noticeable shapes were left. 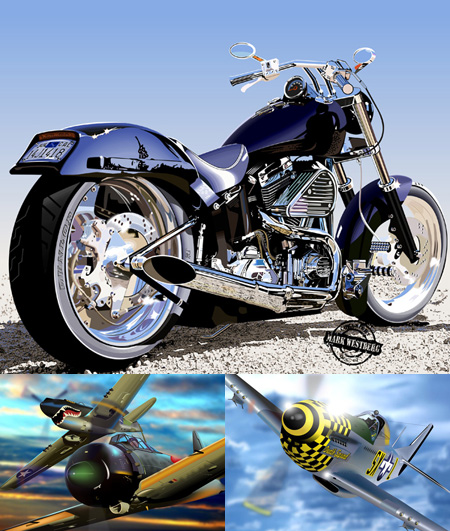 Jussta This artist is from Poland. Her portfolio displays a range of work including Vexel stylization, Vector Cartoon, and Hyperreal. She mixes these styles in her work. Each image has areas of different stylization. In the large image, you can see how the flat vector jacket contrasts the realism of the woman depicted in the image. 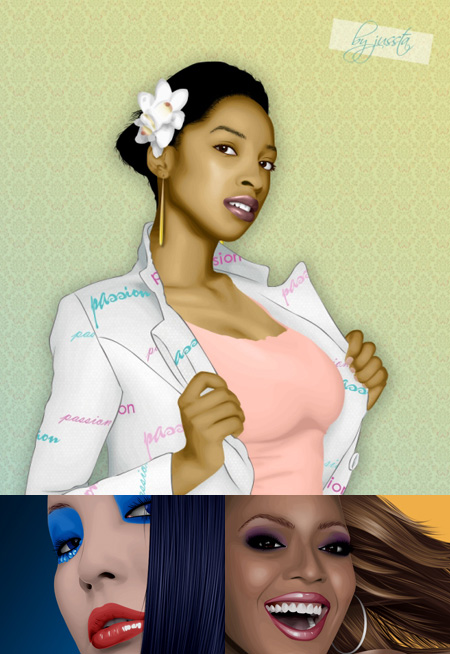 Todd Mac This artist resides in Norway. He has a mixed style, which combines realism and flat vector graphics. The top image is titled Copertone Girl. The lighting and detail in this image have Hyperreal qualities. The face in the image is done with the Gradient Mesh Tool in Illustrator. Of course, the artist also mixes some flat vector graphics as well, like in the strands of hair and background. 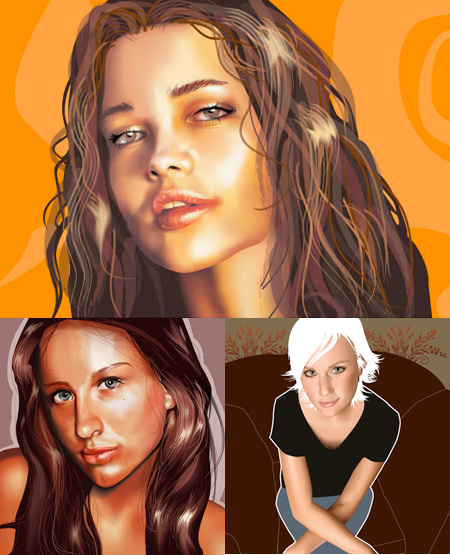 Hyperrealism is an art movement which requires the same level of technical ability as photorealistic illustration. While Hyperrealism brings a similar level of skill to images, this style allows the artist to creatively interpret an image. In Hyperrealism artists utilize ethereal lighting effects, depth of field techniques, and camera style perspective to depict the images. They create images that are imaginatively realistic.

Often artists that work in Hyperrealism have other interests as well. These vary by subject matter and style. Some of the artists listed below are interested in Vexel styles, Digitalization, Classic Airbrush Painting, and have been influenced by a myriad of other styles. We’ve included work that ranges from strong Hyperrealism to work that is more a stylization of reality.