App Store is a competitive environment. Against more than 140,000 apps, all screaming for attention, how do you make sure your app gets its time in the spotlight? What does it take to get good media coverage? How do you get people to talk about your app—and, ideally, how do you get them to buy it and show it to their friends?

App Store is a competitive environment. Against more than 140,000 apps, all screaming for attention, how do you make sure your app gets its time in the spotlight? What does it take to get good media coverage? How do you get people to talk about your app—and, ideally, how do you get them to buy it and show it to their friends? 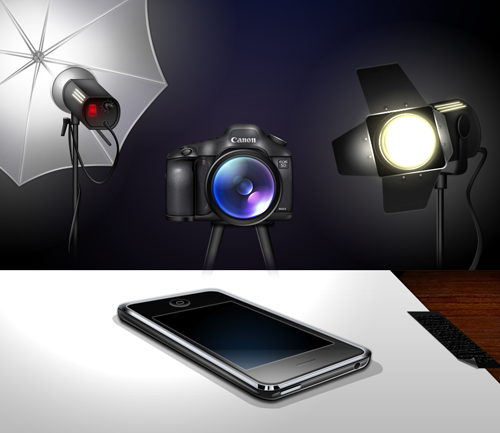 Following the simple rules laid out below, you will increase your chances in the battle for fame and glory. These tips might seem rudimentary or in-your-face obvious, but they are so often neglected in the heat of the moment.

One of the easiest ways to stand out in the App Store is to create an app that is unique. Sure, that makes sense. Yet still thousands and thousands of apps are uninspired, shovelled out by tired developers looking for a quick buck.

If you want to stick it to the man, make sure that you are either:

If you’re just improving something that’s already available, your battle to market it will be uphill.

At this point in the history of the App Store, very few apps create new categories. So unless you’re sitting on a revolutionary new idea, focus your attention on a unique spin of an existing category. So many things can be re-imagined with little effort. Look at your competitors and flick on your child-like consumer filter. What cool feature for this category is missing? How can you take advantage of the iPhone’s interface, accelerometer, GPS or multi-touch functionality to create a package that delivers a unique experience in this category?

A unique feature will make your app stand a head taller in the crowd and raise eyebrows. And that’s exactly the effect you want if you intend to sell apps in the App Store.

Getting people to talk about your app is imperative for success. The more people talk, the more exposure your app will get, which will hopefully translate into sales. If your app is unique, you’re halfway there—people will talk about it just because of its uniqueness. But how do you encourage people to start up conversations about your product?

I’m sure you’ve pitched your app to at least a dozen co-workers and puzzled family members. You know the ins and outs of your elevator speech, the highs and lows, the big sells of your product and the hard-to-understand parts. If you want your app to succeed, you will need to teach that pitch to the rest of the world.

Make the conversation about your app easy and engaging. Make it so that people want to tweet about it. Tweetability—if no one has yet, I’m trademarking that word—refers to how well a product or message would move on Twitter. The Twitter network, with its millions of users, has a particular personality and disposition. Despite the diversity of people using the service, talking about it like a homogenous mass still makes sense in many ways. Some of the most successful apps are easily shared through social media. Imagine the twittersphere chattering in chipmunk voices, “Hey, guys. Check this out!” Instantly gratifying app + high tweetability = free exposure.

Even if your app isn’t instantly gratifying or playfully humorous, you can still compose a tweet that is highly tweetable. Just think of what you would retweet yourself. How would you sell your app in 140 characters?

Social media and the blogosphere are not isolated from each other. Like ripples in a pond, the more people tweet about your app, the more likely you’ll hit a big blog.

Review blogs and tech websites are part of the App Store’s eco-system, and while the exact effect they have on sales is debatable, the traffic and buzz they generate are worth pursuing.

To get good media coverage, you need to think like the media. How good a story is your app? Obviously, the law of uniqueness makes a difference here, but your app should also be easy to write about. First, provide a free press package that anyone can download. Supply people with the material they need to talk about your app. Give them a high-res version of the icon, screenshots and press-related texts.

Don’t be stingy with the promo keys either—in fact, dispense them liberally. Promo keys are cheap marketing collateral and a way for you to put your app in the hands of peer leaders. Throw the keys at your favorite blog, and invite them to give some away for free in a raffle. If you can find a category-specific blog, you’ve got a direct line to your target customers. It’s a great way to reach a new audience and strengthen your relationships and reputation.

While they may not want to hear this, blogs are a bit like kids in a schoolyard. If you can get the cool kids to talk about you, chances are that other blogs will pick up the story and throw you on their front page. Getting on review and media websites is vital to your marketing success, because they are less transient than tweets. Reviews stay there and bring in traffic for months.

App sales thrive on hype. Learn to control the hype, and you will have mastered the product launch. Hype will always be partly out of your hands, but the rules mentioned above will help you put things in motion. But hype will amount to nothing if it’s for a poor product. While there is truth to the saying that there is no such thing as bad publicity, hype can backfire and harm your efforts to generate hype in future.

Start hyping early. If you know you have a unique product, let people in on the secret before the launch. Having an interesting “Coming soon” website can do this, by building a mailing list and getting Google juice for your domain.

Needles to say, your app should have its own website. To make any of the rules above work, you will need a point of reference, somewhere to send the masses. Make the website interesting; show the app in action, and think outside the box. Make the website an extension of your app, and you will have yet another great tool in your marketing toolbox.

When you launch, make it big. Send out the triumphant newsletter, and hit all social media. Have you or your team write up blog posts, and pull every lever and handle in your network. Hype is all about critical mass: the first wave you set in motion will give you instant feedback on how to adjust your hype machine.

Maintaining hype is all about introducing new venues in which to exhibit your app. Get a steady stream of review websites to cover your app. Give away promo keys on Twitter, and serve new content on your website. Obviously, if you can get into the “What’s hot” or “New and noteworthy” sections of the App Store, you’ve made it far.

In the end, hype is part luck and part skill. The best way to balance the two is to keep asking yourself whether you can do anything else to add value, mystery, polish or spin to your product. Rely on your own judgement: what would excite you about this app if it were made by another developer?

Example: Being Awesome In A Saturated Market

To illustrate the application of these rules, let’s take a play-by-play look at one successful app. For the sake of convenience, let’s just call it “Awesome app.” 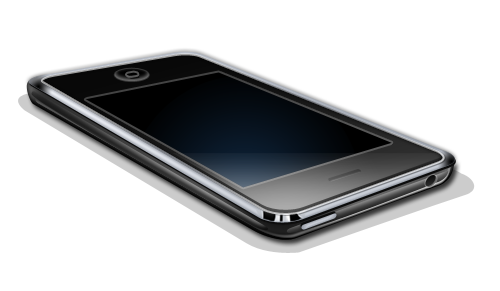 Awesome app is a weather-forecasting app. This is a classic scenario: a re-thinking of an established category. I can’t think of a more tired and saturated market than weather apps, making this an excellent example of being able to re-invent and compete if we have the right frame of mind.

The Awesome app reverse-engineers the trend of offering up increasingly detailed and advanced weather data. Instead, it trims down functionality and focuses on the very playful and human idea of exploring the weather visually, by swiping through a virtual forecast. It builds uniqueness right into the very concept and goes in the opposite direction of the market leaders.

Prior to launch, the website for Awesome app presents a “Coming soon” page that collects close to a thousand confirmed emails. A teaser video of the interface generates some buzz and earns the app a nomination in the App Star awards. The app launches at the end of December 2009. The release newsletter goes out; a more elaborate version of the website, with video and screenshots, goes up; and the developers make as much noise as they possibly can in their networks.

As soon as sales get a lift from the early launch hype, emails are sent out to various review websites offering promo keys. Reviews started flowing in, and chatter about the app is monitored on Twitter, where developers offer help and follow up on questions. A “Making the app” video is posted that gives existing customers something to enjoy (and that humanizes the team), highlighting user recommendations. 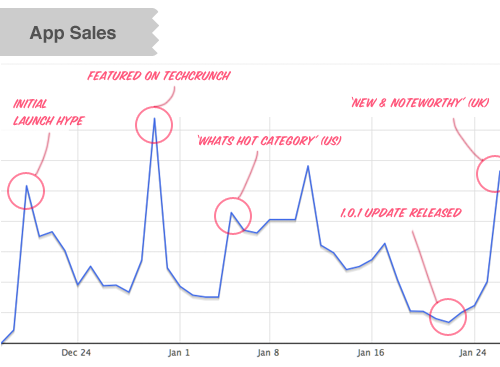 The website for Awesome app gets some wind of its own by being featured in various design blogs for its modern use of CSS animations, contributing hype that doesn’t have anything to do with the app itself.

Picked Up by Larger Websites

A week and a half after launch, larger websites such as TUAW started showing interest. And coverage peaks with a TechCrunch article, which ripples out to LifeHacker and other major websites. More than a month in and we’re still seeing continued interest in the app; it has gathered hundreds of five-star reviews in the App Store and has been featured in both “New and noteworthy” and “What’s hot.”

What worked for Awesome app was a combination of the marketing rules discussed above:

Not a single dime was spent on marketing it, yet the Awesome app reached tens of thousands of people. If you have a unique product and apply some of the ideas above, you too can secure free exposure for your beloved app. It’s a rather democratic and honest process because you are required to re-invent apps by adding unique features. Marketing then becomes all about making it easier and more interesting for people to talk about and share your creation.

As with most other things in life, there’s no surefire way to create a successful app. But keeping in mind some of the things we’ve talked about here—both at the conception and the execution stage—will put you in a position to build awareness of your application much more easily.