Quick summary ↬ There are thousands of free icon sets out there, and every other day we see new sets being released by the design community. In fact, Smashing Magazine has been releasing icon sets for years now, too. But today’s release is a bit different. [Links checked & repaired March/06/2017]

Over the last 1.5 years, Oliver Pitsch was designing and preparing an “ultimate web designer icon set” exclusively for Smashing Magazine and its readers. Today we release the third, final version of the set, an extensive pack with over 750 free icons (48×48px) for designers and Web developers. The .PSD-sources are available for free download as well. 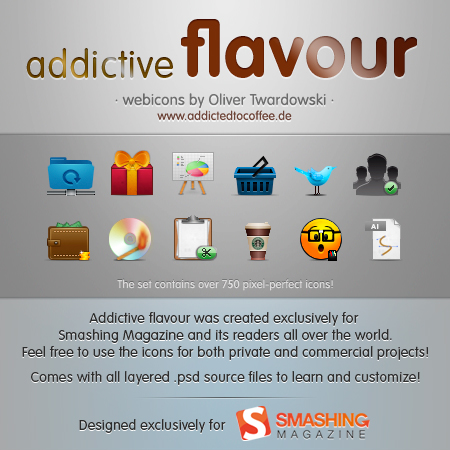 You can use the set for all of your projects for free and without any restrictions. You can freely use it for both your private and commercial projects, including software, online services, templates and themes. The set may not be resold, sublicensed, rented, transferred or otherwise made available for use. Please link to this article if you would like to spread the word.

As always, here are some insights from the designer himself:

“In January 2009 I released my first pixel-based iconset ‘Flavour’ right here on the Smashing Magazine. A couple of months later, in May 2009, I extended that set and released ‘Flavour Extended’. Now, over one year later it’s time to finish this set. ‘Addictive Flavour’ will be the last part of the Flavour series. (At least for now I think it will be ^_^ ).

In my releases I asked you for your feedback on the iconset and that feedback was overwhelming. I received hundreds of e-mails and read even more comments here and on Twitter. With ‘Addictive Flavour’ I hope to give you the icon set that you wanted and that you need for your web development projects. Though, if there is a special icon missing in the set that you need for your project or site, please feel free to contact me on Twitter @ot or via e-mail (icons [at] addictedotocoffee dot de) and we’ll see what we can do for you!

I want to thank all of you for your great support with this huge icon set. Especially I want to thank Magda, Lars, Martin LeBlanc, Bastian Allgeier, the team at Smashing Magazine and all of the beta-viewers who did a fantastic job on reviewing my work and giving me feedback, love and inspiration!

Please stay tuned for more of my releases here in Smashing Magazine or via my Twitter stream.

Thank you very much, Oliver! We appreciate your efforts.