With all of the buzz going on in our Web community about HTML5 and Flash, I’ve decided to dive into the fray and offer my thoughts as a 10-year veteran of both Web design and Flash development. Let me preface by saying that this article is opinion-based, and that information is certainly out there that I am not aware of, and that none of us truly knows what the future holds.

Use Of Flash Till Now

When Flash broke on the scene, it was a fairly revolutionary tool… and much simpler to use than it is today. I first started using it in 1999, when it was being produced by Macromedia. The current version then was 4. The simple benefit was that it allowed the average computer user to design graphics and create simple user interactions with almost no skill: quite a feat in the messy and over-complicated world of Netscape and IE4.

You may also be interested in the following related posts:+

People didn’t take long to start using Flash as an engine to create full and complete websites, especially as the versions continued their march upward and ActionScript gained footing. Quite simply, it sped up development time and wow’ed all users with its animations—a far cry from the static-text Geocities websites around them.

But Flash started to be overused soon after. One can compare it to HTML tables, a framework that revolutionized the industry for a time, became overused and then receded to its proper role (which in this case was to structure data points rather than website columns).

Why They Don’t Have to Fight

I’ve read a lot of blog posts lately about HTML5 taking on Flash like a prize fighter and kicking it off the scene in some epic battle of Web standards and pragmatism. But this is a false scenario: HTML5 and Flash are not meant to be fighting in the same ring, or to be fighting at all. Each has its proper place on the Web and in the graphic community.

Interestingly enough, Flash’s place is not entirely on the Web at all, and certainly not to take over full website designs (or those dreaded Flash intros either). While bits of Flash will continue to be used in Web design for advertising and gaming, it will truly shine in two primary areas.

The first area is the corporate setting. I work part-time as a Web developer on the multimedia team of a major international telecommunications company. The majority of the team consists of Flash developers, and there is a huge demand for more of them. So, while Flash may be shrinking in the Web industry, it is booming at the corporate level through rich media, training and learning solutions, Intranet applications and the like.

While Flash may be simplistic and annoying for a website, its capabilities for database interaction, PHP integration, XML sourcing, external ActionScript 3, extensible plug-ins and import and export functionality make it an extremely robust tool that far outweighs the competition for certain uses. Flash has a profitable future in corporate settings.

The second area is still budding and turbulent: mobile platforms. Web content aside, if Flash could be used to produce applications and rich interaction on a variety of mobile platforms, it would empower designers and developers everywhere to contribute to a booming mobile industry (and give us the opportunity to make a sweet profit while we’re at it). 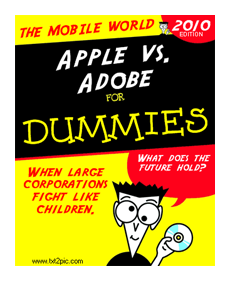 Why would Flash do so well in the mobile space compared to Web-based tools and frameworks? First of all, because Flash is a powerful development tool, beyond its graphic and animation capabilities. ActionScript 3 has brought serious improvements to the overall structure and functionality of applications, allowing developers to create powerful apps.

Secondly, Flash being used across multiple platforms brings a much higher probability of consistency and compatibility. Even if comprehensive Web standards were supported across all mobile devices, there is no guarantee that we wouldn’t run into the same cross-browser headaches on the variety of mobile browsers. If Flash were supported on all mobile devices, I could be reasonably certain that my Flash module would run smoothly on each one.

It’s like my parents fighting. I love Adobe. I love Apple. This really sucks.

The Adobe and Apple disagreement may be discouraging, but consider that Android is releasing a Flash-enabled framework, and Adobe is releasing Flash Player 10.1 for smartphones, and Research in Motion has joined Adobe’s Open Screen Project, essentially committing the BlackBerry to Flash in the near future.

Flash should never have been used to the extent that it was purely for Web design. But it has capabilities beneath the hood that make it an extremely valuable resource for certain uses, particularly in the mobile space.

HTML5’s place, on the other hand, is entirely on the Web. And this is an outstanding development. I remember switching from table-based designs to CSS, a liberating move that gave Web designers a freedom that only we could truly appreciate. Moving forward with standards-based browsers and rich functionality via CSS3 and HTML5 will take our industry to new heights and lead to a flourishing of gorgeous websites and functionality that we’ve never before witnessed.

Plenty of articles and resources outline the capabilities and benefits of HTML5 (I won’t cover them here), but rest assured that it is the future, and a sweet future at that.

The Web In Two Years

Where will the chips fall when the Web design industry reaches its next stage? I may be idealistic, but I would like to see (and I think we will see) the following:

Flash has been misused and overused for the past eight years, spreading its tentacles too far into the fabric of Web design. But rather than getting beaten out of the picture by these practical new Web frameworks, Flash will retreat to its proper place: those niche areas where it belongs and can truly excel. The first niche is multimedia and learning solutions for the corporate space. Only time will tell if Flash finds its second niche on mobile platforms.