Quick summary ↬ The old adage, “a picture speaks a thousand words” captures what user interface prototyping is all about: using visuals to describe thousands of words’ worth of design and development specifications that detail how a system should behave and look. In an iterative approach to user interface design, rapid prototyping is the process of quickly mocking up the future state of a system, be it a website or application, and validating it with a broader team of users, stakeholders, developers and designers. Doing this rapidly and iteratively generates feedback early and often in the process, improving the final design and reducing the need for changes during development.

The old adage, “a picture speaks a thousand words” captures what user interface prototyping is all about: using visuals to describe thousands of words’ worth of design and development specifications that detail how a system should behave and look. In an iterative approach to user interface design, rapid prototyping is the process of quickly mocking up the future state of a system, be it a website or application, and validating it with a broader team of users, stakeholders, developers and designers.

Doing this rapidly and iteratively generates feedback early and often in the process, improving the final design and reducing the need for changes during development.

Prototypes range from rough paper sketches to interactive simulations that look and function like the final product. The keys to successful rapid prototyping are revising quickly based on feedback and using the appropriate prototyping approach. Rapid prototyping helps teams experiment with multiple approaches and ideas, it facilitates discussion through visuals instead of words, it ensures that everyone shares a common understanding, and it reduces risk and avoids missed requirements, leading to a better design faster. 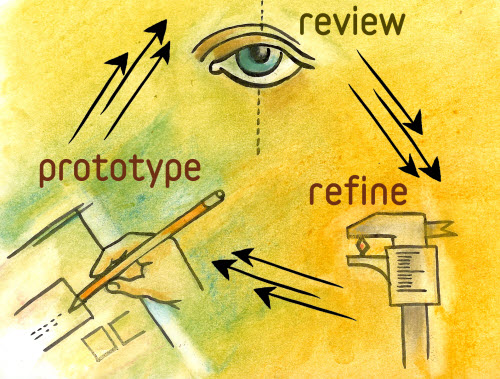 The prototype usually starts small, with a few key areas mocked up, and grows in breadth and depth over multiple iterations as required areas are built out, until the prototype is finalized and handed off for development of the final product. The rapidness of the process is most evident in the iterations, which range from real-time changes to iteration cycles of a few days, depending on the scope of the prototype.

The word prototype often conjures images of a coded, fully functioning version of an application or interface. Rapid prototypes are not intended to evolve into fully functional solutions, but are meant to help users visualize and craft the user experience of the final product. With that in mind, when scoping a prototype, decide on a few key issues before beginning any prototyping work.

What Needs to Be Prototyped?

Good candidates for prototyping include complex interactions, new functionality and changes in workflow, technology or design. For example, prototyping search results is useful when you want to depart significantly from the standard search experience; say, to introduce faceted search or the ability to preview a document without leaving the search results.

How Much Should Be Prototyped?

After identifying the areas to be prototyped, weave them together into one or more scenarios: identify the coherent paths through the user experience that the prototype simulates. For a website that sells shoes, one scenario could be “Boring Joe” buying the exact same Nike running shoes that he bought six months ago, while another scenario could be “Exploring Sam” browsing through size 10s to find a pair of Oxfords and pair of loafers that interest him.

The entire prototype is usually not built in a single iteration but rather piece by piece. A good approach is to start prototyping broadly and widely and then dive deep into selected areas of the solution. For a website, this would mean building out the home page and landing pages for the main sections in the first iteration (sometimes referred to as a horizontal prototype) and then reviewing and revising that framework. Subsequent iterations could drill down into one or more sections of the website (a vertical prototype); for a media download website, this could be the steps a user would take to find a video and to download it, or how they would manage the media in their online library. 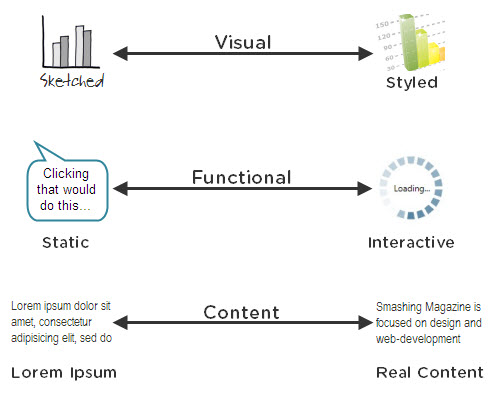 Fidelity refers to how closely a prototype resembles the final solution. There are multiple dimensions of fidelity, and prototypes can lie anywhere on the spectrum for each of these dimensions. Depending on the stage of the design process and the goals of the prototype, select the appropriate fidelity for each of the following:

The quickest way to start prototyping is also the easiest: putting pen(cil) to paper. Sketching on paper is a low-fidelity approach that anyone can do; no special tools or experience required. Most often used during the early stages of a design cycle, sketching is a quick way to create rough mock-ups of design approaches and concepts and to get feedback from users. Paper prototyping is ideal during brainstorming and conceptualization and can be done alone in a cubicle with a sketchbook or in a group with a flip chart (or whiteboard) and markers. 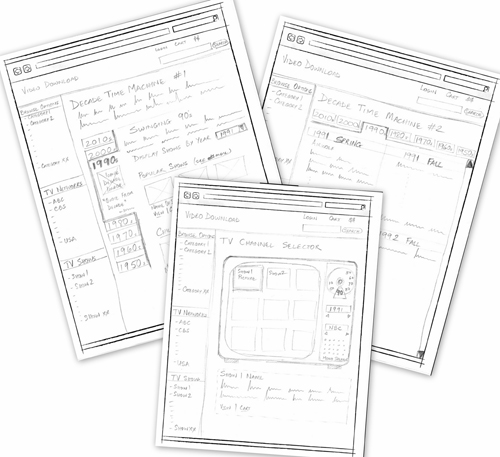 Lying at the low-fidelity end of the prototyping spectrum, paper prototypes are static and usually have low visual and content fidelity. This forces users to focus on how they will use the system instead of what it will look like, and it makes designers more open to changes based on user feedback.

Low-fidelity prototyping lends itself to rapid prototyping. It has no learning curve but lets you make changes easily and quickly.

As we start using computer-based tools such as Visio and Omnigraffle to prototype, the fidelity increases on most fronts, yielding medium-fidelity prototypes. Wireframes, task flows and scenarios that are created with these tools take more time and effort but look more formal and refined. While visual elements of branding, colors and style can be introduced, prototypers often stay away from them, focusing instead on demonstrating the behavior of the application. Interactivity can be simulated by linking pages or screens, but functional fidelity here is medium at best. These prototypes are best suited to determining whether user needs are met and whether the user experience is optimal. 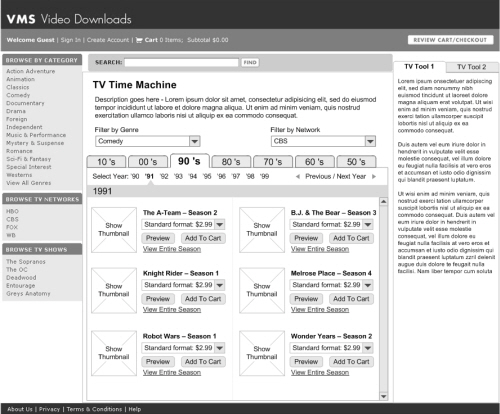 The speed of medium-fidelity prototyping is achieved with templates, stencils and reusable widgets and elements. It gets faster as you become more proficient with your tools of choice.

These prototypes are appropriate when high visual and functional fidelity is required; for example, when introducing a new technology (say, when moving from a mainframe application—yes, they still exist!—to a Web-based solution. Most of these prototypes cannot be converted to usable code, but they serve as an excellent reference for developers. These are also useful for conducting usability testing and training users. 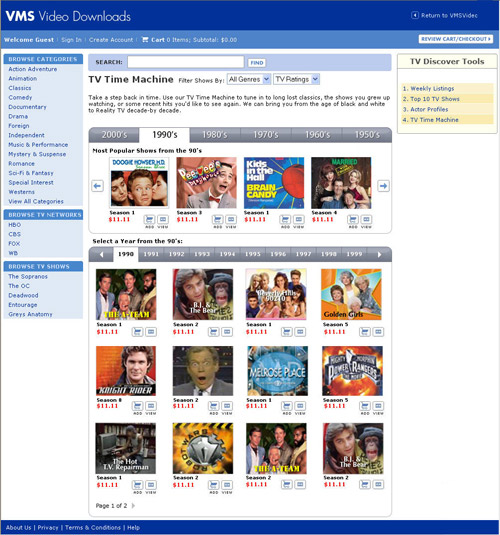 High-fidelity prototyping is relatively rapid, considering the level of interactivity and fidelity involved, and it can be accelerated by using drag-and-drop simulation tools. In addition, some of these tools facilitate the gathering of user feedback and documenting of requirements, further speeding up the design process. Even though you do not need to learn a new programming language, these tools do have a learning curve.

In choosing the prototype fidelity, there is no one correct approach. Most designs of new products are best started with sketches, then moving to either medium- or high-fidelity prototypes, depending on the complexity of the system and the requirements of the dimensions of fidelity.

In working with one particular client in the pharmaceutical industry, we went from whiteboards to interactive prototypes that had high functional and content fidelity but low visual fidelity. They cared less about the look and feel than about adhering to corporate guidelines.

For another client, this one in retail, our interactive prototype had to have high visual and functional fidelity. The content fidelity did not matter because they would be reusing content and were already familiar with it. To them, the look and feel and interactive experience mattered more because this was their first implementation of SharePoint, and they wanted to make the portal look “non-SharePointy”!

Depending on your approach, you have a wide variety of tools to choose from. Dan Harrelson has compiled a list of popular prototyping tools on the Adaptive Path blog.

Each tool has its own feature set and strengths. Based on your needs and the requirements of the projects you work on, evaluate which tool would be most appropriate. Here are some questions to consider when evaluating tools:

As you get started, here are a few points about effective rapid prototyping to keep in mind: