Adit is a web designer and developer who has deep interests in computer science, art, math and astrophysics, although he graduated as a Petroleum Engineer. He … More about Adit ↬

Information graphics (or infographics) are used to display information in ways that are more creative than plain old text. These days, they surround us in the media, published works, road signs and manuals. Lately, the Internet has been flooded with infographics on various topics, ranging from science and technology to society and culture. In this article, we’ll look at the process of designing an infographic about programming.

What the Infographic Shows

This infographic exhibits pioneers in the field of programming, along with the history and current statistics of various programming languages. Also included are some random facts and algorithm diagrams to make the infographic more visually appealing. Click on the image to enlarge.

All of the pioneers in this infographic have had a big impact on the field of programming. Still, this list is in no way comprehensive. Programming languages like C, C++ and Java have shaped the programming world, and so including their creators here was essential. The same goes for pioneers such as Ken Thompson, Richard Stallman and Linus Torvalds, who have each made significant contributions to the open-source world.

You might also notice that some important algorithms — such as dynamic programming, brute force and hash tables — are missing. The reason is that explaining these algorithms in a single diagram is difficult. Hence, they were replaced with ones like insertion sort and merge sort, which are relatively simpler to explain. Eight Queens and N-puzzle have often been used as illustrative problems for various programming techniques, and so they, too, are included here.

Infographics are visual representations of information, data and knowledge. So, layout, color and typography are critical to user comprehension. Let’s consider each of these in turn.

Given the available information, I decided to divide the infographic into three major sections:

The goal was to make the infographic simple yet beautiful. I came up with the following possible layouts to display the information: 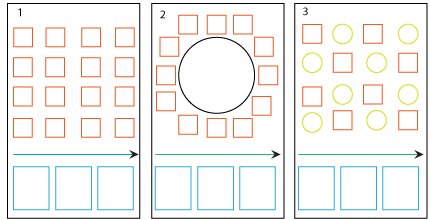 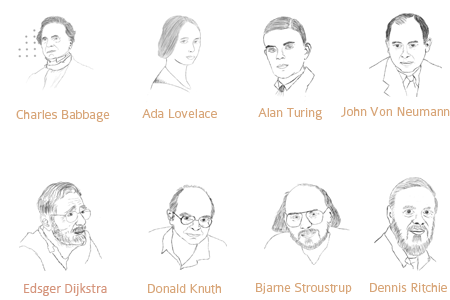 This first layout is simple but lacks the attractiveness of a good infographic. So, I decided to abandon it. 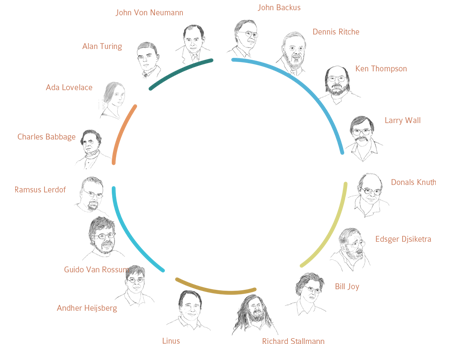 In the second layout, the illustrations are arranged in a circle. But including the relevant information for each illustration consistently would have been difficult. So, I abandoned it, too. 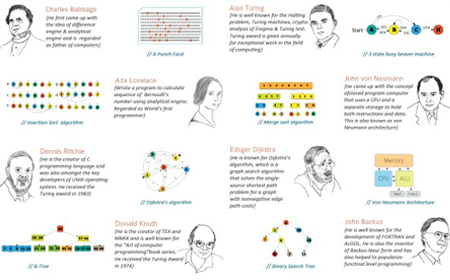 I decided on a layout that combines the sine wave with golden rectangles, two properties that I discuss in an earlier article. I put random facts and diagrams of algorithms in the remaining golden rectangles to make the infographic more attractive. 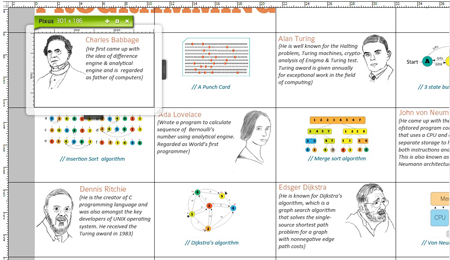 I chose a light shade of gold (#f9ebb3) for the background. Then, I applied a granular pattern to the background layer and scaled it down to 51%. I also reduced the opacity to about 52%. The illustrations now look good against this background. 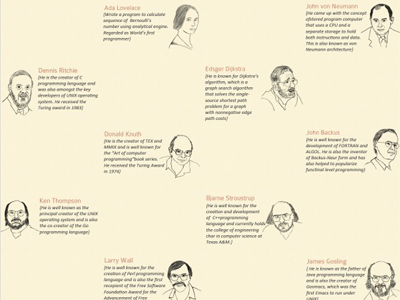 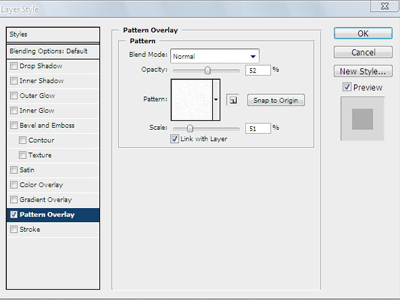 You can always get help from Adobe Kuler if you have trouble choosing colors for your design. 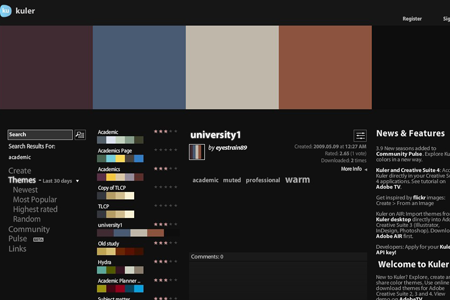 The typographer's one essential task is to interpret and communicate the text: its tone, its tempo, its logical structure, its physical size, all determine the possibilities of its typographic form. The typographer is to the text as the theatrical director is to the script and the musician is to the score. — Robert Bringhurst

Use two or a maximum of three font types in a design. I chose Colaboarte Light for the programmers’ names and Calibri Italic for their descriptions. Both are sans-serif.

Within a single typeface family, variations in weight, width and style can vary the rhythm substantially, thus affecting communication. To control this, I italicized Calibri to a font size of 15 and kept the programmers’ names at 21. Alignment is flush-left. I also used Calibri for the descriptions of illustrations but gave it a different color to distinguish it from the descriptions of programmers. I chose the ChunkFive font for the numerical values in the illustrations.

To envision information — and what bright and splendid visions can result — is to work at the intersection of image, word, number, art. The instruments are those of writing and typography, of managing large data sets and statistical analysis, of line and layout and color. — Edward Tufte, Envisioning Information

For years, we have been displaying information in bars graphs and pie charts. In fact, Edward Tufte coined the term “chartjunk” to refer to useless, uninformative or information-obscuring elements in quantitative displays. But this trend has shifted in recent times with the rise of infographics.

An infographic is all about displaying information in creative ways. The process of designing infographics can help us understand and implement certain graphic design principles much better than by designing for the Web alone. It’s all about applying the fundamental principles of design; we’ll always come up with better results if we can do that well.