It is arguable that there is no goal in web design more satisfying than getting a beautiful and intuitive design to look exactly the same in every currently-used browser. Unfortunately, that goal is generally agreed to be almost impossible to attain. Some have even gone on record as stating that perfect, cross-browser compatibility is not necessary. [Links checked & repaired March/06/2017]

While I agree that creating a consistent experience for every user in every browser (putting aside mobile platforms for the moment) is never going to happen for every project, I believe a near-exact cross-browser experience is attainable in many cases.

In this article, I’ll be describing what I believe are some of the most important CSS principles and tips that can help both new and experienced front-end developers achieve as close to a consistent cross-browser experience as possible, with as little CSS code as possible. 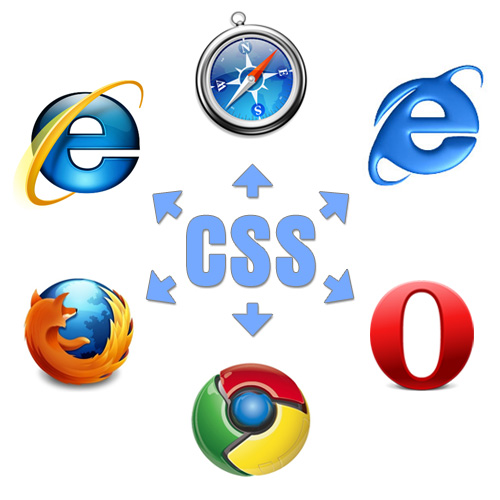 This is one of the first things you should be thoroughly familiar with if you want to be able to achieve cross-browser layouts with very few hacks and workarounds. Fortunately, the box model is not a difficult thing to grasp, and generally works the same in all browsers, except in circumstances related to certain versions of Internet Explorer (more on this later).

The CSS box model is responsible for calculating:

The CSS box model has the following basic rules:

Some important things to keep in mind for dealing with block-level elements:

The box model as its displayed using Firebug in Firefox

Understand the Difference Between Block and Inline

For experienced developers, this is another no-brainer. It is, however, another crucial area that, when fully understood, will cause the light bulb to appear, many headaches will be avoided, and you’ll feel much more confident in creating cross-browser layouts.

The image below illustrates the difference between block and inline elements: 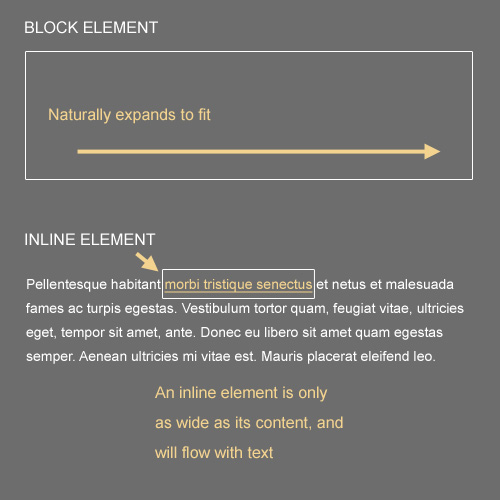 Here are some basic rules that differentiate block elements from inline:

For multi-column layouts that are relatively easy to maintain, the best method is to use floats. Having a solid understanding of how floats work is, therefore, another important factor in achieving a cross-browser experience. 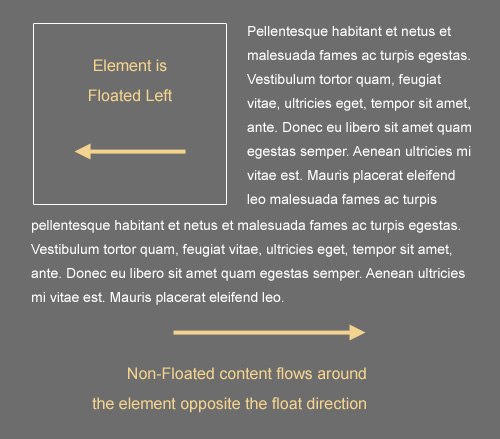 Here are some important things to keep in mind when floating and clearing elements:

Use Internet Explorer First (Or Don’t)

Please note that Smashing Magazine’s team strongly advises against developing websites in Internet Explorer first. In our opinion, sites should be developed in “modern” web-browsers, with standards first and then be tweaked for buggy versions of Internet Explorer. The advice below does not reflect the opinion of the Smashing Editorial team. Agree or disagree? Comment on this article!

Most of what I’ve discussed so far has to do with CSS coding and layout principles. This principle is more related to habits and preferences of most designers. Although we might hate to use IE6 and IE7 in our everyday internet activities, when it comes time to build a client project from scratch, one of the best things you can do is test your layout in those browsers early in development. You might even want to open up a standalone version of IE6 or IE7 and just start your development in that browser.

Of course, you won’t have access to tools like Firebug, but generally for CSS (especially early in development) you won’t need Firebug. It’s much easier to get a layout working first in IE6 and IE7, then fix for other browsers, than to do it the other way around. Waiting until late in the development process to open up IE6 and/or IE7 will likely cause some, if not all, of the following problems:

I wouldn’t expect developers to use Internet Explorer this aggressively for personal projects, web apps, or other non-client work. But for corporate clients whose user base is primarily on Internet Explorer, this tip could prevent a lot of headaches while getting things to work properly, and will definitely make a cross-browser experience much more likely.

Sometimes viewing IE’s problems as “annoying bugs” can create unnecessary negativity, and can hinder development time and future maintenance. Dealing with IE is a fact of life for designers and developers, so just view its problems as you would any CSS issue — and build from there.

If you’re going to start with IE in your development, or at the very least check your layout in IE early on, then you should understand what things Internet Explorer (usually versions 6 & 7) has problems with, or what its limitations are.

A detailed discussion of every possible problem that can occur in Internet Explorer, and a list of all of its CSS compatibility issues is certainly beyond this article. But there are some fairly significant inconsistencies and issues that come up in relation to IE that all CSS developers should be aware of. Here is a rundown of the most common problems you’ll need to deal with:

There are many more bugs, issues, and inconsistencies that can arise in Internet Explorer, but these are probably the most common and most important ones to keep in mind when trying to create a cross-browser experience. I encourage all developers to do further research on many of the issues I’ve mentioned above in order to have a more accurate understanding of what problems these issues can cause, and how to handle them.

Some Things Will Never Look the Same

As already mentioned, creating the exact same experience visually and functionally in every browser is possible, but unlikely. You can get the layout and positioning of elements close to pixel-perfect, but there are some things that are out of the developer’s control.

Discussing all the differences and quirks that occur with form elements across the different browsers and platforms could be an article in itself, so I won’t go into extensive details here. A simple visual demonstration, however, should suffice to get the point across.

Take a look at the image below, which displays the <select> elements on the Facebook home page, as shown in 5 different browser versions (screenshots taken from Adobe’s Browserlab): 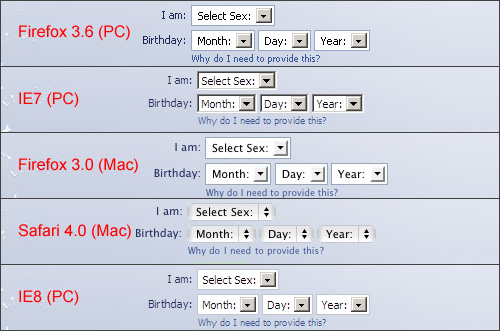 Some form elements can be controlled visually. For example, if the client requires that the submit button looks the same in every browser, that’s no problem, you can just use an image, instead of the default <input type=“submit”>, which, similar to <select> elements, will look different in different browsers.

But other form elements, like radio buttons, textarea fields, and the aforementioned <select> elements, are impossible to style in a cross-browser fashion without complicating matters using JavaScript plugins (which some developers feel harm the user experience).

Another area in which we can’t expect pixel-perfect designs is with regards to fonts, particularly fonts on body copy. Different methods have sprung up to help with custom fonts in headers, and the recently launched Google Font API will contribute to this. But body copy will probably always look different in different browsers.

The graphic below displays screenshots from A List Apart on IE6 and IE7. The grainy text in IE6 is more evident on the heading than in the body copy, but all text displays a marked difference between the two browsers (unless of course the text is an image): 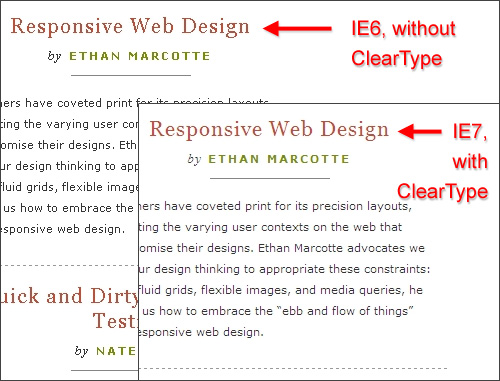 A List Apart’s typography compared in IE6 and IE7

Use a CSS Reset

Ever since I started using a CSS reset for my projects, my ability to create a cross-browser experience has greatly increased. It’s true that most resets will add unnecessary code to your CSS, but you can always go through and remove any selectors that you know will not be a factor (for example, if you don’t plan to use the <blockquote> tag, then you can remove reference to it, and repeat this for any other unused tags).

Many of the margin- and padding-related differences that occur across different browsers become more normalized (even in troublesome HTML forms) when a CSS reset is implemented. Because the reset causes all elements to start from a zero base, you gain more control over the spacing and alignment of elements because all browsers will begin from the same basic settings. 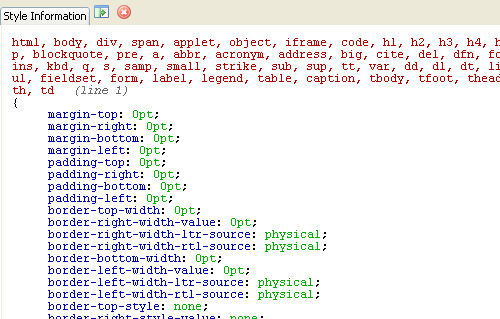 A CSS reset as shown in Firefox’s developer toolbar

Besides the benefits of producing a cross-browser experience, a reset will also be beneficial because you won’t use as many hacks, your code will be less bloated, and you’ll be much more likely to create maintainable code. I recommend Eric Meyer’s CSS reset, which I’ve been using for quite some time now.

If you’re having trouble getting a particular CSS property to display correctly across all browsers, look up the property in the SitePoint CSS Reference to see if it has any compatibility limitations. SitePoint’s reference (which is also available as a hard copy, though not as up to date), includes a useful compatibility chart that displays browser support for every standard CSS property.

Each compatibility chart is accompanied by a fairly detailed description of the bugs that occur in different browsers, and users are permitted to add comments to document new bugs that come up and to provide further explanations on complex CSS issues.

Using this as a guide, you can narrow down the possibilities, and can usually determine whether or not a CSS issue is due to a browser bug, or due to your own misapplication or misunderstanding of the CSS property in question.

While there is so much more that could be discussed on the topic of cross-browser CSS, the principles and guidelines I’ve introduced here should provide a foundation to assist CSS developers in creating as close to a consistent cross-browser experience as is currently possible. Cross-browser CSS is an attainable goal, within reasonable limits.

But, as an epilogue to this article, I also would like to concur with those promoting the use of CSS3 with progressive enhancement, and encourage developers to push new CSS techniques to the limits, even doing so, where possible, on client projects.