Speider Schneider is a former member of The Usual Gang of Idiots at MAD Magazine, “among other professional embarrassments and failures.” He currently writes … More about Speider Schneider ↬

Our core competency is in creating something that is the perfect communication vehicle for the given message. But then subjectivity walks in the door, and the creative is left standing there, looking like an incompetent who needs a committee to complete their work. Let’s see what we can do to fix it.

No matter where you go in the known universe, there is design-by-committee. It has become a pecking order of disaster for the society that used to pride itself on being a mover and shaker and that allowed its mavericks and dreamers to innovate their way to success. 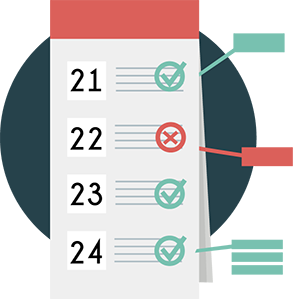 In a business climate fueled by fear and the “Peter Principle,” as it is today, a decision not made is a tragedy averted. So, decision by committee provides a safe and often anonymous process for finger-pointing down the line… inevitably leading to the creative, of course.

Wikipedia describes it thus: The Peter Principle is the principle that “in a hierarchy every employee tends to rise to his level of incompetence.” It was formulated by Dr. Laurence J. Peter and Raymond Hull in their 1969 book The Peter Principle, a humorous treatise which also introduced the “salutary science of Hierarchiology”, “inadvertently founded” by Peter. It holds that in a hierarchy, members are promoted so long as they work competently.

Sooner or later they are promoted to a position at which they are no longer competent (their “level of incompetence”), and there they remain, being unable to earn further promotions. This principle can be modeled and has theoretical validity. Peter’s Corollary states that “in time, every post tends to be occupied by an employee who is incompetent to carry out his duties” and adds that “work is accomplished by those employees who have not yet reached their level of incompetence.

Whether on staff or freelance, we all walk into meetings prepared for our work to be torn to shreds. And it always is. The client sits there trying to explain to you how a logo the size of a small melon should sit on a 9x12-inch ad.

Our core competency is in creating something that is the perfect communication vehicle for the given message. But then subjectivity walks in the door, and the creative is left standing there, looking like an incompetent who needs a committee to complete their work.

Others Have Noticed Its Effects

Michael Arrington, founder and co-editor of TechCrunch, a blog covering Silicon Valley technology, and a widely respected and influential person on the Web, recently wrote:

There’s a saying I love: “a camel is a horse designed by committee.” A variation is “a Volvo is a Porsche designed by committee.” Some of the best product advice I’ve ever heard goes something like “damn what the users want, charge towards your dream.” All of these statements are, of course, saying the same thing. When there are too many cooks in the kitchen all you get is a mess. And when too many people have product input, you’ve got lots of features but no soul.

Through it all, I’ve heard some wondrous and magical statements come from the mouths of non-creatives as they “join in on the fun” of designing in these dreaded committee meetings.

My favorite exchange to date happened in a meeting that a secretary sat in to take notes but who eventually took over the conversation. I looked at her and then the art director, who sat sheepishly quiet (from too many emotional beatings, no doubt), and asked why a secretary would be allowed to give design feedback. She pulled herself up in her chair and said, “Well, you do want this to be the best product it can be?”

“The best it can be.” She was somehow convinced that her opinion overshadowed all others, including those of the art staff. In her mind, she was actually saving the design. Stories like this abound.

You’re Not The Only One

Wanting to feel I was not alone, I posed the question to the art directors among my umpteen connections on LinkedIn. The responses were varied, passionate and maddening at times. One of my favorite Los Angeles art directors gave me a list of her favorite sayings overheard in committee meetings:

My husband says it doesn’t hit him in the gut.

My kids say there are too many words.

My dog didn’t wag its tail.

The waiter said he’s seen something just like that in France.

I’ll know it when I see it. So go back and make more.

What are you doing after work?

The next respondent to my question asked, “Did you forget to take your meds today?” Another chimed in, “I don’t want to give you any stories because I don’t want to cry!”

One creative director added these: “Why isn’t my logo bigger?”, “Why can’t we use all of this empty space over here?” and “It’s too promotional”. He adds: “ Anything from anyone who’s ever said, ‘I’m not creative, but…’ or ‘It needs more… something.’ And anything from anyone who ‘knows what they don’t want but has to actually see what they do want because they can’t describe/direct/vocalize it.”

Plenty of responses advised us to let go and just take the fee and do whatever the client or committee wants. This is a “service industry” after all. One graphic designer wrote:

One thing I try to do is understand why certain decisions have been made, and I do this by questioning the person doing the direction (this could be a colleague, sales person, client, etc.). If that person has legitimate reasons for asking for specific things, and they can back up that it will work, I’d like to know.

Another voice added, “He who pays calls the tune, even if they’re wrong, and even if they have poor taste. That is important to keep in mind.”

As much as I agree, there is still that voice inside me that screams bloody murder at the idiocracy of group decisions. Feeling the same way, an art director in Texas wrote, “The client may pay for the work, but who takes the blame when the client campaign fails miserably because the client did not listen to the advice of the designer?”

Who Should Ultimately Decide?

For better or worse, I agree with another passage in Mr. Arrington’s article:

Product should be a dictatorship, not consensus-driven. There are casualties, hurt feelings, angry users. But all of those things are necessary if you’re going to create something unique. The iPhone is clearly a vision of a single core team, or maybe even one man. It happened to be a good dream, and that device now dominates mobile culture. But it’s extremely unlikely Apple would have ever built it if they conducted lots of focus groups and customer outreach first. No keyboard? Please.

He also illustrates his point brutally with this hard fact:

Digg is sort of on the opposite end of the spectrum. The company has been standing still now for years as Facebook, Twitter and others have run laps around it. But the company is famous for listening to its hard core fanatical users.

My point is best made through the brilliant, funny, intelligent Better Off Ted. In one adventure, the corporation empowers everyone to make decisions about products in committee. See what happens to the simple product. The always classic “Process (aka Designing the Stop Sign)” is another frightening example soaked in truth.

Mr. Arrington believes that the plan trumps all voices. His article ends with a very assertive video about winners and losers. Most creatives choose to let it wash over them and collect their pay check. I suppose I don’t agree because I haven’t seen many pay checks made out to “Dance, monkey, dance!”

From all the responses and stories, it seems there are few ways to live with the design-by-committee lifestyle. Suggesting what a marketing plan or piece of copy is missing or implying that the secretary is unable to spell will only get you pegged as “difficult” and make you appear as though you “overstep boundaries.” Asking a non-creative who gives you excruciating input why they think you’re incapable of doing your job will brand you as “defensive” and “combative.” Give in, and you’ll earn descriptions like “flexible” and “easy to direct.”

The sensible answer is to listen, absorb, discuss, be able to defend any design decision with clarity and reason, know when to pick your battles and know when to let go.

A photographer I know once said, “I’ll give the model a big mole on her face, and the committee focuses on that and are usually satisfied with the momentous change of removing it and leave everything else as is.”

Whether you’re on staff or freelance, the political dance of correctness and cooperation brings a new story and new experience every day. And isn’t that one of the great things about this business… even if it goes around and around sometimes? You can just blame someone using the new buzzword, “Commidiot,” which is a committee member who has no idea what is going on in front of them but feels they have to say something of importance to justify their presence in the room.