Andrew Rossi is a web designer and developer at FORGE and part-time faculty at the University of Dayton. When he isn’t fighting with Photoshop, he likes … More about Andrew ↬

If you work at an agency or design house, chances are that most of your time is spent working on client projects. After months of bending over backwards to meet your clients’ demands, work may start to get a little stale. At this point, it’s okay to become a little selfish and ask yourself: “When was the last time that we have done something for ourselves?”

Take a step back and look at your agency’s portfolio. Is it all client work or are there some products of your own in the collection? It’s normal to have several client projects and maybe one or two experimental in-house pieces in there. However, all work and no play can make an agency a dull place to work.

When was the last time that the thought of a side project made you excited?

Teehan+Lax has ImageSpark. SimpleBits has Dribbble. Fantasy Interactive has Kontain. What does your agency have? Surely, ideas for services and applications such as these have passed through your agency’s collective brain. Were they written down on a napkin somewhere and promptly forgotten? Was there once great fervor but it was pushed to the back burner? Did Father Time step in, kick you in the face and remind you of your already overstuffed schedule?

If that last question hits too close to home, don’t worry. You can knock Father Time right back.

Any idea that is written down and discussed with genuine enthusiasm by your team is worth it—despite how crazy it might sound. What tends to be ridiculous is trying to shoehorn another sizable project into your already tight schedule. With too much client work floating around, it can be overwhelming and difficult to try and get anything else off the ground.

Don’t let that stop you.

What is a hack night?

A “Hack Night” is time set aside to experiment, but with a group of like-minded people or coworkers. Pick one night out of the week and stay late. In this extra time, get organized and plan your attack for getting your hobby project off the ground. Even just an hour past the sound of the factory whistle is enough to be productive. Two hours after work is enough to get you a basic plan and the beginnings of something special. Three hours… well you get the idea. The more time devoted to a side project, the more that can be accomplished. The point is that time can be made outside of work but within the confines of the workplace. Come up with a good idea and execute it with your workmates within the time that has been set aside for your idea.

Personally, I have been able to take part in such an event. Every Thursday night a handful of coworkers and I stay after five to build this little side project of ours. How long do we stay? Depends on the schedule. Yes, we have created a schedule for things outside of our normal workday schedule. Trust me, it’s organized. Every person has a job to do and he or she must adhere to the schedule for this project to be successful.

Hobbies (like model ship building) are a great way to pass time. You start it when you want and you can end it on your own time, leisurely piecing it together along the way, when you can fit it into your day.

Hobby projects work a little differently if you are taking them seriously. Sure, you can spend a few hours every week working on this “next big idea,” but if there is no schedule, chances are you won’t get anything done. It’s even worse when you announce your big idea aloud to your coworkers.

“Hey, everybody! I am going to ride my lawnmower across the continent!”

Believe it or not, studies have shown that announcing your goal makes you less motivated to actually accomplish it. As soon as you announce a goal, your brain registers it as complete, after which the motivation starts to wane. This, of course, pertains to working on projects on your own and can be mitigated with working in a group setting.

If you schedule time with others, you will be more motivated to get the task at hand finished in a timely manner. Someone will always be there to keep you on task and you will be more likely to move forward when everyone is working towards one single goal.

Tests done since 1933 show that people who talk about their intentions are less likely to make them happen.

Announcing your plans to others satisfies your self-identity just enough that you’re less motivated to do the hard work needed.

In 1933, W. Mahler found that if a person announced the solution to a problem, and was acknowledged by others, it was now in the brain as a “social reality”, even if the solution hadn’t actually been achieved.

NYU psychology professor Peter Gollwitzer has been studying this since his 1982 book “Symbolic Self-Completion” and recently published results of new tests in a research article, “When Intentions Go Public: Does Social Reality Widen the Intention-Behavior Gap?”

Four different tests of 63 people found that those who kept their intentions private were more likely to achieve them than those who made them public and were acknowledged by others.

Several things stem from this type of group work execution.

First off, your imagination is getting a workout.

In many cases, doing nothing but client work can cause a bit of stagnation within your organization. Brainstorming sessions may (and should) be taking place, but most of the time it isn’t happening because of your idea. The idea might be owned by the client and that might not be as stimulating as the plan you have been wanting to hatch.

Hack Nights allow you to take your idea and run free with it.

Secondly, successful ideas may expand into something extremely popular with the internet masses. Your idea could be the next Twitter or some other pioneering social network. Your idea might be a way to launch coffee grounds out of a cannon right to a customer’s door with extreme accuracy. Who knows? One cannot gain anything without attempting to do something first, right?

Hack Nights may allow you to get your name out there.

Lastly, this could be a turning point for your agency. The profit model might shift from that of a design house that produces work for clients to a company that makes most of its profit from a service it provides. For example, EllisLab charges for ExpressionEngine, while simultaneously spending the rest of their time experimenting and improving other projects such as CodeIgnitor because they can afford to spare the time. MK12, a motion graphics agency, took a whole year off all client work to produce their own in-house project, a film entitled History of America. Both of these examples show that it is possible to allow more time for personal experimentation and innovation. 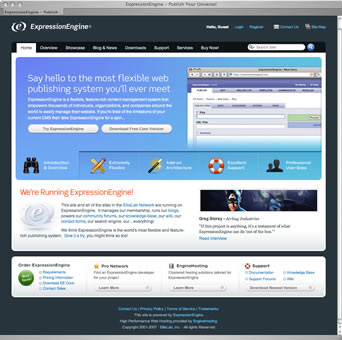 Hack Nights can start a new chapter in the advancement of your agency.

These are all best-case scenarios and it’s still possible for anybody to succeed. Your “next big idea” could also fail. It could fail horribly. Even so, that possibility is never something that should discourage your efforts to innovate and push yourself and your agency forward.

So if morale and innovation could stand to be boosted within your team, give the Hack Night approach a good old college try.