This is the most exciting “Ask the Expert” interview that we’ve had so far on Design Informer. A few months back, I had the opportunity to speak with Milton Glaser thanks to one of his assistants, Scarlett Rigby. [Links checked January/17/2017] I was able to ask Milton Glaser some questions about a few different topics such as art, design, education and more. If you’re not familiar with Milton Glaser, he is a world renowned graphic designer who is probably most famous for creating the
I Love New York logo.

This is the most exciting “Ask the Expert” interview that we’ve had so far. A few months back, I had the opportunity to speak with Milton Glaser thanks to one of his assistants, Scarlett Rigby.

I was able to ask Milton Glaser some questions about a few different topics such as art, design, education and more. If you’re not familiar with Milton Glaser, he is a world renowned graphic designer who is probably most famous for creating the I Love New York logo.

Go ahead and listen to the question and answer session below. The audio might be a little weird in the beginning but it definitely gets better after about 30 seconds. You can also read the entire interview and learn more about Milton Glaser by checking out the links at the end of this post.

Well, I’ve been thinking about this for a very long time. Let me tell you a summary of what I’ve come to in my life. Art has a very specific purpose or else it wouldn’t have survived, and it’s purpose is the survival of the species. Art is the mechanism to help survival. So one might ask, so how does art help survival? The issue is that it makes you more attentive. In the presence of art, you become attentive, and the story I always tell about is this.

Once I sat down in front of my mother when I was 17, and I decided that in the kitchen table, I would do a portrait of her. At that moment, I looked at her face, and you know how the mind shifts when you make a determination that you are going to draw something, I realized that I had not the faintest idea of what she looked like, and that it was only by deciding I would draw her that I became conscious of her appearance. Because through the years, I have become immune to it, and as we become immune to everything we experience, and particularly those things we experience most frequently.

So, my bit of extrapolation is that after I decided that the real purpose of art was to make us attentive so we could see what was in front of us and also to understand what was real, as opposed to the pre-conceptions we had about things. So art serves us by in a Buddhist sense, making you able to pay attention to what is in front of you, cause otherwise, you can’t seen anything or experience reality.

If that’s my definition, then it suggests that you cannot tell art by virtue of medium, or function, or anything else except by the fact of its raising your consciousness to a degree that you are attentive. And so if something produces the state of attentiveness, whether it’s a drawing, or a guy making a cheese sandwich, we can call it art, at least by my description. I have no other criteria for judging what art is, and certainly not the lunacy and the perversion of the art world or the authorities of the subject,  but if it makes me attentive and if my perception of reality is modified by something I’ve seen, in a way your perception of a landscape is modified after you see a Cezanne landscape, you realize Cezanne has enabled you to see an aspect of that you were not conscious of. He’s made you more attentive to that which is contained within the landscape. So if it does that, if anything does that to me, I put it in the art category. If it’s a big painting and it’s in a museum and it doesn’t do that to me, for me, it’s not art.

Art is functional because it has a purpose. But a day often transcends its purpose. If design makes you attentive, then it’s art. In the same way that if you look at a poster by Lautrec and a drawing by Lautrec, they both make you attentive, and so I would say, they are both art even though one would be easily categorized as design, and the other as art, because it’s done with oil paint on canvas. But you can see in the presence of both of them, that either can make you attentive and then we must say, either the poster or the drawing by Lautrec is a work of art.

So it’s not the category of experience or even whether it has a functional element of it in itself, but rather, whether it makes you attentive.

Well, that was sort of a semi-joke, but not entirely. The thing about the computer is that it’s an extremely powerful instrument, and like all tools, it changes your perception of what is real, what is appropriate, what is pleasant, what is proportional. It has all these characteristics, in a same way that a pencil or watercolors or a crayon has, which is that they change the way you think about what you are doing. But the computer is so powerful and so dramatic in its effect on your perception of what is real and what is appropriate that you have to be very cautious that it doesn’t dominate your sensibilities. And what you see around you of work done by using a computer is the domination of the tool over the aesthetic or the judgment  of the user.

So I think you have to be very strong about your consciousness of form, of color, of shape, and of meaning before you start using the computer or else, it will run all over you.

Well, It’s a tough question, and I know it’s often codified and done as a process, but it’s harder than that. The issue is that all this stuff exists in your brain already and the question is how you access it and what you believe about your own process.

I depend on my unconscious to do most of my work by now because I’ve spent so many years working consciously to get my mind into shape so it can work unconsciously. So my process is very vague. Sometimes, I do something, I do it immediately and it’s over. Sometimes, I take something and will work on it for weeks because it’s not coming forth. And I also realize that you have to work this way independently of what you’re getting paid, because if you’re getting a lot of money, you think that you should spend more time on it. If you’re getting little money, you think you can only spend little time. My feeling is very often that it’s opposite. The jobs that have little money are very often those that have the most creative potential, cause people who are paying you a lot, typically in corporate life, also want to control  what it is you do more, and as a result you have to accomodate their needs more than your own needs or even the needs of the job. So my process is I would say at best, random, and that I depend on after 60 years of doing this stuff, the fact that there’s a lot of stuff at the back of my mind and the job is to just bring it forward.

Well, that’s so boring, logos, you know why it’s talked about, because that’s where the money is. Doing a logo is one of the most boring activities of the design profession. There are so many more things more interesting.

Doing a logo, you want to be memorable, you want to be fresh, you want to be familiar enough so people will not reject you, you don’t want to be to complex, you want to have an internal joke, you want to move the viewer in a perception so that when they first look at it, maybe they don’t quite understand it, and then a fraction of a second later, they get the idea, because that act between seeing and understanding is critical, and a good logo, you look at it and there’s a little jump before you understand it. That’s the success of the “I LOVE NY” because you have to translate it from “I” which is a complete word to “heart” which is a symbol for feeling to “NY” which are initials for a place. You want to do a logo that’s a little bit more than decorative, although sometimes, that’s all you can do, something that looks good on the page, and one very often settles for that. 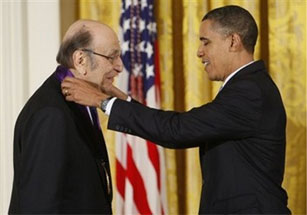 Oh, I don’t know. I live day to day, all I do is come in everyday and hope that I can do something that I didn’t already know before I came in, and that’s about it. The future for me is just a question of the experiences of working with people I like and producing things that I think are interesting.

I have no such construct. I think my best work is the fact that I have been able to stay in it so long, and still be interested in doing it. That is an accomplishment. It’s so easy to get bored and to get indifferent to what you do, and the fact that you can still have the sense of enthusiasm and expectation about a day’s work is really my best accomplishment.

Oh, people always ask me that as it were answerable. The only advise I would give is that you have to have courage and the willingness to devote your life to it, and the enthusiasm to persist. Outside of that, there’s nothing!

Deciding to be a Graphic Designer

I decided to be an artist when I was five years old. I made a conscious decision that making things was the thing that I wanted to spend my life doing. And it really was when I was five.

I don’t even know where to begin that. If you are a genius, then you don’t need school but there are a very few geniuses in the universe. So everyone needs school as much for the opportunity to spend their time doing something to learn something as anything else. I mean, you have time to spend your life devoted to learning and only when you’re in school.

What I think is important for people io to continue the idea of learning  after they get out of school so the idea of continued development  becomes integrated into their brain. But I don’t know any self taught geniuses in this field. I don’t know a single one who said I didn’t go to school, I just picked it up myself.  I don’t know anybody like that. There may be somebody like that. But its hard enough to become good by having a good education. I think it’s virtually impossible to become good without that education. I can be wrong, but I haven’t seen it.

This was just a look inside the mind of Milton Glaser. To read more about Mr. Glaser and to find out more about his ideas, thoughts and philosophies, check out the following resources and websites.