DDavid Travis is a user experience consultant and trainer at Userfocus. He has a BSc and a PhD in psychology and he is a Chartered Psychologist. More about David Travis ↬

How do you make decisions? If you’re like most people, you’ll probably answer that you pride yourself on weighing the pros and cons of a situation carefully and then make a decision based on logic. You know that other people have weak personalities and are easily swayed by their emotions, but this rarely happens to you. You’ve just experienced the fundamental attribution error — the tendency to believe that other people’s behaviour is due to their personality (“Josh is late because he’s a disorganised person”) whereas our behaviour is due to external circumstances (“I’m late because the directions were useless”). Cognitive biases like these play a significant role in the way we make decisions so it’s not surprising that people are now examining these biases to see how to exploit them in the design of web sites. I’m going to use the term ‘persuasion architects’ to describe designers who knowingly use these techniques to influence the behaviour of users. (Many skilled designers already use some of these psychological techniques intuitively — but they wouldn’t be able to articulate why they have made a particular design choice. The difference between these designers and persuasion architects is that persuasion architects use these techniques intentionally).

How do you make decisions? If you’re like most people, you’ll probably answer that you pride yourself on weighing the pros and cons of a situation carefully and then make a decision based on logic. You know that other people have weak personalities and are easily swayed by their emotions, but this rarely happens to you.

There are 7 main weapons of influence in the persuasion architect’s arsenal:

How do persuasion architects apply these principles to influence our behaviour on the web?

This principle tells us that if we feel we have been done a favour, we will want to return it. If somebody gives you a gift, invites you to a party or does you a good turn, you feel obliged to do the same at some future date.

Persuasion architects exploit this principle by giving users small gifts — a sample chapter from a book, a regular newsletter or just useful information — in the knowledge that users will feel a commitment to offer something in return. 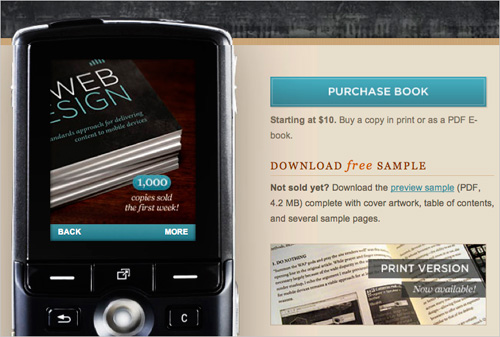 Fig. 1: Book publishers offer free sample chapters in the hope that you’ll reciprocate the favour and buy the book.

That ‘something in return’ need not be a purchase (not yet, anyway). Persuasion architects know that they need to contact prospective customers on several occasions before they become an actual customer — this is why regular newsletters are a staple offering in the persuasion architect’s toolkit. So in return they may simply ask for a referral, or a link to a web site, or a comment on a blog. And note the emphasis on ‘ask’. Persuasion architects are not shy of asking for the favour that you ‘owe’ them. (By the way, if you’ve enjoyed this article, please share it on Twitter!).

Fig. 2: Seth Godin knows how to leverage the principle of reciprocation. This comes from one of Seth’s free PDFs and you’ll notice he’s not shy of asking you to return the favour. Large view

This principle tells us that we like to believe that our behaviour is consistent with our beliefs. Once you take a stand on something that is visible to other people, you suddenly feel a drive to maintain that point of view to appear reliable and constant.

A familiar example of this in action is when comments on a blog degrade into a flame war. Commentators are driven to justify their earlier comments and often become even more polarised in their positions. 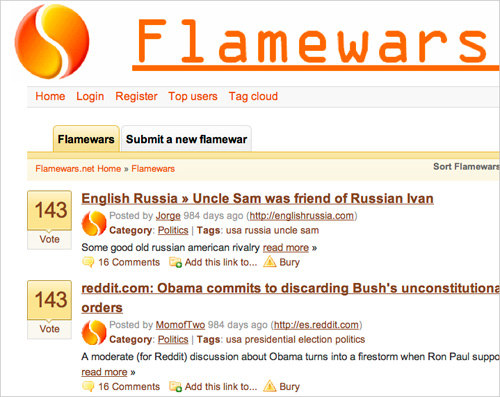 Fig. 3: Flamewars.net contains many examples of people justifying their commitment to comments they have made on a blog posting.

Persuasion architects apply this principle by asking for a relatively minor, but visible, commitment from you. They know that if they can get you to act in a particular way, you’ll soon start believing it. For example, an organisation may ask you to ‘Like’ one of their products on Facebook to watch a video or get access to particular content. Once this appears in your NewsFeed, you have made a public commitment to the product and feel more inclined to support it. 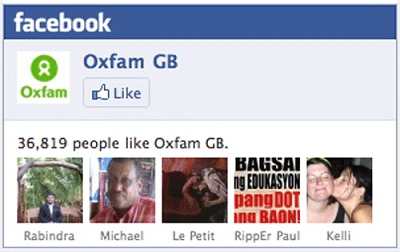 Fig. 4: Oxfam uses the principle of commitment in the knowledge that a small change in behaviour will lead to larger changes later on.

This principle tells us that we like to observe other people’s behaviour to judge what’s normal, and then we copy it.

Persuasion architects apply this principle by showing us what other people are doing on their web sites. For example, researchers at Columbia University set up a web site that asked people to listen to, rate and download songs by unsigned bands. Some people just saw the names of the songs and bands, while others — the “social influence” group — also saw how many times the songs had been downloaded by other people.

In this second group, the most popular songs were much more popular (and the least popular songs were less popular) than in the independent condition, showing that people’s behaviour was influenced by the crowd. Even more surprisingly, when they ran the experiment again, the particular songs that became “hits” were different, showing that social influence didn’t just make the hits bigger but also made them more unpredictable.

Some familiar examples of social proof on the web are, “People who shopped for this product also looked at…” feature and Amazon’s, “What do customers ultimately buy after viewing this item?”.

Persuasion architects also exploit this principle in the power of defaults. They know that the default setting of a user interface control has a powerful influence over people’s behaviour. We tend to see the default setting as a ‘recommended’ option — the option that most other people would choose in our situation. There are many examples of this being used as a black hat usability technique, where additional items (like insurance) are sneaked into the user’s basket.

Fig. 6: When you book a flight, RyanAir sneak travel insurance into your basket too.

“I’m more likely to act on information if it’s communicated by an expert.”

This principle is about influencing behaviour through credibility. People are more likely to take action if the message comes from a credible and authoritative source. That’s why you’ll hear people name dropping and it’s also what drives retweets on Twitter. 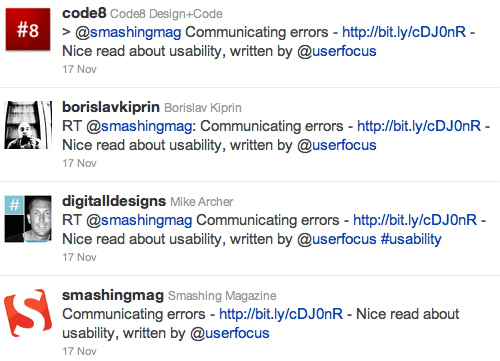 Fig. 7: A tweet from @smashingmag is likely to be retweeted because the brand has such authority.

For design guidance, we can turn to the Stanford Persuasive Technology Lab (founded by B.J. Fogg) as they have developed a number of guidelines for the credibility of web sites. These guidelines are based on research with over 4,500 people and are based on peer-reviewed, scientific research. Thanks to their research, we know that you should highlight the expertise in your organisation and in the content and services you provide; show that honest and trustworthy people stand behind your site; and avoid errors of all types, no matter how small they seem.

Persuasion architects exploit this principle by providing glowing testimonials on their web site. If it’s an e-commerce site they will have highly visible icons showing the site is secure and can be trusted. If the site includes a forum, they’ll give people the opportunity to rate their peers: for example, some web forums (like Yahoo! Answers) let users vote up (or down) answers to posted questions. The top ranked answer is then perceived to be the most authoritative. 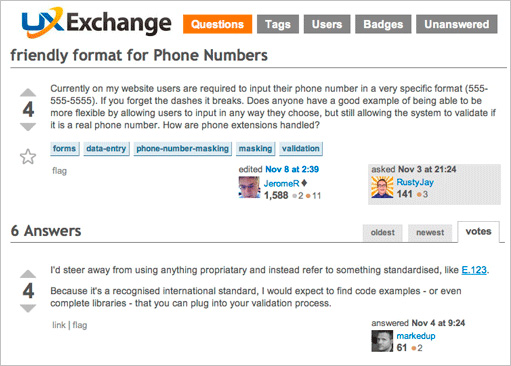 Fig. 8: UXExchange allows users to vote up and vote down answers to questions, ensuring that the most authoritative answer rises to the top.

This principle tells us that people are more likely to want something if they think it is available only for a limited time or if it is in short supply. Intriguingly, this isn’t just about the fear of missing out (a kind of reverse social proof). Scarcity actually makes stuff appear more valuable. For example, psychologists have shown that if you give people a chocolate biscuit from a jar, they rate the biscuit as more enjoyable if it comes from a jar with just 2 biscuits than from a jar with 10.

Persuasion architects exploit this by revealing scarcity in the design of the interface. This could be an item of clothing that is running short in your size, theatre tickets that are running out, or invitations to a beta launch. They know that perceived scarcity will generate demand.

Related to this is the ‘closing down’ sale. One of the artists at my friend’s art co-op recently decided to quit the co-op and announced this with a sign in-store. She had a big rush on sales of her art. Then she decided not to quit after all. So pretending to go out of business might be a ploy!

Fig. 9: Phrases like ‘only 4 left in stock’ seem to stimulate a primal urge not to miss out.

“I’m strongly influenced by the way prices are framed.”

This principle acknowledges that people aren’t very good at estimating the absolute value of what they are buying. People make comparisons, either against the alternatives you show them or some external benchmark.

One example is the way a restaurant uses an “anchor” dish on its menu: this is an overpriced dish whose sole aim is to make everything else near it look like a relative bargain. Another example is the Goldilocks effect where you provide users with three alternative choices. However, two of the choices are decoys: one is an overpriced, gold plated version of your product; another is a barely functional base version. The third choice — the one you want people to choose — sits midway between the other two and so feels “just right.” 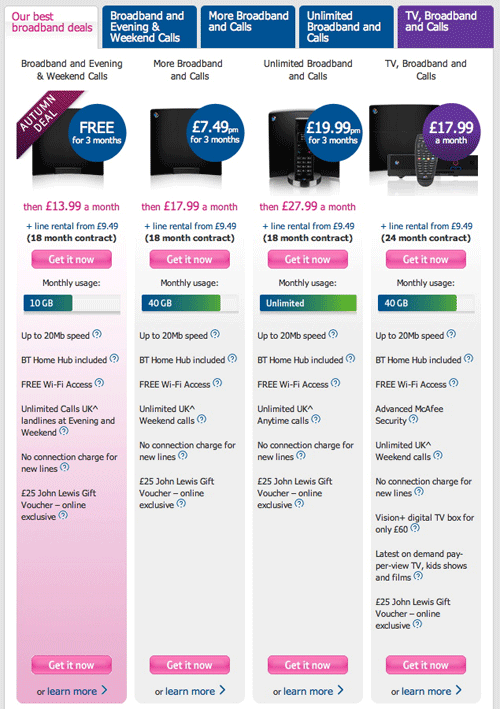 Fig. 10: BT’s ‘Unlimited broadband and calls’ options seem deliberately overpriced compared to the ‘TV, Broadband and Calls’ option presumably since it wants to to boost its share of TV customers.

“My attention is drawn to what’s relevant to me right now.”

This principle tells us that people are more likely to pay attention to elements in your user interface that are novel (such as a coloured ‘submit’ button) and that are relevant to where there are in their task. For example, there are specific times during a purchase when shoppers are more likely to investigate a promotion or a special offer. By identifying these seducible moments you’ll learn when to offer a customer an accessory for a product they have bought. 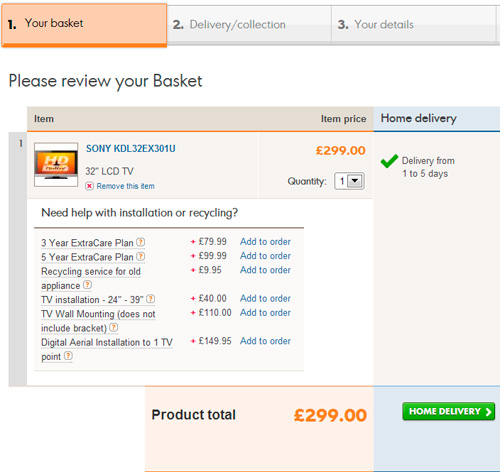 Fig. 11: After placing an order for a TV at the Comet web site, the designers encourage you to add other relevant items to your basket. This is exactly the right time to make the offer: once you’ve ordered the TV they remind you that you’ll need to install it.

Where to go next

Here are some great resources to find out more about persuasion architecture.