Quick summary ↬ This has been an interesting week for the web design community, to say the least. The W3C revealed a new HTML5 logo to help designers and developers ‘tell the world’ that they’re using HTML5. The logo was designed by Ocupop design agency, and it’s licensed under Creative Commons Attribution 3.0, a permissive license that allows ‘remixing’ of the licensed work.

This has been an interesting week for the web design community, to say the least. The W3C revealed a new HTML5 logo to help designers and developers ‘tell the world’ that they’re using HTML5. The logo was designed by Ocupop design agency, and it’s licensed under Creative Commons Attribution 3.0, a permissive license that allows ‘remixing’ of the licensed work. The logo has been made available on stickers and t-shirts, and there’s a gallery already promoting examples of the logo in use.

The logo’s official site includes a “badge builder” that customizes its orientation and allows you to add supplementary icons to indicate support for the different technologies that have become associated with HTML5. 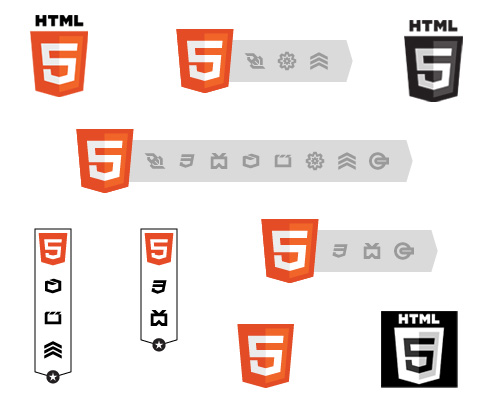 According to the W3C Blog, the purpose of the logo is as follows:

We intend for it to be an all-purpose banner for HTML5, CSS, SVG, WOFF, and other technologies that constitute an open web platform. The logo does not have a specific meaning; it is not meant to imply conformance or validity, for example. The logo represents “the Web platform” in a very general sense.

That all-encompassing definition has met with some opposition from Jeremy Keith. According to Keith, while he does approve of the logo’s design, he disagrees with the blurring of the lines that separate the web technologies that the logo is supposed to represent. Keith doesn’t have a problem with the media using the term “HTML5” to cover this broad area, but he feels it’s not appropriate to push this kind of terminology in the web development industry.

In support of the definition, Ocupop Creative Director Michael Nieling said in a statement that “HTML5 needs a consistent, standardized visual vocabulary to serve as a framework for conversations, presentations, and explanations.”

Keith’s concerns are valid. The logo will certainly strengthen the awareness of HTML5 (which is something we all want), but it’s difficult to accept that something like WOFF, which is a web font format and has nothing to do with the HTML5 spec, will fall under the “HTML5” umbrella. Similarly, CSS3 does not belong in that scope. But interestingly, you’ll notice in that quote from the W3C blog post that the “all-purpose banner” includes “CSS” – so it’s not just the new stuff in CSS3, it’s all of CSS. I can’t see many people being too happy about this.

And if that wasn’t enough, before the web design community had a chance to exhale, the WHATWG Blog published a post entitled “HTML is the new HTML5”, announcing two changes: (1) The HTML specification will be known simply as “HTML” (dropping the “5”); and (2) The spec will be considered a “living standard”, not just a draft, dropping use of the “snapshot” model of development.

This article doesn’t intend to offer too much of an opinion on these matters, as it’s still early. But we know many in the industry want to voice their thoughts, so we’re encouraging you to offer your comments on the logo, its stated purpose, and the further developments on the term “HTML5” announced on the WHATWG blog. It certainly has been an important week in web development, so we’d love to get your thoughts on all of this.

Evidently, late last week, just before this article was published, the FAQ was updated, in response to the furor:

Now its meaning excludes the non-HTML5 technologies, leaving those for the supplementary icons. The FAQ says:

This logo represents HTML5, the cornerstone for modern Web applications.