Tyler Tate is a user interface designer at Vyre in London. He is the creator of the 1KB CSS Grid, and his latest venture is TwigKit. More about Tyler ↬

Quick summary ↬ CSS grid frameworks can make your life easier, but they’re not without their faults. Fortunately, modern techniques offer a new approach to constructing page layouts. But before getting to the solution, we must first understand the three seemingly insurmountable flaws currently plaguing CSS grids.

CSS grid frameworks can make your life easier, but they’re not without their faults. Fortunately for us, modern techniques offer a new approach to constructing page layouts. But before getting to the solution, we must first understand the three seemingly insurmountable flaws currently affecting CSS grids.

Floated elements must also be cleared, often requiring unnecessary elements to be added to the page. This is illustrated by the “clearing” div that ships with 960.gs:

While CSS grids work well for fixed-width layouts, dealing with fluid percentages is trickier. While most grid systems do provide a fluid option, they break down when nested columns are introduced. In the 1KB CSS Grid example below, .grid_6 would normally be set to a width of 50%, while .grid_3 would typically be set to 25%.

But when .grid_3 appears inside of a .grid_6 cell, the percentages must be recalculated. While a typical grid system needs just 12 CSS rules to specify the widths of all 12 columns, a fluid grid would need 144 rules to allow for just one level of nesting: possible, but not very convenient.

Responsive Web design is the buzzword of the year. While new tools such as 1140 CSS Grid and Adapt.js are springing up that enable you to alter a page’s layout based on screen size or device type, an optimal solution has yet to arrive.

Blame It On The Tools

All three of these problems directly result from the limitations of our existing tools. CSS leaves us with the ultimatum of either compromising our principles by adding presentational classes to mark-up, or sticking to our guns and forgoing a grid system altogether. But, hey, we can’t do anything about it, right?

Well, not so fast. While we wait for browsers to add native CSS support for this flawed grid layout module, a futuristic version of CSS is available today that’s already supported by every CSS-enabled browser: LESS CSS. 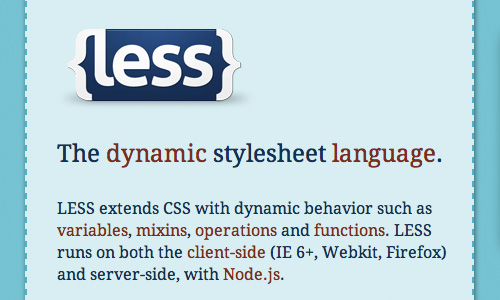 You’ve probably heard of LESS but perhaps have never given it a try. Similar to SASS, LESS is extends CSS by giving you the ability to use variables, perform operations and develop reusable mixins. Below are a few examples of what it can do.

Specify a value once, and then reuse it throughout the style sheet by defining variables.

The above example would compile as follows:

In this example, 1px is multiplied by 3 to yield the following:

Most powerful of all, mixins enable entire snippets of CSS to be reused. Simply include the class name of a mixin within another class. What’s more, LESS allows parameters to be passed into the mixin.

Having been skeptical of LESS at first, I’m now a strong advocate. LESS style sheets are concise and readable, and they encourage code to be reused. However, there are some potential downsides to be aware of:

A Note on Compiling LESS

There are three approaches to compiling LESS style sheets into CSS:

The innovations that LESS brings to CSS are the foundation for a powerful new approach to constructing page layouts. That approach is the The Semantic Grid System. This new breed of CSS grid shines where the others fall short: 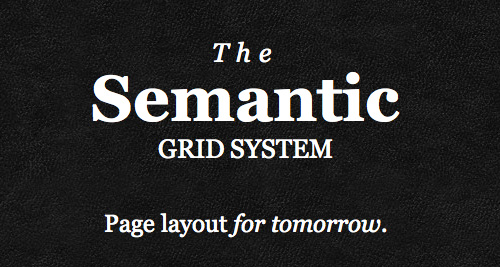 Sounds too good to be true? Here’s how it works.

Next, define variables for the number of columns, and set the desired widths for the column and gutter. The values entered here will result in a 960-pixel grid system.

The grid is now configured and ready to be used for page layout.

Now that the grid has been configured, consider two elements on an HTML page that you would like to lay out side by side.

The side-by-side layout can be achieved by passing the desired number of grid units to the .column() mixin (which is defined in the grid.less file).

The above LESS would be compiled to CSS as the following:

This page demonstrates the result. What makes this approach so different is that it does away with ugly .grid_x classes in the mark-up. Instead, column widths are set directly in the style sheet, enabling a clean separation between declarative mark-up and presentational style sheets. (It’s called the semantic grid for a reason, after all.)

So, What’s Behind the Curtain?

For the curious among you, below are the mixins at the center of it all. Fortunately, these functions are hidden away in the grid.less file and need not ever be edited.

The example above demonstrates a fixed pixel-based layout. But fluid percentage-based layouts are just as easy. To switch from pixels to percentages, simply add one variable:

With no other changes, the compiled CSS then becomes this:

This example shows how the percentages are dynamically calculated using LESS operations, which also applies to nested columns.

No modern grid system would be complete unless we had the ability to adapt the layout of the page to the size of the user’s screen or device. With Semantic.gs, manipulating the grid using media queries couldn’t be any easier:

Try It For Yourself

Just a couple of days ago Twitter released a project called Bootstrap which provides similar (but more limited) grid system built using LESS variable and mixins. The future of the CSS grid seems to be taking shape before us.

The Semantic Grid System delivers the best of both worlds: the power and convenience of a CSS grid and the ideal separation of mark-up and presentation. Download the grid for yourself, fork it on GitHub, and let us know what you think! 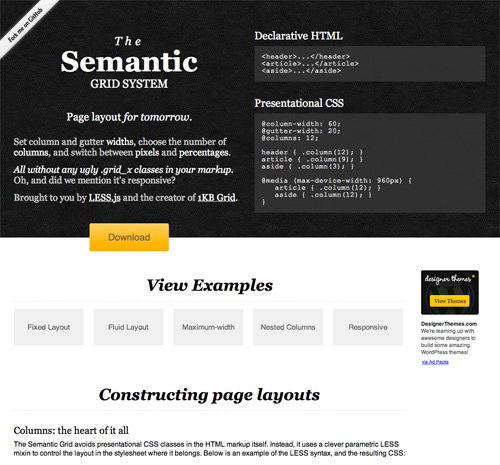