Jason is an educator, business owner, and author. As one of the first dozen professors of website design in the country, his lectures and workshops dynamically … More about Jason ↬

Quick summary ↬ According to W3Techs, almost 55% of the 1 million most visited websites that are run on a content management system (CMS) are run on WordPress. WordPress is a darn fine CMS and is stable and easy to use, but so are Joomla and Drupal. So, why does WordPress have the lion’s share of the top 1 million websites?

According to W3Techs, almost 55% of the 1 million most visited websites that are run on a content management system (CMS) are run on WordPress. WordPress is a darn fine CMS and is stable and easy to use, but so are Joomla and Drupal. So, why does WordPress have the lion’s share of the top 1 million websites?

This article does not set out to prove that one CMS is “better” than another. WordPress, Joomla, Drupal and dozens of other platforms are mature, stable, great CMS’ that can do a fantastic job in most cases.

As a point of reference, at Gravity Switch, about 50% of our projects are in Drupal and about 35% in WordPress; the rest are in other CMS’ or written by hand in PHP or built on a framework such as CakePHP, Django or Ruby. Some of you might be squirming in your seats asking, “But why don’t you just use [insert your CMS of choice]?” The answer is simple: blind luck.

How do you feel about building HTML emails these days? In his online workshop on Building Modern HTML Emails, Rémi Parmentier will show how to code bulletproof, responsive HTML emails that work well in Gmail, Apple Mail, Yahoo and Outlook today. Online, and live. Sep 16–24, 2021. 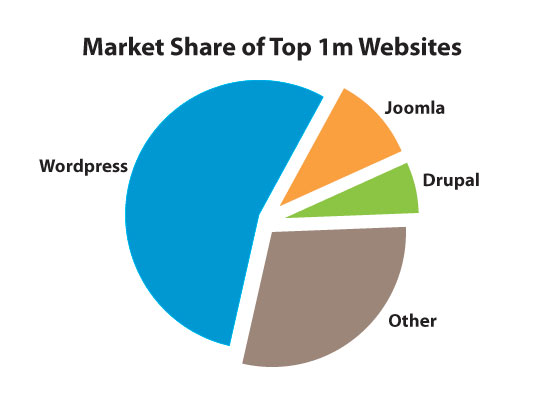 Breakdown of websites with a clearly identifiable CMS, according to W3Tech’s survey of the top 1 million domains.

A couple of our top clients asked us to use Drupal or WordPress (based on their own technical requirements or preferences), so right now we have more in-house experience with WordPress and Drupal. Our job is to be flexible and to help our clients do their jobs better. While we’re able to guide the folks who don’t have a preference, our job is not to evangelize one technology over another.

So, rather than attempt to convince you that one CMS is best, I’ll share some data that compares WordPress to Drupal and Joomla in order to understand how and why WordPress got the crown.

When I want to understand how popular something is, one of the first places I go to is Google Trends. Based on WordPress’ market share, I expected to find that it is searched for about five times as often as Joomla and about nine times as often as Drupal.

What I found was quite different:

It turns out that, internationally, Joomla is almost as well known as WordPress, and Drupal is searched for about a quarter as often.

This data suggests that:

Let’s be honest. It probably doesn’t matter which of the top 20 CMS’ you choose. (Curious what they are? W3Techs lists them.) They’re all reasonably secure, stable and easy to maintain. While WordPress might have been “just blogging software” for a time and didn’t have the features needed to be a true CMS, those days are gone. Anyone who says otherwise is trolling or living in the past.

In fact, the “SxSW Web Content Management System Showdown” a couple of years back clearly showed WordPress, Joomla and Drupal all to be powerful and expandable systems.

So, what does WordPress do differently than Joomla, Drupal and others?

Unlike Joomla and Drupal, which were designed as proper CMS’, WordPress was designed to solve a problem. Also, because WordPress had a clear target audience (bloggers), its developers were able to build a successful business at WordPress.com pretty much from day one.

The story of how WordPress established itself is simple: bloggers had problems, and WordPress provided services to fix those problems.

By contrast, Drupal and Joomla tried to be “everything a geek might need”. Alas, capitalism always wins. Having clearly defined uses is more effective than working in the abstract.

Let’s face it: WordPress is the easiest CMS for a non-techie to install and set up, and the easiest to use out of the gate. That counts for a lot.

WordPress is committed to serving non-technical users who want to communicate easily and effectively. So, its appeal makes sense when you consider that people who go into communications fields (including sales and marketing) tend not to be introverted technologists.

And because of its corporate ties, WordPress never had the luxury of being able to tell its users to RTFM, nor could it shrug and say, “It works for me.” Rather, the features of WordPress were driven by content people, not techies. Every feature had to be usable by bloggers, including non-technical ones.

Ease of use is an issue that both Joomla and Drupal are working on. But it doesn’t come naturally to them, evidenced by the slow progress they’re making and the fact that their ships are still being sailed by technologists. For example, Drupal still doesn’t even ship with a WYSIWYG editor. Unbelievable but true.

OK, I know that calling WordPress “blogging software” is taboo in the WordPress community. But before you hardcore aficionados get defensive about WordPress being “more than blogging software,” hear me out. The blog factor is a great strength that helped to establish WordPress as a CMS.

If we extrapolate this, we can say that approximately 9% of all WordPress.com blogs (or 34,000 blogs) are in the top 1 million websites.

Let’s put that into perspective.

According to W3Techs, 2.7% (27,000) of the 1 million most visited websites in the world run Joomla, and 1.7% (17,000 websites) run Drupal. That means that almost as many popular bloggers use WordPress.com-hosted websites as use Drupal and Joomla combined.

This doesn’t include people who have a custom installation of WordPress, only those with WordPress.com accounts!

Let’s slice that number differently. The graphs below show how many WordPress, Drupal and Joomla websites are dedicated blogs or news websites, compared to being straight CMS websites.

Percentage of most popular websites run on WordPress, Drupal and Joomla that are blogs or news-related.

Think about it. If the content of a website determines its popularity, then websites that offer news or blog posts will make up a sizeable percentage of the top million websites. A blogger or news provider understands by nature that content is more important than technology, so their ability to manipulate content will win out over “technical” features.

By plan or by luck, WordPress was designed from the ground up to meet the needs of the people who best understand how to communicate digitally.

It’s also worth noting that many of the top blogs in the world are technology-related. This is pretty relevant, because when websites such as SitePoint, Six Revisions and Smashing Magazine run on WordPress, their readers (i.e. people who are interested in Web technology) are more likely to use it, too. This gives WordPress a huge amount of built-in credibility, as well as the potential for a statistically significant editorial bias. 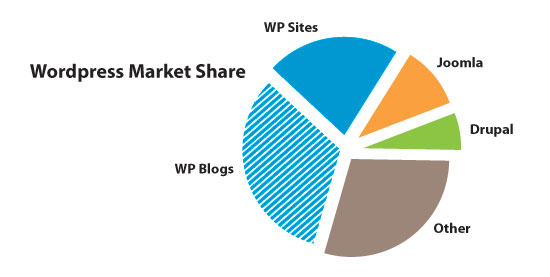 Estimated market share of blogs and websites running on WordPress.

Going strictly by numbers, WordPress is more of a blogging platform than Joomla or Drupal are straight CMS’ — meaning that more WordPress blogs are out there than there are Joomla and Drupal websites combined.

I mention this because some people insist that WordPress is not just blogging software. But for 87,000 popular websites, it is. Getting defensive about it would be silly. It would be like Apple saying that the iPhone isn’t a phone. It is a phone, even if it can be more than one.

And yet WordPress is also a CMS. Remember that 58,000 websites in the top 1 million are not blogs or news websites but are powered by WordPress. This means that, as a CMS, WordPress is 3.4 times as popular as Drupal, which means that anyone who says that WordPress isn’t a “real” CMS is smoking something strong.

WordPress’ pedigree as blogging software is a key part of its success as a CMS, for the following reasons:

I’m not saying whether this was by luck or by plan, but if your goal 10 years ago was to create a technology that would be used on as many websites in the world as possible, and you approached it with the mindset that the Internet is about content, then you’d probably design the software around writers who are interested in the Internet.

If your goal 10 years ago was to create a Web technology that would “take over the world,” you might try to get your technology used by as many of the most influential technology-related websites as you could.

If your goal today was to build a technology based on the single most enduring theme in Web design of the past 15 years, that principle would probably be “Content is king.” Savvy PR and marketing firms the world over are trying to figure out how to make their clients premier sources of information.

All that being said, I can appreciate why the WordPress community is trying to put less emphasis on its blogging pedigree. But a stronger message about WordPress is out there, which is that other CMS’ focus on the system, while WordPress is all about the content.

What this all boils down to is that content management systems perform a job for us, which is to manage content. Drupal does this. Joomla does this. WordPress does this. Judging by the market share of CMS’, WordPress just happens to do this very well and more often. WordPress undeniably runs more websites out there than any other competitors on the block.

But I also meant it earlier when I said that, in most cases, any of the top three (or even the top 20) CMS’ out there will do the job admirably well. Picking one CMS over another is usually determined more by the IT department’s personal preference or by the core competency of the firm you are working with or by the platform of choice for peers in your industry.

This is a case study, and it shows that users will choose the tool that best solves their problem and gets the job done. In this case, users are developers and content creators, and when they need to get things done, they want the tool that is right for the job, that is easiest to use and that gives them the best experience.