Robert Hoekman Jr is the author of Experience Required: How to Become a UX Leader Regardless of Your Role (New Riders), and several other renowned books on user … More about Robert ↬

If you’re reading this, odds are that you’re a Jane. You are a tech-savvy, confident user who jams those buttons down like there’s no tomorrow, fearlessly marching your way through whatever task stands in your way. Robert explains why that’s likely the case with the help of a quick tale of two users.

When this acquaintance of mine arrived at the subject of a particularly hairy task flow, he said, “Well, these aren’t going to be very savvy users, so we should probably put some instructions there.” He followed this by rattling off some dry, slightly too formal line intended to clear up any confusion about the page. 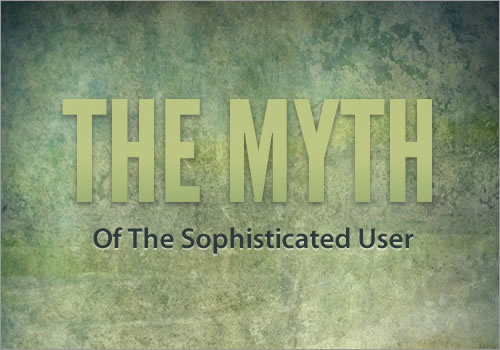 It was an act that reflected his apparent belief that some savvier type of user is out there who would immediately understand the screen and could live without the instructive text. I cringed. I’ve heard the same suggestion on far too many phone calls, and it’s been wrong every time. To shed light on my reaction to it and to illustrate why such a suggestion is problematic, let’s consider a quick tale of two users.

A Tale Of Two Users

First up is the type of user who my acquaintance thought he was trying to help. Let’s call him John.

John is a guy with little experience using the Web beyond the typical. He pays a few bills, Facebooks a few friends, buys the occasional bauble, but he has found himself having to use this fancy new internal Web app as part of his job, the one designed by the person in my co-working area.

At the next desk over is Jane, a tech-savvy user who spends nine hours a day doing one thing or another on a variety of screens — her laptop, her phone, her tablet — and whose hobby is loading up on as many apps as she can find. She’s never met a problem the Internet couldn’t solve. She has chops, and she loves to use them.

When John approaches this complicated Web app, he knows a couple of things: that he has to learn to use the thing in order to do his job, and that he often struggles to understand the complicated interfaces that seem to come at him from every direction these days. He’s not excited about having to cope with this one, too.

Jane, on the other hand, is a “producer.” She gets things done, and she pushes this app’s buttons without hesitation. The list in her to-do app has a hundred things on it, and doing work on this app is just one of a slew of tasks whose ass she’ll kick before even heading out for lunch.

John and Jane both see the same screen, but they see different things there. Their understanding and familiarity with it are not the same; their confidence in conquering it is at different levels; and different psychological factors are at play when they interact with it. For John, the pressure is in figuring out how to do this part of his job so that he can get back to nervously doing the others. For Jane, the pressure is in cranking through this so that she can devour the next item on her list.

So, which user was my acquaintance helping by adding instructions to the page? In truth, the answer is probably neither.

The only reason a line of instruction would help John is because the screen was designed for Jane, whose vast experience helps her decipher the purpose, benefit and flow of this task. And that’s exactly the problem. Jane, though perhaps more likely to work her way through the screen with some success, has better things to do than struggle with it. She may have more technological experience, but she’s in a hurry. Besides, a poorly designed screen can make Jane feel as much of a moron as John feels. Her experience means nothing against a screen that wholly fails to explain itself.

John is less likely to recognize design patterns or to be able to parlay his previous experiences to this one. Jane is more likely to recognize patterns, but only if they’re used in ways she’s familiar with or can quickly adapt to (although weak designs are weak usually because established design patterns have been misused). John’s lack of confidence pitted against a tough design might kill his desire to ever work with it again. And Jane, despite being ready and willing to fight through it, will not be any more loyal after the battle.

In short, Jane is just as likely as John to walk away from this screen frustrated. And no line of instruction will compensate for a bad design.

Despite hearing it all the time from designers and executives alike, the notion that tech-savvy users will be more amenable to difficult interfaces is, in a word, crazy. Yes, some users, when asked, would prioritize user control over ease of use (and vice versa: unconfident users would prioritize ease of use over control), but does this mean that the tech-addicted among us will more readily understand an unclear message, tolerate a poor task flow, or swear by a product that they themselves have trouble using? Heck no. Complexity can be managed, control can be beneficial, but frustration is never a good business strategy.

It doesn’t matter how savvy your users are, better design benefits everyone. Having a proficient audience is no excuse to slack off. You’re still designing for human beings, and human beings, one and all, have better things to do than try to make sense of a weak design.

If you’re reading this, odds are that you’re a Jane. You are a tech-savvy, confident user who jams those buttons down like there’s no tomorrow, fearlessly marching your way through whatever task stands in your way.

The next time you’re designing for John, remember that you’re also designing for the Janes of the world, too. Their to-do lists will be the better for it.