Siobhan McKeown is the author of A Life Lived Remotely: Being and Work in the Digital Age and COO of Human Made, a global enterprise WordPress agency and the … More about Siobhan ↬

2011 was a great year for WordPress, with some excellent new updates that saw the introduction of a drag-and-drop uploader, distraction-free writing, the HTML5 Twenty Eleven theme, and movement towards a fully responsive dashboard. As well as changes to WordPress core, theme development continued to evolve, as whispers of responsive design spread like wildfire across the WordPress community.

This special is the first in our series of Smashing Specials — extended articles and studies dedicated to a specific topic. The special features current WordPress theme trends for 2012, covering past trends, new developments in theme design and trends in the theme development.

2011 was a great year for WordPress, with some excellent new updates that saw the introduction of a drag-and-drop uploader, distraction-free writing, the HTML5 Twenty Eleven theme, and movement towards a fully responsive dashboard. As well as changes to WordPress core, theme development continued to evolve, as whispers of responsive design spread like wildfire across the WordPress community. 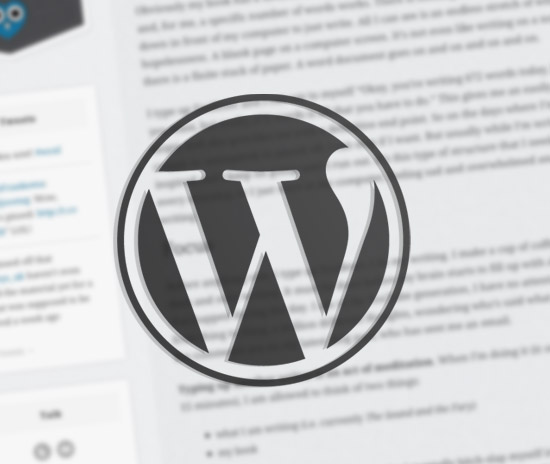 Over the next year, some recent developments will become standards. Others, now just remote flickerings in the eyes of a few theme designers and developers, will start to take hold. Now that 2012 has properly started, let’s look at some trends that have emerged and are emerging.

Due to the length of this special, it was split into three parts:

When thinking about future trends, it’s fun to look back and see what people predicted before to see whether any of their predictions came to fruition. Thankfully, with the power of Internet, combined with Ian Stewart’s “Future of WordPress Themes” posts (as well as WPCandy), doing this is very easy.

So, just what were people predicting when WordPress was growing up?

The Demise of the WordPress Premium Theme Market

At the start of 2008, when creating a premium WordPress theme was frowned upon, Ian Stewart wrote this in a post:

It’s prediction time: The premium WordPress theme phenomenon has approximately one year left before collapsing entirely, leaving a rather large hole between completely free WordPress themes and custom themes $1500 and up. If you’ve got a “premium” WordPress theme waiting in the wings, I advise releasing it sooner rather than later. As in, now.

We don’t really need to add a comment to that one.

“Cluttered and Pimped Out”

Here’s what Robert Ellis said about the future of WordPress themes in 2008:

The vast majority of themes will still be garish mutations of Kubrick, but more cluttered, more pimped out with widgets, scripts and effects. There will still be premium themes that push the envelope in terms of built-in options and quality, but the market will become saturated, setting off even more accusations of copying (as we’ve seen with magazine themes; though personally, I think most of them look like they were “inspired” by CNN).

This was more on the money, and we have seen amateur designers cram in a lot of different scripts and effects. This has diminished over time. Hopefully, our direction now is more Zen.

I do hear some talk of moving into designs for specific niches, so theme developers could cater to particular users. I think this is a great idea, which could be a nice trend as we’ve seen with magazine-styled themes. Users want something that works for them before unwrapping the packaging.

Justin was definitely prescient then, as niche themes became more popular in 2011. And we’ll see much more of them in 2012.

In 2009, themes that allowed you to customize the layout and design started to appear. Here’s what Dougal Campbell had to say:

The main change I see happening here is with themes which provide some sort of customizing feature on the back end which lets you choose options like: header graphics; one, two or three sidebars, along with their positions; color schemes; They will also be pre-bundled with several plugins which allow you to pull in your content from other sources such as Twitter, Facebook, Flickr, etc. These kinds of themes already exist, but I think we’ll see the ease of customization rise to a new level.

By 2012, this trend towards adding options and customizations reached its zenith, and it will hopefully decline over the coming year.

Want to have fun reading past WordPress theme predictions. Check them out here:

A Trip Down Memory Lane

Let’s look at how theme design has changed over the past few years.

Below are the most popular themes downloaded from the WordPress theme directory since 2009 (thanks to Otto for getting this information). You can see how WordPress themes have moved away from looking like blogs to a more professional appearance. 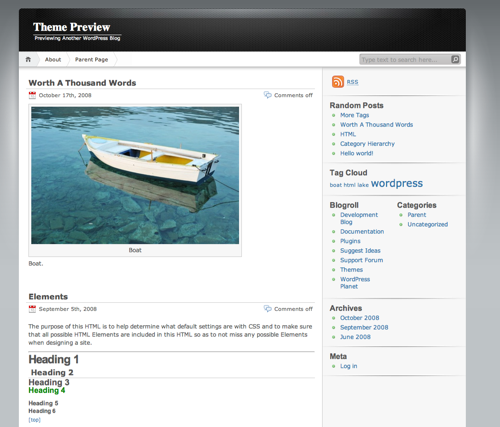 iNove was the most popular theme in 2009, followed by Atahualpa and then Pixeled. 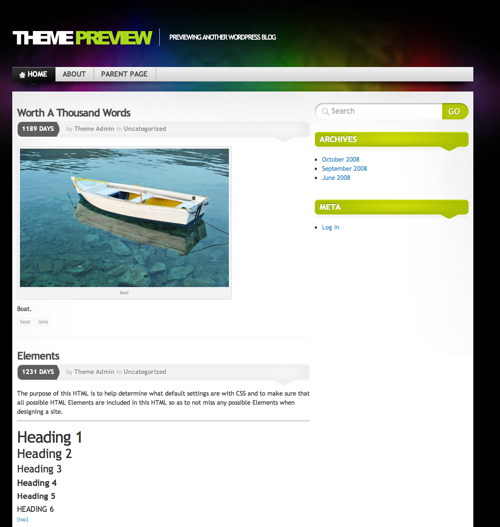 Mystique was the most popular theme in 2010, followed by Atahualpa and then TwentyTen. 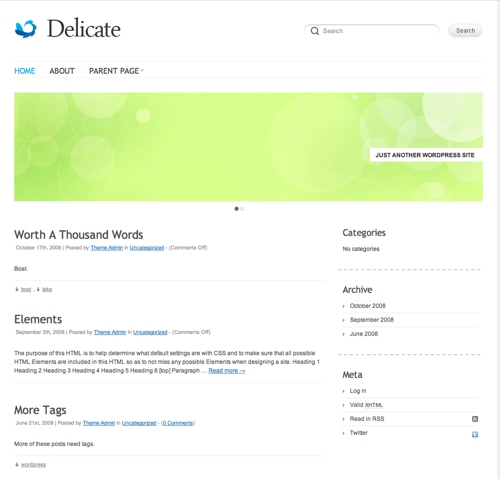 Delicate was the most popular theme in 2011, followed by TwentyEleven and then Platform.

The Most Popular Themes in the Forest

To see how things have fared on the commercial theme front, we scoured the archive of ThemeForest. Below are the best-selling themes from the last quarter of each year.

Here were the top themes: 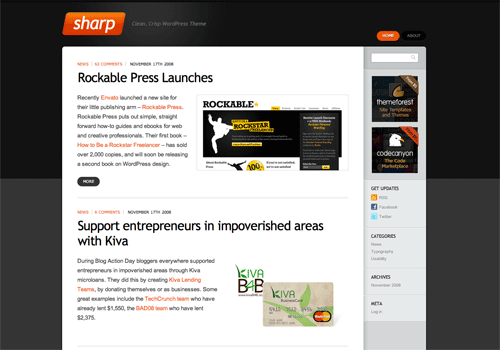 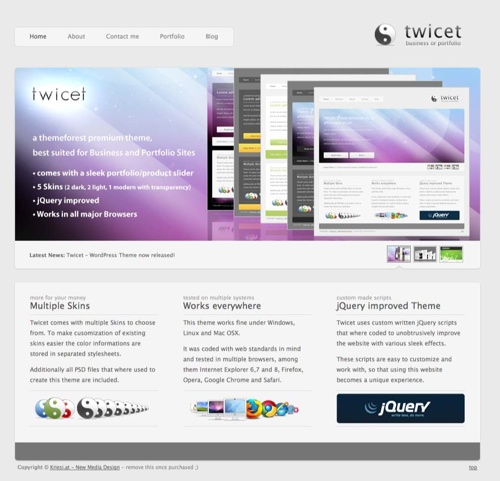 Twicet topped downloads for the last quarter of 2009. 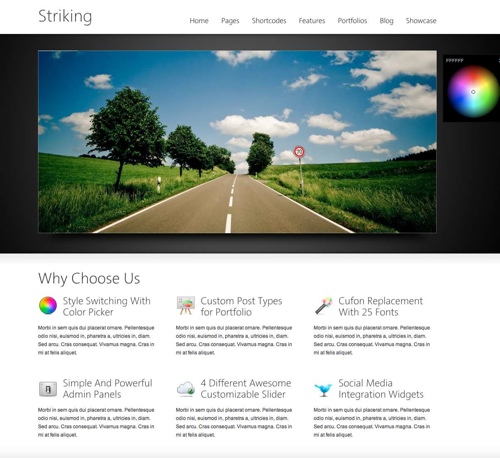 Striking was the most popular theme in the last quarter of 2010. 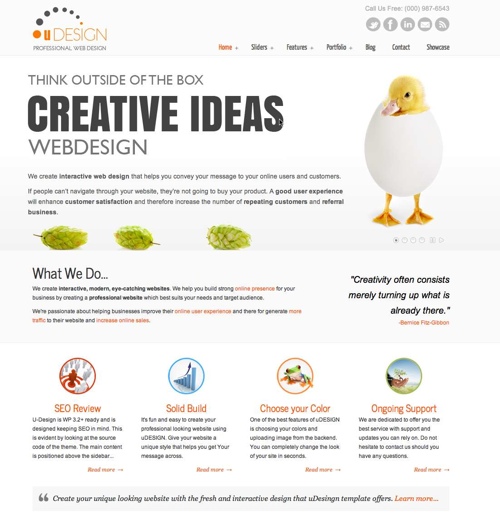 The multi-optioned uDesign was the most downloaded theme in the last quarter of 2011.

Before getting to our predictions for what will take hold in WordPress themes this year, let’s quickly look at what has happened over the past year:

Now we’ve got the past out of the way, let’s look at the future!

Due to the length of the series, it was split into three parts: