I don’t think anyone can deny that the Web has changed the way people teach, learn, and do research. Of course, this doesn’t mean that everything we read online is true and accurate—far from it.

I don’t think anyone can deny that the Web has changed the way people teach, learn, and do research. Of course, this doesn’t mean that everything we read online is true and accurate—far from it. But I believe that through honest discussion and objective collaboration, accurate and useful information is much more likely to be the end result of any educational endeavor.

In the final week of November 2011, a smart group of developers launched a project called Move The Web Forward, which you can read more about in Addy Osmani’s Smashing Magazine article.

For this post, I want to focus on one piece of advice given by those developers in that project, under the heading “Write”.

The advice is: Publish what you learn.

As soon as I read that exhortation (which originated with this tweet), I knew this was a project made by a group of people who cared about the Web and that they understand what it takes to move forward as developers, and as an industry.

Let’s explore those four simple words, because I believe that concept is at the heart of how much progress has been made in the front-end development niche. And it’s something that could help almost any industry, in any field.

Very few blogs start out with much traffic at all. Unless the blog is based on an already existing brand that has a lot of exposure, most blogs will begin with very few readers. Even Smashing Magazine, who now has millions of readers, subscribers, and followers, started out with nothing.

CSS-Tricks is another good example of a blog that started out as nothing, and has grown into a thriving, collaborative community. Its founder and curator, Chris Coyier, certainly couldn’t have predicted how much that website would grow. And I’m sure we could come up with additional examples of websites that went from zero to hero in a relatively short time.

Why did they become successful? Because they published what they learned. At one time I somewhat favored the view that too many blogs were being launched. But I think the benefits of so much being published in so many different places outweigh any drawbacks.

Of course, this is not to suggest that the reason you want to publish your thoughts is to “make it big”—that should be secondary, if considered at all. In fact, what you publish doesn’t necessarily have to be on a run-of-the-mill monetized WordPress blog. It could be a GitHub account, a Wiki-style website, a Tumblr feed, or even a bunch of quick tips on a simple Twitter account.

Which brings us to another important supplement to this theme. Immediately after the folks at Move The Web Forward told us to publish what we learn, they made an equally important statement.

Don’t Be Afraid To Make Mistakes

You might be thinking: “Wait. What? Me? Publish a blog? I’ve been coding websites for a measly six months (or some other ostensibly short period of time). Even if people visit my website and read it, my articles will probably get torn to shreds!”

That doesn’t matter. What’s important is that you recognize the value in researching, teaching, collaborating, and correcting mistakes. That’s why the Move The Web Forward folks went on to encourage writers to “keep your posts updated.”

And that’s why Rebecca Murphey, when discussing how to get better at writing JavaScript, said:

In this case, Rebecca was talking about actually writing code, not writing about code. But the same principle applies: you will get better when you make mistakes and correct them.

And if you think you’ve made some progress and you have something unique and educational to share, don’t be afraid to offer it to one of the many design and development blogs that will gladly pay you for content.

There are too many websites that view the readers’ comments as secondary content that is not nearly as valuable as what the author has to say in the main article. Every website should continually make changes or updates to content that is clearly shown to be incorrect. This shows that the publisher wants to provide accurate information, and that they respect the views of their readers.

In fact, you could make the argument that without reader comments, the quality of content on many design and development blogs would not be as strong as it is today. On my own website, I’ve written so many things that were just downright wrong. In some cases, things can be a matter of opinion and personal preference. But in other cases, they’re just factually incorrect. In indisputable cases, I’ve always tried to post updates to articles and credit the commenters who pointed them out.

Randy Rhoads, a popular rock guitarist (who died in a plane crash in 1982), was well-known for being a guitar teacher. He once said:

“I’ve been playing about 18 years and I started to get a style when I started teaching.”

In other words, he believed that his success as a guitarist was largely impacted by the fact that he spent time teaching his skill to others. The same can be true for any one of us.

I’ve learned so much from readers’ comments and from doing research on stuff that I plan to publish. I’ve even learned from content I never actually did publish. The Move The Web Forward project, once again, summarizes this point quite nicely:

“Teaching is a great learning tool as well. So, even if you are getting started in an area, you’re helping yourself by writing about it as well.”

GitHub Gets It Right

The collaboration level on many projects from the “social coding” website GitHub is truly amazing, and is something that shows how revolutionary the Web really is.

Think about a large project like HTML5 Boilerplate. When that project was first released, many front-end devs were amazed at how much front-end knowledge had been packed into a single starting template. Many were even intimidated by it. But what it was when it first launched is nothing compared to what it is today.

Why? Because from the get-go the contributors to the project had the same attitude that Paul Irish expressed in the launch post of his blog:

“I’m very interested in your contributions… what else deserves to be in this base template?”

With those words, Paul began what might be the most important front-end development project in the Web’s short history. And the collaboration continues today. In fact, there have been over 1000 issues opened and closed on that repo. All because Paul Irish—who has every right to never solicit feedback, because he’s so dang smart—encouraged collaboration.

The collaboration on apps like GitHub should be exactly what happens on blog posts. The readers posting comments should read the entire article, and should offer constructive, polite criticism and suggestions, without any unnecessary negativity. 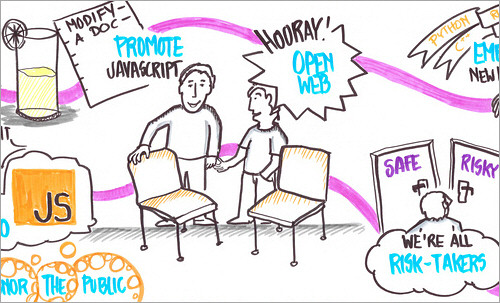 If the author feels the advice is not accurate or best practice, than he should explain why. If it’s established that the point needs clarification and/or correction, then he should humbly accept this and post an update, crediting the person or persons that brought it up. Personally, I’ve seen too many posts where the author doesn’t make corrections, even when clear technical or factual errors are pointed out.

This doesn’t mean that “majority rules”—that would be ridiculous, and would probably cause more problems than it solves (particularly in matters of opinion, where often there are no hard-and-fast rules).

But if it’s a technical matter, then the author has the responsibility to make updates and keep the information fresh, practical, and relevant. This is especially important if readers are finding the article via search. The “copy-and-paste-but-don’t-read” mentality is common among developers looking for quick solutions. We all face tight budgets and even tighter deadlines, so the last thing we want to do is verify a piece of code’s quality by reading a 900-word accompanying article along with 50+ comments.

If you notice a lot of search traffic coming in for older articles on your website, that might very well be incentive to update those older posts, and ensure you’re not promoting something that you no longer believe is accurate or best practice. And this has a twofold benefit: It will get you even more traffic, and your readers will have accurate information that they can trust.

So let’s do our best to imitate collaborative communities like those found on GitHub and StackOverflow, and continue making progress by correcting our errors. This will help all of us overcome the fears inherent in publishing what we learn.

If you don’t read this entire post, or if you take nothing else away from it, then just remember these points:

I think this is a winning strategy for all those who are involved in design or development blogging, as well as tutorial writing.

When we’re willing to put ourselves out there, listen to what our peers have to say, and improve as needed, we will become better developers, and will help each other solve design and development problems in a more effective manner.

As this article suggests, your voice is just as important in this discussion. What do you think? Are you motivated to publish what you learn? Do you think collaboration and constructive feedback is an important part of moving the Web forward? We’d love to hear your thoughts.