Chen Blume is a graphic and interactive designer. She co-founded Specctr with Dmitriy Fabrikant. Together they aim to bridge the communication gap between … More about Chen ↬

There is an aspect to Web design that no one likes to talk about: spec’ing. We all do it, we all hate it, but we also understand that specs are vital to both designers and developers.

There is an aspect to Web design that no one likes to talk about: spec’ing. We all do it, we all hate it, but we also understand that specs are vital to both designers and developers.

For those who aren’t familiar with the term in this context, “specs” is short for specifications — in the case of design, they are instructions that specify colors, fonts, sizes, spacing and so on, just like a blueprint. Specs are a crucial part of the design and development process for companies with big teams and for small companies that have to outsource some of their development. Specs function not only as instructions to developers, but also as a reference point to make sure the whole team is on the same page.

However, the process of producing specs is repetitive and time-consuming, especially for creatives. But now this can all change: Specctr, together with Adobe Fireworks, offers a quick and easy way to generate this important information automatically. 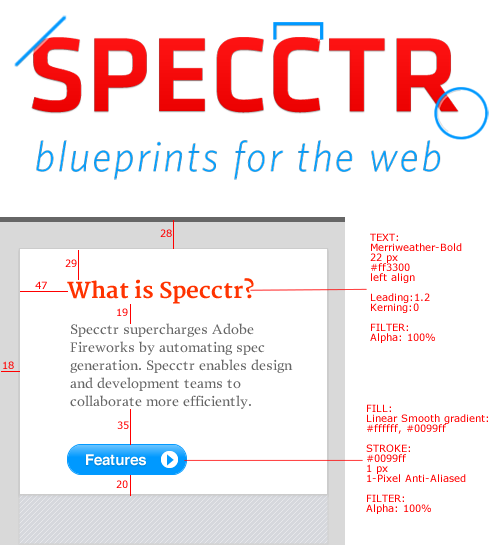 My idea to make Specctr came from my personal experience working on a design team at a large corporation. Spec’ing was part of my routine. One day, after hours of spec’ing, my eyes hurt and I was bored and frustrated. Suddenly, I realized that this kind of intensive work should be automated, and that a designer’s time is much better spent designing rather than spec’ing.

Specctr is more than a tool: it is a business solution for any company whose designers must generate specs for developers. Specctr facilitates this communication and leaves designers and developers happier and more productive. Making this process quicker frees up the business to focus more intently on its core mission. 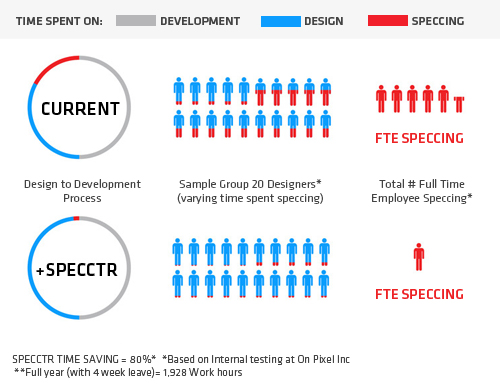 In the process of creating Specctr, I brought my design background and practical experience in spec’ing to bear on the issues and opportunities in automating the process. Meanwhile, my colleague, Dmitriy Fabrikant, engineered the software from the ground up. Working in tandem at On Pixel, we released Specctr Pro in January 2012. Since then, it has received many favorable reviews.

In addition to the commercial version of the tool, we’re happy to release a free version called Specctr Lite as a contribution to the community. We chose to highlight width and height as well as text spec’ing abilities, because they are most common to a designer’s workflow. These two feature sets alone will save a lot of valuable time.

Specctr Lite can be downloaded for free from our website, and we’re happy to say that it was created and released as a result of the involvement of Smashing Magazine! 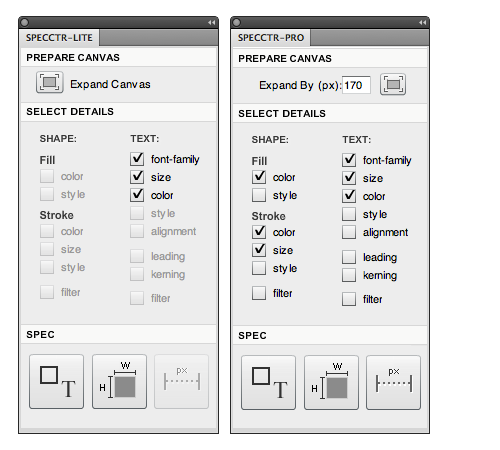 Pro and Lite: a quick comparison

The Lite version is as easy to use as the Pro version, and its features work the same way.

To use Specctr (Pro or Lite), you need:

The installation process is pretty straightforward:

Please note: If you are using Windows Vista or 7, you might need to launch the Adobe Extension Manager as Administrator, otherwise the extension could fail to install.

If you still have questions, don’t hesitate to consult our online tutorial (PDF, 1.9 MB) or contact us directly!

Once you install Specctr through the Adobe Extension Manager, restart Fireworks, and then open Specctr from the Window menu. Now that Specctr is open, you can spec a document in a few easy steps.

First, prepare your document by making room for your specs. Select the size of your design’s border, and click on the “Expand Canvas” button.

Select which details to display by toggling them on or off from the panel’s menu.

Now Specctr Pro will automatically display your spec with a click of the button.

To spec a shape (shape, line, dot, etc.) or a text object, select the object (or multiple objects), and click on the “Spec Object” button. The specs will be outputted to the nearest edge of the canvas. 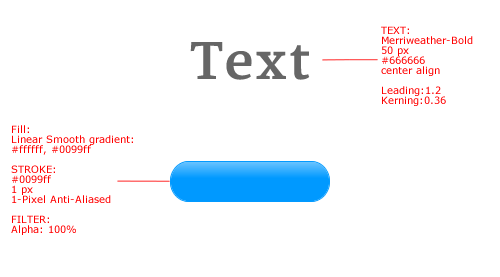 Properties of objects in a spec

You can also spec the spacing between two objects by selecting them and then clicking the “Spacing” button. If you select only one object, Specctr will measure the object’s distance to the edges of the canvas.

Measuring the space between objects

Finally, you can also spec the width and height of any object.

The process of developing Fireworks extensions consists of the following steps:

Because the development process is spread over three separate environments, integrating the different pieces of the application and debugging the application present some challenges. But in the end, it’s well worth the positive response from our users.

In the next couple of weeks, Dmitriy will release on GitHub a few ActionScript libraries that he has built during the process of developing Specctr. These libraries will hopefully reduce some of the pain points of the tiered development process. We might also write another article that highlights in more detail the development process for building a Fireworks extension.

One of Fireworks’ strengths is its potential as a development platform that leverages the creativity and innovation of its community. We would love to help this process and show that Fireworks is a powerful tool for Web design.