Ben Gremillion is a Writer at ZURB. He started his career in newspaper and magazine design, saw a digital future, and learned HTML in short order. He writes … More about Ben ↬

The trouble with a color’s name is that it never really is perceived as the exact same color to two different individuals — especially if they have a stake in a website’s emotional impact. Name a color, and you’re most likely to give a misleading impression. Even something like “blue” is uncertain. To be more precise, it could be “sky blue”, “ocean blue”, “jeans blue” or even “arc welder blue”.

The trouble with a color’s name is that it never really is perceived as the exact same color to two different individuals — especially if they have a stake in a website’s emotional impact. Name a color, and you’re most likely to give a misleading impression. Even something like “blue” is uncertain. To be more precise, it could be “sky blue”, “ocean blue”, “jeans blue” or even “arc welder blue”.

Descriptions vary with personal taste and in context with other colors. We label them “indigo”, “jade”, “olive”, “tangerine”, “scarlet” or “cabaret”. What exactly is “electric lime”? Names and precise shades vary — unless you’re a computer.

When computers name a color, they use a so-called hexadecimal code that most humans gloss over: 24-bit colors. That is, 16,777,216 unique combinations of exactly six characters made from ten numerals and six letters — preceded by a hash mark. Like any computer language, there’s a logical system at play. Designers who understand how hex colors work can treat them as tools rather than mysteries.

Pixels on back-lit screens are dark until lit by combinations of red, green, and blue. Hex numbers represent these combinations with a concise code. That code is easily broken. To make sense of #970515, we need to look at its structure:

The first character # declares that this “is a hex number.” The other six are really three sets of pairs: 0–9 and a–f. Each pair controls one primary additive color.

The higher the numbers are, the brighter each primary color is. In the example above, 97 overwhelms the red color, 05 the green color and 15 the blue color.

Each pair can only hold two characters, but #999999 is only medium gray. To reach colors brighter than 99 with only two characters, each of the hex numbers use letters to represent 10–16. A, B, C, D, E, and F after 0–9 makes an even 16, not unlike jacks, queens, kings and aces in cards. 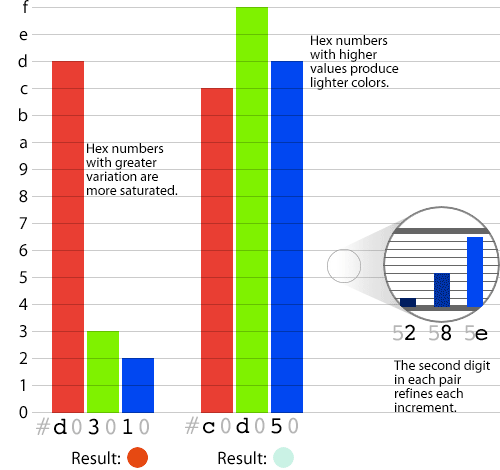 Being mathematical, computer-friendly codes, hex numbers are strings full of patterns. For example, because 00 is a lack of primary and ff is the primary at full strength, #000000 is black (no primaries) and #ffffff is white (all primaries). We can build on these to find additive and subtractive colors. Starting with black, change each pair to ff:

Subtractive colors start with white, i.e. with the help of #ffffff. To find subtractive primaries, change each pair to 00: 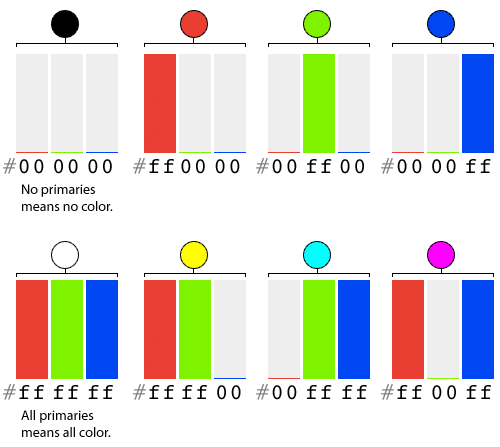 Hex numbers that use only three characters, such as #fae, imply that each ones place should match the sixteens place. Thus #fae expands to #ffaaee and #09b really means #0099bb. These shorthand codes provides brevity in code.

The example above has enough difference among its sixteens place to make the color easy to guess — lots of red, some blue, no green. This would provide us with a warm violet color. Tens in the second example (9, 9 and 8) are very similar. To judge this color, we need to examine the ones (7, 0, and 5). The closer a hex color’s sixteens places are, the more neutral (i.e. less saturated) it will be.

Make Hexadecimals Work For You

To brighten or darken a color, one’s inclination is often to adjust its brightness. This makes a color run the gamut from murky to brilliant, but loses its character on either end of the scale. For example, below a middle green becomes decidedly black when reduced to 20% brightness. Raised to 100%, the once-neutral green gains vibrancy.

A funny thing happens when we treat hex colors as if they were increments of ten. By adding one to each of the left-hand character of each pair, we raise a color’s brightness while lowering its saturation. This prevents shades of a given color from wandering too closely to pitch black or brilliant neon. Altering hex pairs retains the essence of a color. 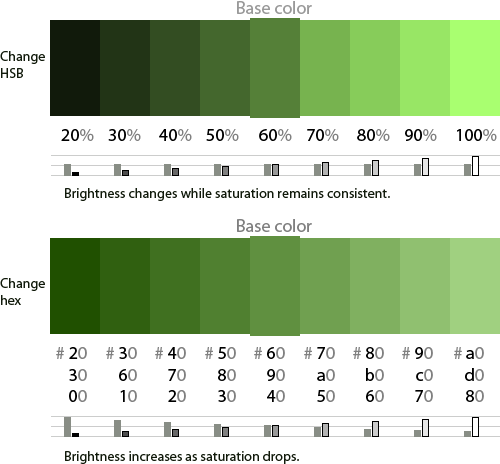 In the example above, the top set of shades appears to gain yellow or fall to black, even though it’s technically the same green hue. By changing its hex pairs, the second set appears to keep more natural shades.

By default, browsers underline text to denote links. But thick underlines interfere with letters’ descenders. Designers can make underlines less obtrusive by scaling back hex colors. The idea is to make the tags closer to the background color, while the text itself gains contrast against the background.

To make this work, every embedded link needs a <span> inside of every <a>: 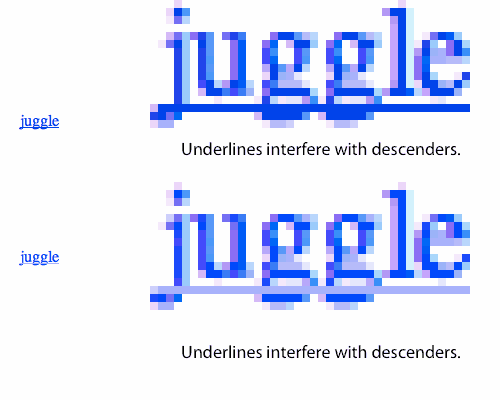 As you can see here, underlines in the same color as the text can interfere with parts of type that drop below the baseline. Changing the underline to resemble the background more closely makes descenders easier to read, even though most browsers place underlines above the letterforms.

Adding spans to every anchor tag can be problematic. A popular alternative is to remove underlines and add border-bottom:

A recurring design problem is that a specific color may be technically correct but has an unintended effect. For example, some designs call for headers and body copy to be the same color. We have to keep in mind that the thicker the strokes of large text appears, the darker the small text appears.

While technically identical, the body of the copy is narrower, and more delicate letterforms make it visually brighter than the heading. Lowering the sixteens places will make the text easier to read.

How To Warm Up Or Cool Down A Background

Neutral backgrounds may be easy to read against, but “neutral” doesn’t have to mean “bland”. Adjusting the first and last byte can make a background subtly warmer or cooler.

Is that too much? For a more subtle shift, use the ones places instead:

Recognizing the structure of a hex number’s number/letter pairs gives designers a unique tool to explore color combinations. Unlike color wheels and charts, rearranging pairs in a hex number is a simple process to change hues while keeping values similar. As a bonus, the results can be unpredictable. The simplest technique is to move one pair of characters to a different spot, which trades primary colors.

A common design technique to make text or other visual elements coordinate with a photo is to use colors from within that photo. Understanding hex colors can take that a step further, by deriving new colors that coordinate with the photo without taking directly from the photo. 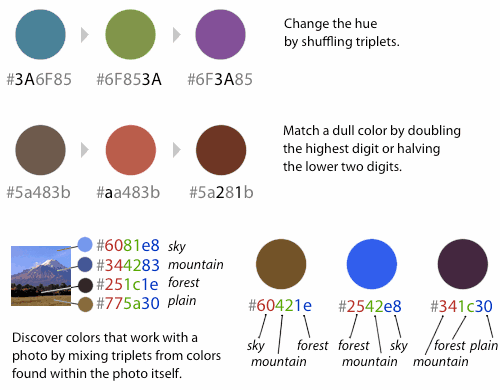 Don’t let the code intimidate you. With a little creativity, hex colors are a tool at your disposal. If nothing else, next time someone asks if you can solve a problem with code in any language, you can simply say:

“Shouldn’t be harder than parsing hexadecimal triplets in my head.”

You may be interested in the following tools and apps: