David Bushell is a website designer and front-end developer working at Browser Creative, London. He blogs regularly at dbushell.com and xheight, and shares … More about David ↬

The varying viewports that our websites encounter on a daily basis continue to demand more from responsive design. Not only must we continue to tackle the issues of content choreography — the art of maintaining order and context throughout the chaotic ebb and flow of the Web browser — but we must also meet the expectations of users.

The varying viewports that our websites encounter on a daily basis continue to demand more from responsive design. Not only must we continue to tackle the issues of content choreography — the art of maintaining order and context throughout the chaotic ebb and flow of the Web browser — but we must also meet the expectations of users. They’re not sitting still.

With the likes of Firefox OS (Boot to Gecko), Chrome OS and now Ubuntu for phones — an OS that makes “Web apps” first-class citizens — delivering native app-like experiences on the Web may become a necessity if users begin to expect it. Many in our field have argued for a degree of separation between the Web and native platforms for both technical and philosophical reasons. They’re certainly wise to heed caution, but as consumer devices continue to blur the boundaries, it’s worth thinking about what we can learn from native app design.

In this article, I’ll be walking through a build demo that centers on two topics. The first is responsive design patterns that embrace the viewport and that improve content discoverability beyond the basic hyperlink; in this case, off-canvas navigation. The second is the complexities of implementing such ideas in an accessible and highly performant manner. These are two topics that I believe are at the heart of the Web’s future.

With that in mind, let’s get building.

All good things begin with a solid foundation of semantic HTML and widely supported CSS. In theory, this baseline should function as a usable experience for all browsers that visit our website. (It might also be the final experience in less-capable browsers.)

As a starting point, I’ll use a technique very similar to Aaron Gustafson’s Smart Mobile Navigation Without Hacks. It requires no JavaScript to function. 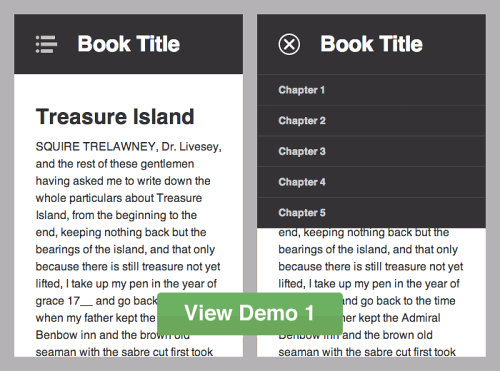 The HTML body looks like this (I’ve stripped a few attributes for semantic clarity):

You could consider the HTML alone, with little to no styling, as being “breakpoint zero.” If it’s not logical at this stage, then accessibility will not improve.

As the demo takes shape, I’ll continue to introduce the main development principles. There’s a long way to go yet…

For some websites, the above may suffice — but not for us! We’re experimenting with off-canvas patterns and striving for that native experience. Because we cannot ignore older browsers, it’s now time to progressively enhance. 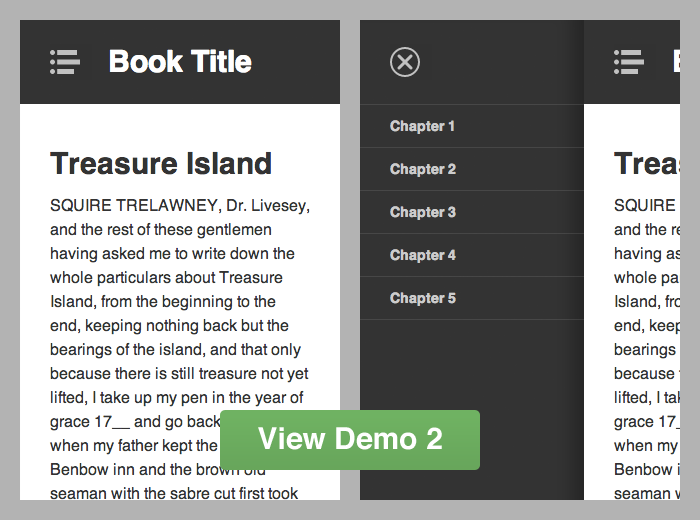 This is a fairly basic enhancement, but importantly it remains usable before JavaScript is ready. It’s also notable that no inline styles are written with JavaScript; only classes are used to manage states.

Jumping between open and closed navigation states makes for a jarring user experience. Users need to understand — or even see — how an interface has changed. This is often the point where developers let the Web down. To be fair, building user interfaces is incredibly difficult. What I’m going to show below is far from perfect, but it’s certainly a step in the right direction.

So, we have the set-up. Now let’s add transitions.

I’ll start by getting it all wrong, because this is how I would have done it a few years ago, and learning from mistakes is important.

jQuery is a resource that many front-end developers begin with to learn JavaScript. Personally, I am a big fan (never blame the tools), but unfortunately jQuery has a habit of making things look deceptively simple. It masks complexity and, with that, understanding.

Transitioning our off-canvas navigation with jQuery is very easy:

Visually, this achieves the effect we’re after, but test it on mobile and watch the frame rate stutter. Performance is dreadful.

This method is bad for several reasons:

Overall, it’s a performance and maintainability nightmare. There is a better way.

Putting the jQuery experiment aside, I’m now building from the second demo again, this time using CSS transforms and transitions. These enable us to smoothly animate the off-canvas navigation with great performance.

With the help of Modernizr, this will fall back to demo 2 if browser support is lacking for CSS transforms and transitions. (In theory, I could fall back to jQuery animation, but it’s really not worth it.) When you download Modernizr, you can include only the feature detection that you need. It also includes the HTML5 shiv for IE. All in all, it’s a very useful script.

The benefits here are immense. First and foremost, by transitioning elements with 3-D transforms, the browser can generate render layers that are hardware-accelerated. Secondly, there’s no need for JavaScript to worry about style or media-query breakpoints. JavaScript need only interpret user interaction and apply classes to maintain states — CSS defines the visual changes.

We can look deeper into performance by using Chrome’s Developer Tools. The results below are from the desktop browser, but for mobile performance you could use USB Remote Debugging on Android devices.

The four events above represent the opening and closing of the navigation twice. In the diagram, yellow represents the JavaScript running, purple is the rendering (recalculating the style and layout), and green is the painting to the screen. On mobile, we’d be shooting way below that 30 FPS line. I also tested on an iPhone 3GS and could literally count 3 FPS with my own eyes — it’s that slow!

What a difference! The only JavaScript that exists is there to manage user interaction before and after the transition. The green we’re seeing is the minimum that the browser needs to repaint the transition at a respectable frame rate, using GPU acceleration.

As with all new Web standards, nothing is inherently perfect.

In WebKit-based browsers, the font smoothing may switch to antialiased from the default subpixel-antialiased when CSS transforms or transitions are applied. This could result in visually thinner text, which many designers actually prefer — but not something you should “fix.”

Flickering can also occur if an element goes between transform and no-transform. To avoid this, always start with a default like translate3d(0,0,0) on an element that will move later, so that the render layer is composed and ready.

Enhancing further, we could detect and take advantage of touch gestures, like swiping, to really bring this implementation closer to par with its native counterparts — “closer” being the operative word, but I do believe the gap is closer than many would have us believe.

It’s also — in my opinion — a gap that we need to bridge.

There are other clever ways to increase interaction speed. Mobile browsers tend to wait around 300 ms to fire click events.

Transition easing can radically change the visual effect and the user’s perception of what’s happening. Whether elements need to spring, bounce or accelerate into action, Lea Verou has a useful cubic bezier resource to generate custom easing functions.

Hopefully, this article has shown the improvements that can be made if we take extra care to understand the technology we’re using.

So, there we have it: a three-tiered responsive, interactive, off-canvas menu. I’ve set up a GitHub repository where you can view all the code. Have a play with it; there are a few bits and pieces I haven’t covered to avoid bloating this article.

To really understand why the techniques highlighted above are my preferred solution, I point you in the direction of these resources: