Joshua Mauldin is a design leader and visual artist who got his start creating websites for bands. Since then, he’s designed 5-star mobile apps and built … More about Joshua ↬

With a solid foundation, the house is stable, and building on it is easy. With a solid grid, your design can easily be adapted to accommodate whatever changes come along. Today, we’ll share iOS Grid System, which I’ve been using when designing apps in Adobe Fireworks.

I’ll come right out and say it. I think the grid is the unsung hero of a good design. It gives structure and lets the design fall perfectly into place on the canvas. With a grid, adapting and building something new into your design is easy. Think of it like a house’s foundation. With a solid foundation, the house is stable, and building on it is easy. With a solid grid, your design can easily be adapted to accommodate whatever changes come along.

Today, we’ll share iOS Grid System, which I’ve been using when designing apps in Adobe Fireworks. The extension is free for both personal and commercial use, and it works with all iOS devices as of the beginning May 2013.

Installing and using the iOS grid extension in Fireworks is pretty easy. We’ll explain the process in detail, but you can jump to the download section and try the extension right away.

Why Are Grids Useful?

Before we continue, a bit about grids.

I like consistency. It helps me feel like I can trust whatever I’m using at the moment. At a deeper level, users appreciate consistency because it builds trust — trust that you aren’t going to pull the rug out from under them in the middle of whatever they’re doing. They know what they’re going to get, and they’ll be more comfortable with you if everything lines up just right, rather than if elements look like spaghetti thrown against a wall. In the end, consistency improves trust and credibility through better design quality, and it improves usability by making a website or application more understandable, predictable and findable.

As a designer, I like figuring out a system that makes updating easy for me. Grids help here because I don’t always have to worry about how a particular element should align with another; I’ve thought ahead and done that work already.

Learning about grids helps you put out better designs. Grids — specifically, how to apply them so that a design can be consistent and grow into itself — are an essential topic for designers.

Actually, they’re only essential if you want an interface that is:

Whether you work with clients or are on an internal team, grids are especially useful when those last-minute “Hey, can you just add this little button in somewhere? It’ll take only a second, I swear!” changes come in. Accommodating that request becomes much less trouble simply because a good grid is in place. Just pick the appropriate column (or columns), and boom — you’re done. Happy client, happy you!

I like what Khoi Vinh has to say about grids in this short (but great) interview:

“Khoi Vinh: On the Grid,” from The Color Machine

“The grid is a tool for me to impose order and logic and law. There’s a framework. If you remove all subjectivity, then you get some essential truth, some core idea that’s not clouded by inaccuracies or approximations or subjective feelings.”

Why Make An iOS Grid Extension For Adobe Fireworks?

The easy answer is that most of my designs these days are for iOS, and a grid system is essential to every design I craft. I start using it early on in the design process, and having a solid grid in place when I design makes sense for me.

I decided to build it after noticing how much time I spent making decisions that I could have easily automated. With this extension, I don’t have to spend time tediously clicking and dragging around to make sure my grid’s shapes and guides are pixel-perfect. This extension allows me spend more time on other important parts of the process (such as how the design works and looks).

Now, I just open Adobe Fireworks, create a new project, and then select what iOS device I’ll be designing for and the number of columns I’ll need. Then, the grid appears on my canvas, along with some nicely sized gutters, which help my design breathe a little easier.

Here’s what it looks like (notice the green overlay):

About The iOS Grid Extension

The extension is made for Adobe Fireworks and is optimized to help you create designs for all of Apple’s mobile devices (in both portrait and landscape modes) as of May 2013. It will be updated as new iOS devices and resolutions arrive. 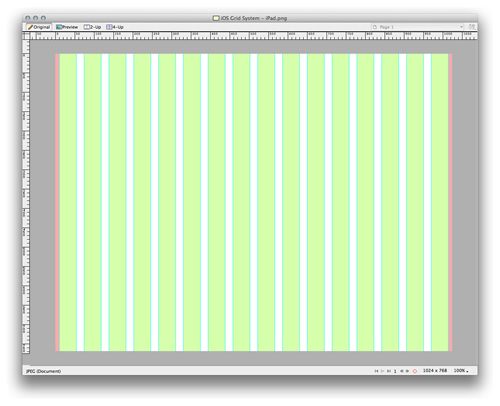 iOS Grid System will build your grid automatically on any page in Adobe Fireworks. (Large version)

Note: Apple doesn’t allow designers to specifically target the screen of the iPad Mini. To work on a design for iPad Mini, you can simply use the non-Retina iPad resolution, which is 1024 × 768 pixels.

You’ll notice that all of these grids have a few things in common:

These exact dimensions make it easy for you to have adequate space between each column, while giving you flexibility in structuring the design. This is the best combination I’ve found from experimenting with different column and gutter sizes, because I’m able to keep the same dimensions while adding or subtracting columns as I change device orientations.

When a command from iOS Grid System is run, it automatically creates two things: “guides” and “shapes.” 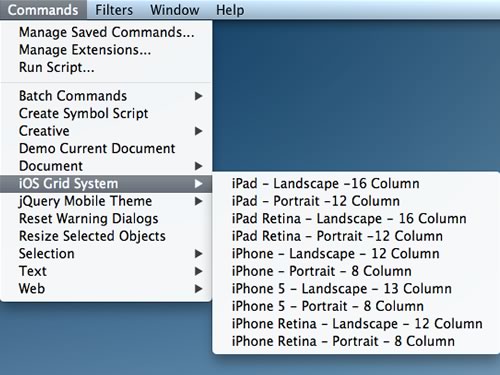 Here’s how to access the iOS Grid System commands from the “Commands” menu.

A set of guides will be placed directly on the page.

The shapes (which will serve as columns) will be placed on their own locked layer in the page, named “Grid,” and combined into one symbol. Because the shapes are added as a symbol, reusing them anywhere else in the document is easy, if that’s your thing. 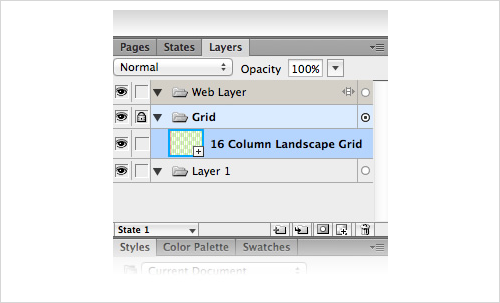 After you run a command from iOS Grid System, in the Layers panel you’ll notice that a new layer with the grid on it (contained within a single symbol) has been added. The “Grid” layer is initially locked, to prevent you from accidentally making changes to it.

The columns in the “Grid” layer have 33% transparency, and objects in your design placed on layers underneath it will be visible. But you can move the “Grid” layer to the bottom of the stack, if you prefer.

And when you don’t need the “Grid” layer to be visible, simply toggle its visibility in the Layers panel.

Can the Commands Be Run on Pages With Existing Content?

When the extension is used on a page with existing content, it will create a new “Grid” layer, move it to the top of the layers stack, lock it automatically, and then return focus to the original layer on which you were working. Smart!

It will also resize the canvas automatically (read more about that in the next section).

Size of Canvas and Cropping of Objects

Here’s another thing to keep in mind. When running a command from the set on a page that already has some objects placed on the canvas, and if the canvas is larger than the iOS device you are designing for, then some of the objects may be cropped or deleted when the canvas is made smaller. This won’t happen in all cases, though, because in Fireworks there’s a setting (in Edit → Preferences → Edit) that controls the behavior of canvas cropping:

The “Delete objects when cropping” preference can be toggled on and off by going to Edit → Preferences → Edit.

When you run the command on a page with some existing artwork on it, this preference is important to remember!

You can use any of these commands multiple times in one document. Just create a new page and select the command you wish to run, and a new set of guides and grids will be created.

(Just be careful when you try to run them multiple times on the same page. This is not recommended — things can get weird.)

Want to try iOS Grid System for yourself? Follow these simple steps:

Alternatively, you can apply the extension to existing pages as well. But keep in mind that, while existing artwork won’t be touched, the canvas will be resized (unless, of course, you run a command that matches the dimensions of the current page).

You’ve probably already figured out that I love grids and find them very useful. If you use Adobe Fireworks for iOS design, I hope that this grid system will help your design grow as you maintain it.

I’m also curious to see how and where you use it. Share a link to your app or mobile website. We’d love to see it in action!

Now let’s open it up to your suggestions for improvements. This idea has existed (mostly) in a vacuum up until now, and these kinds of things always benefit from other people’s suggestions. For example, I’m curious if anyone would prefer to use templates, instead of commands that run on a per-page basis. Or perhaps you’ve found a bug somewhere.

I would greatly appreciate all kinds of feedback!

Of course, any questions about how to use this extension are welcome, too. Just leave a comment — I’d be happy to help.