Philip Tellis is a geek, speedfreak and Chief RUM Distiller at SOASTA where he works on the mPulse product. mPulse helps site owners measure the real user … More about Philip Tellis ↬

In Part 1 of this series, we had a look at how the underlying protocols of the Web work, and how we can use JavaScript to estimate their performance characteristics. In this second part, we’ll look at DNS, IPv6 and the new W3C specification for the NavigationTiming API.

In Part 1 of this series, we had a look at how the underlying protocols of the Web work, and how we can use JavaScript to estimate their performance characteristics. In this second part, we’ll look at DNS, IPv6 and the new W3C specification for the NavigationTiming API.

Every device attached to the Internet is identified by a numeric address known as an IP address. The two forms of IP addresses seen on the open Internet are IPv4, which is a 32-bit number often represented as a series of four decimal numbers separated by dots, e.g. 80.72.139.101, and IPv6 which is a 128-bit number represented as a series of multiple hexadecimal numbers separated by colons, e.g. 2607:f298:1:103::c8c:a407.

These addresses are good for computers to understand; they take up a fixed number of bytes and can easily be processed, but they’re hard for humans to remember. They’re also not very good for branding, and are often tied to a geographic location or an infrastructure service provider (like an ISP or a hosting provider).

To get around these shortcomings, the “Domain Name System” was invented. At its simplest form, DNS creates a mapping between a human readable name, like “www.smashingmagazine.com” and its machine readable address (80.72.139.101). DNS can hold much more information, but this is all that’s important for this article.

For now, we’ll focus on DNS latency, and how we can measure it using JavaScript from the browser. DNS latency is important because the browser needs to do a DNS lookup for every unique hostname that it needs to download resources from — even if multiple hostnames map to the same IP address.

The simple way to measure DNS lookup time from JavaScript would be to first measure the latency to a host using its IP address, and then measure it again using its hostname. The difference between the two should give us DNS lookup time. We use the methods developed in Part 1 to measure latency.

The problem with this approach is that if the browser has already done a DNS lookup on this hostname, then that lookup will be cached, and we won’t really get a difference. What we need, is a wildcard DNS record, and a Web server listening on it. Carlos Bueno did a great write-up about this on the YDN blog a few years ago, and built the code that boomerang uses.

Before we look at the code, let’s take a quick look at how DNS lookups work with the following (simplified) diagram: 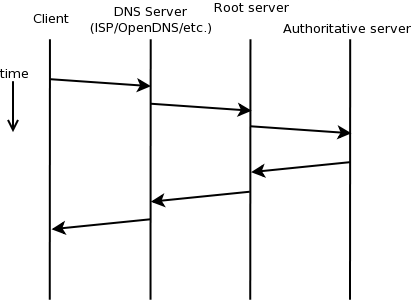 From left to right: The client here is the browser, the DNS server is (typically) the user’s ISP, the Root name server knows where to look for most domains (or who to ask if it doesn’t know about them), and finally the authoritative server which is the DNS server of the website owner.

Each of these layers has their own cache, and that cache generally sticks around for as long as the authoritative server’s TTL (known as “Time To Live”) says it should; but not all servers follow the spec (and that’s a complete topic for itself).

Now, let’s look at the code:

Let’s step through the code quickly. What we’ve done here is the following:

There are two downsides to this approach though. First, it measures the worst case DNS lookup time, i.e. the time it takes to do a DNS lookup if your hostname isn’t cached by any intermediate DNS server. In practice, this isn’t always the case. There isn’t an easy way to get around that without the help of browsers, and we’ll get to that later at the end of this article.

The IPv6 test in boomerang helps you determine if your users have IPv6 support and how their IPv6 latency compares to IPv4 latency. It doesn’t check to see if their IPv6 support is broken or not (but see Google’s IPv6 test page if you’d like to know that).

There are two parts to the IPv6 test:

The first test tells us if the user’s network can make IPv6 connections. The second tells us if their DNS server can lookup AAAA records. We need to run the test in this order because we’d be unable to correctly test DNS if connections at the IP level fail.

The code is very similar to the DNS test, except we don’t need a wildcard DNS record:

Yes, this code can be refactored to make it smaller, but that would make it harder to explain. This is what we do:

There are other ways to test IPv6 support with help from the server side, for example, have your server set a cookie stating whether it was loaded via IPv4 or IPv6. This only works well if your testing page and your image page are on the same domain.

The NavigationTiming API is an interface provided by many modern browsers that gives JavaScript developers detailed information about the time the browser spent in the various states of downloading a page. The specification is still in a draft state, but as of the date of this article, Internet Explorer, Chrome and Firefox support it. Safari and Opera do not currently support the API.

The diagram below explains the order of events whose time shows up in the object. Let’s look at a few of them: 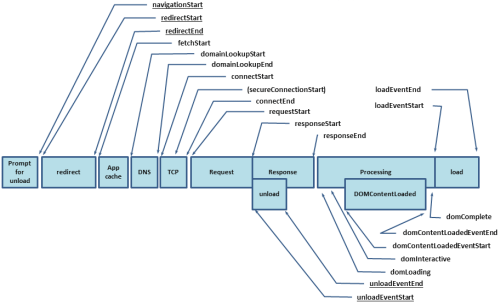 Now the items we’ve been interested in measuring are:

Important: We use a combination of times from window.performance.timing to determine each one of these.

While this looks good for the most part, and really tells you what your users experience, there are a few caveats to be aware of. If DNS is already cached, then DNS latency will be 0. Similarly, if the browser uses a persistent TCP connection, then TCP connect time will be 0. If the document is read out of cache, then network latency will be 0. Keep these points in mind and use them to determine what fraction of your users makes effective use of available application caches.

The Navigation Timing interface provides us with many more timers, but several of them are restricted by the browser’s same origin policy. These include details about redirects and unloading of the previous page. Other timers related to the DOM already have equivalent JavaScript events, namely the readystatechange, DOMComplete and load events.

Another interesting network related API is the Network Information API. While not strictly performance related, it does help make guesses at expected network performance. This API is currently only supported by Android devices, and is exposed via the navigator.connection.type object. In particular, it tells you whether the device is currently using Ethernet, Wi-Fi, 2G or 3G.

An article I highly recommend reading would be David Calhoun’s piece that shows some good examples on Optimizing Based On Connection Speed. Both the article and the comments are useful reading.

While the Navigation Timing API provides easy access to accurate page timing information, it is still insufficient to draw a complete picture. There is still some benefit to estimating various performance characteristics using the techniques mentioned earlier in this series.

Whether we need to support browsers that do not currently implement the Navigation Timing or get information about resources not included in the current page, be sure to find out more about the user’s network bandwidth or whether their support for IPv6 is better or worse than their support for IPv4 — a combination of methods gives us the best all-round picture.

All of the techniques presented here were developed while writing Boomerang though not all of them made it into the code yet.

The following links helped in writing this article and may be referred to for more information on specific topics: