Web designer/Web developer with 8 years of experience in different areas of the Web starting from UX and ending with server-side programming. JavaScript and Web … More about Ilya ↬

Responsive SVG icons can be used in a lot of ways. In this article, Ilya Pukhalski digs deeper into Joe Harrison’s responsive icons technique and explores what can be done with SVGs.

If you haven’t seen Joe Harrison’s responsive icons technique yet, you’ll most probably be impressed as much as I was when I first discovered it. In this article, I’d like to explore what we can do with SVG beyond “traditional” scalable vector graphics that are used to replace bitmap PNGs.

In fact, we can see SVG as an independent module that encapsulates CSS for the customization of views as well as the responsive behavior that also encapsulates JavaScript for the interaction logic.

Now, let’s dig a bit deeper into this technique.

Harrison’s Responsive Icons website is implemented pretty simply. It follows a well-known technique: image sprites. If you’re not familiar with sprites, let me explain. Image spriting is a technique that was previously used only for raster images to combat poor network performance. The idea is to combine a lot of small images into a single file, so that the client has to download only a single image from the server.

You would also use CSS to shift the image around and display only the part that you need for a particular element, saving the user the overhead of having to download every image individually. (Read more about sprites on CSS-Tricks.)

Harrison’s technique does the same thing, except with SVG instead of PNGs. This is what all of his icons combined into a single file would look like: 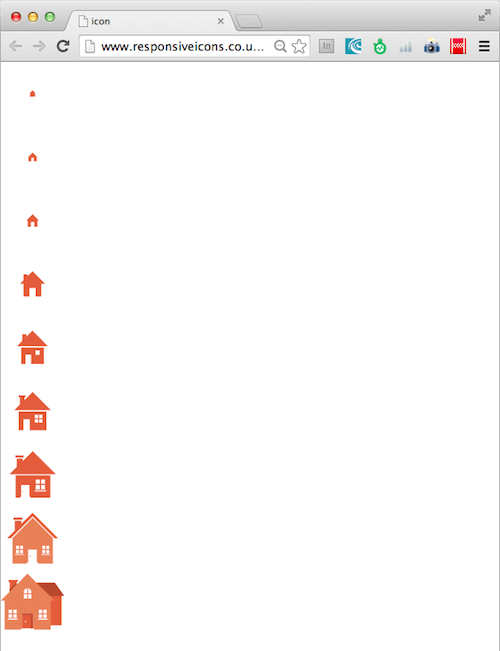 All Icons combined in a single SVG file. Large View.

This file, then, would be set as the background of a container in which one of these icon would need to be displayed:

The example above is simple enough but has some problems. The solution is not portable enough. In fact, two parts are needed to make the method work: external CSS and an SVG sprite.

Because CSS can be defined within SVG itself, let’s revise the example above to encapsulate the icon and to make it portable.

First, let’s remove all of the spatial shifts of the icons in the sprite. Of course, that leaves us with a layered mess of icons:

Then, let’s rearrange all of the shapes and group them by icon, adding an .icon class to each group, as well as numbers to be able to identify each one we want (so, #home_icon_0, #home_icon_1 and up to #home_icon_8):

Now, we’re ready to add media queries, so that we can select the icon in the SVG file that we want to display. For this purpose, writing the CSS directly in the <svg> tag is possible using <defs> tags.

As a result, the same icon now adapts to the viewport’s size — except now, the CSS rules, media queries and SVG shapes are all encapsulated in the SVG file itself. Resize your browser to see how the example below works:

Responsive SVG: The Man With A Gun’s Method

The example above looks better than the first one, but questions remain:

Looking to the content choreography and layout restructuring tricks that we rely on for responsive Web design on a daily basis, we can improve our prototype even still. We’ll use responsive design, shape restructuring and transformations to adapt the icons to different viewport sizes.

First, let’s redraw the biggest and most detailed house icon in our SVG sprite file, splitting all of the paths and joined shapes into elemental shapes. The result is much more readable, and applying any transformations to any part of the icon is now possible:

Our redrawn icon looks the same as the biggest one from the sprite but contains many more shapes and takes up a bit more space. The magic is that we’ll add media queries and transformations to the new variant, transforming the shapes of the icon itself to get the same result as the SVG sprite:

Once we’ve added a bit of transformation magic, the icon will behave just like Joe Harrison’s SVG sprite but will contain all of the logic within itself. Open the example below in a new window and resize it to see all of the icon variants.

Adapting The Icon To The Parent Container’s Size

One more thing. Making the icon respond to changes in its parent container (at least the width and height) is possible, too.

To do this, first, I tried to load the SVG file in an img element, wrapped in a div. But not even one media query in the SVG file seemed to work.

My second attempt was to load the icon in the flexible object element, wrapped in a div. Doing that made all of the media queries work. And making an object fill the space of its parent is now possible, too. (Don’t forget to set the width and height attributes of the svg element to 100% or to remove them completely.)

As for other ways to embed SVG with media queries and transforms, you could use SVG as a background image for any block element. Inline SVG is allowed as well, but the media queries would respond to the viewport.

The example below demonstrates how the icon responds to different container sizes. The media queries in the SVG handle how the icon is drawn, according to the dimensions that the SVG is to be rendered in. Here are eight blocks with different sizes, embedded with one and the same SVG file.

More good news! The SVG file may encapsulate not only CSS, but JavaScript, too. In essence, we can regard an included SVG file as an independent module to which any old markup language may be applied.

JavaScript in SVG will work perfectly when embedded inline in the <object> element. Such a wonderful world, huh?

This last and most complex method of using SVG with media queries and transformations behaves perfectly in the following browser versions:

The technique might work in the old versions of browsers, but some transformations, such as scaling, wouldn’t be applied.

Responsive SVG icons can be used in a lot of ways, including the following:

I should state that nothing is wrong with the sprites technique proposed by Joe Harrison. It works, and it’s necessary for some purposes!

Thoughts? Feedback? I look forward to your input in the comments section below.

Cheers, and have fun!