As a UX researcher, I’m always looking for novel ways to present information to the different audiences I work for. My collaborators and clients aren’t limited to UX designers, software developers and UI visual designers.

As a UX researcher, I’m always looking for novel ways to present information to the different audiences I work for. My collaborators and clients aren’t limited to UX designers, software developers and UI visual designers.

I regularly conduct studies for executives who are responsible for business strategy, product planning, operations, sales and marketing, and professional education. At the conclusion of each study, my challenge is to create a final deliverable tailored to a specialized audience.

In the past, my user-research deliverables have consisted of short videos, concept feedback, games, workshops, competitor audits, strategy documents, customer journey maps and very detailed personas. It was only recently that I thought a comic book would make a fine user-research deliverable. Sure, it might seem strange to create a comic book in a staid corporate environment, where they are thought of primarily as light entertainment. But it’s not strange at all. 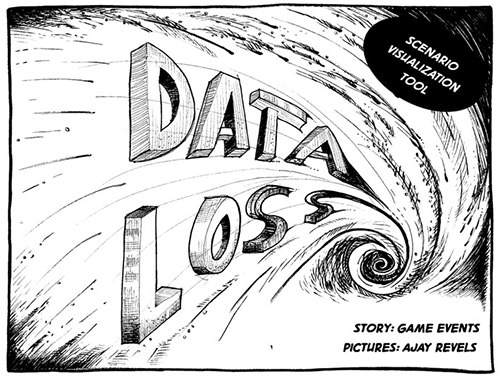 A comic book can be used to visualize scenarios. (Large preview)

Comic books are actually a very effective means of communicating difficult concepts to diverse audiences. Why? Because a comic book uses pictures, words and actions to make tricky topics easy to follow and understand. In contrast, a typical UX wireframe, strategy deck or functional specification document will often use “tech speak” and special shapes to communicate ideas.

In fact, sequential art, in the form of comic books, has been used in the US to effectively communicate a range of complex topics, such as military equipment maintenance in the 1950s. A prime example is PS Magazine, written by Will Eisner. 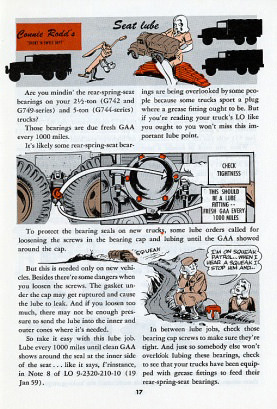 In 2006, Sid Jacobson and Ernie Colón wrote The 9⁄11 Report: A Graphic Adaptation to illustrate, “word for word the original report… even including the Commission’s final report card.” In October 2011, the U.S. Centers for Disease Control and Prevention (CDC) published “Preparedness 101: Zombie Apocalypse” to explain how to act in the face of a major “plague.” And in 2012, Kevin Cheng applied methods of sequential art to illustrate the process of planning for new technology products in See What I Mean.

In this article, I will discuss why I created a comic book to help a group of executives explore a business scenario that has multifaceted problems and is set in an imaginary future. I will also talk about how the comic book helped the executives experience the strategic and emotional impact of the problems and how it helped them noodle over possible solutions. Finally, I’ll provide some guidelines for UX designers who would like to use comics or sequential art to illustrate open-ended business scenarios.

Let’s start with a thorny concept most of us have heard of: cybercrime. It’s a mature industry with an extensive professionally run underground economy. As you might know, the cybercrime economy is based on the development and distribution of sophisticated tools to carry out large-scale fraud attacks, consumer-data breaches and politically motivated distributed denial-of-service (DDoS) attacks. These attacks on financial institutions, retailers and governmental agencies result in the loss of billions of dollars every year.

Now, imagine that you’re a managing director at a large corporation. You’re going about your normal business day when… BAM! The corporate website goes down; you learn that the call center is being flooded by panicked customers; and members of the media are calling you to comment on the surge of negative comments on your Twitter page. What should you do first? How are you going to respond to this crisis and return your business’ functions to their normal state?

These and other questions were running through my clients’ minds. They wanted to investigate how they might be affected by a hypothetical cybercrime, and they were asking questions. “What if we lost electricity?” “What if we lost control of the website or our mobile apps?” “What if sensitive customer data were stolen?” “What would we do?” Instead of waiting for a crisis to occur so that they could learn from the school of hard knocks, they decided to simulate a handful of devastating “What ifs” ahead of time in the form of a game.

Fortunately for my client, games that simulate business processes have been around for a while — since the 1950s, in fact. Business-simulation games enable facilities managers, operations directors, IT managers and even business students to explore a potential crisis, test their response, identify intelligence gaps and try out recovery plans before facing the crisis — whatever it might be — in real life.

While these games tackle serious problems, they are fun and thought-provoking and can generate a great deal of insight in just a few hours of play. Let’s look at a few games that enable organizations to enter and play inside possible futures.

“We’ve been hacked!” Fourteen executives and administrators from across the business assembled in a conference room and were divided into three teams to tackle a scenario involving a data-loss crisis. One team represented the media, another represented the business, and the third became the hacker. The game took place over several hours one afternoon under the direction of a scenario master, who ran the game and recorded moves, decisions and dialog in the spreadsheet pictured below. 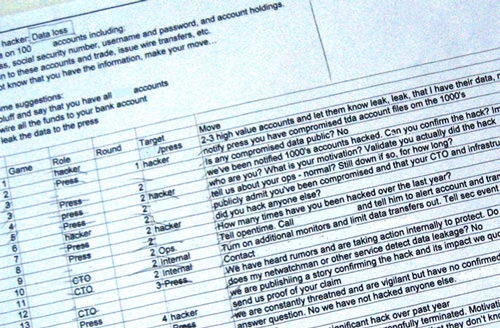 A spreadsheet is a way to record moves, decisions and dialog. (Large preview)

Once the data-loss game was played through, participants were scrambling for an easy way to:

I suggested that a comic book would be a natural solution to these needs. It would be easy to create, use, reproduce and share among the small group of players. I knew that storyboards and comics had been used successfully by UX professionals to illustrate user scenarios when designing interfaces. My book would be a slight departure in that it would illustrate an open-ended business scenario that involves multiple people with conflicting goals and no clear outcome. The book would be a thinking tool. It would not offer any clean workflows or happy endings. 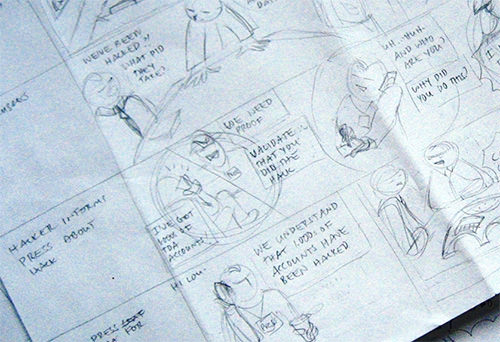 A storyboard of thumbnail sketches is a way to design the story. (Large preview)

Because I had been involved in planning the scenario game, I knew which artifacts to gather: the playing cards, the transcript of moves and dialog, and the list of team members, stakeholders and game goals. I translated the transcript of moves and dialog into 60 thumbnail-sized sketches. While this might sound like a lot of work, it took only four hours to complete, and the entire story fit onto four pieces of 11 × 17-inch (or A3) paper. This storyboard, or “wireframe,” made it easy for the scenario master and I to quickly arrange the scenes into a sequence that matched the overall flow of the game.

I designed each page to be a standalone worksheet that focuses on a particular problem encountered during the game, the people involved and the decisions they made. For example, the page below illustrates the probing questions of the media team and the reaction of the business team. For those of you wondering about the time required to ink the final pages, it was about one hour per page. 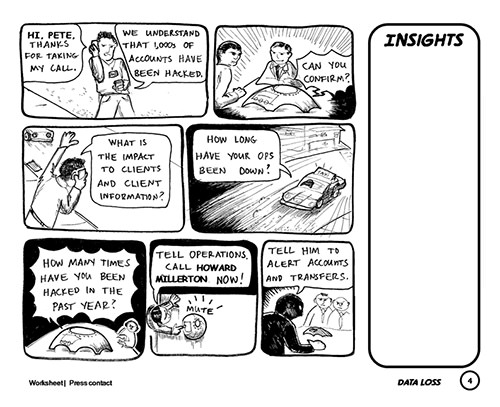 From start to finish, the book took two weeks to complete, following these basis phases:

The completed 13-page comic book consists of an introduction to the game, a list of participants, the game’s events and a few blank pages at the end for notes. Because the book was designed as a thinking tool rather than a set of recommendations, the players may remove worksheets from the book and pin them on a wall during future brainstorming sessions.

While the mechanics of creating the comic book were fairly easy, I learned a few things about designing a comic book to illustrate business scenarios, which you might find useful. 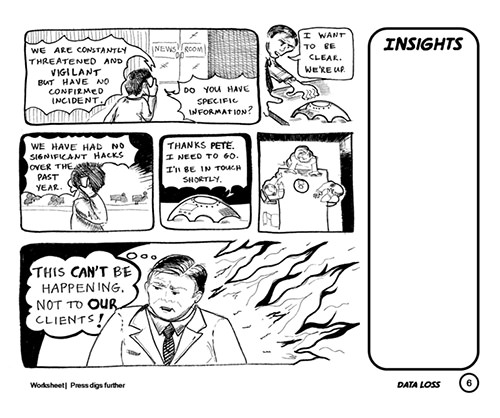 Each page focuses on a specific problem encountered by the players. (Large preview) 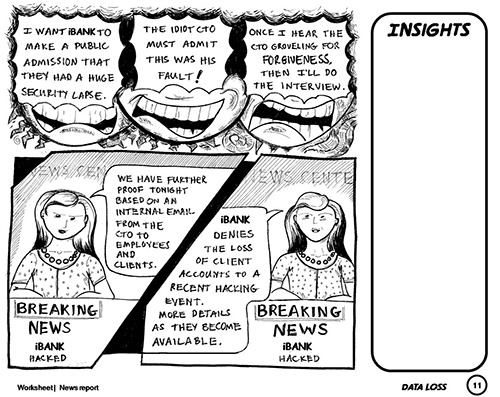 Each page depicts the emotional and factual environment encountered by the players. (Large preview)

Fortunately, my client was open to the idea of a comic book, and I was given the time to create one. But what if you are not in this situation? What if you’d like to illustrate a business problem in a comic-book format but your client or boss is skeptical or you feel that your drawing skill is limited or you simply lack the time? Consider this:

The data-loss comic book turned out to be a very effective way to illustrate the events that unfolded during the scenario-based planning game. It captured the game play better than a written report, video or slide deck could have. And it provided the participants with a way to relive particular moments of the game and to revisit their decisions and ideas.

The next time you’re looking for an effective way to communicate a complex topic, consider making a comic book!